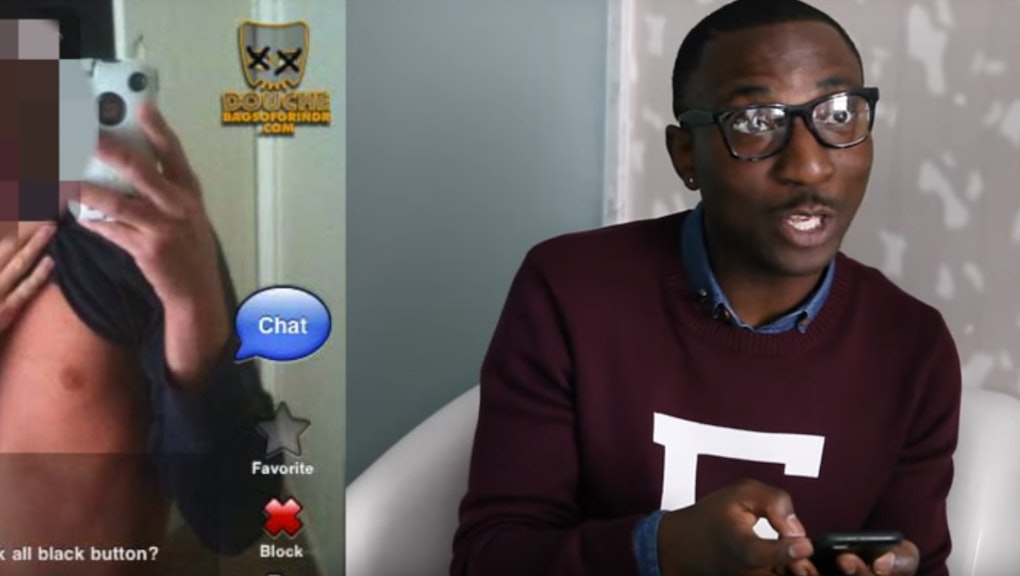 Watch These Gay Men React to Some Racist Grindr Profiles

Someday, people will be judged not by the color of their skin but by the content of their Grindr profiles. But that day is not today.

Gay YouTube star Davey Wavey posted his latest video Tuesday, where he asked various gay men, many of them men of color, to respond to real Grindr profiles.

Many of these profiles were swiped from the infamous site Douchebags of Grindr. At this point, Grindr's rampant racism has already spent enough time under the microscope. However, this wasn't so much about the racist sayings, even though those are abundant. Watch their reactions to each of the terrible sayings.

"Vanilla or spice, no chocolate nor rice..."

This person's culinary metaphor is trying to say they do not like black or Asian people, by the way.

"I'm white and attractive so sorry but if ur anything less (i.e. not white) you're not worth it. Just a preference sorry."

"I block more Asians than the Great Wall of China."

They're probably not laughing with him, they're laughing at him.

Most of the participants in the video were men of color. After reading through some of the profiles, each participant was asked to react to what they had just seen. Participant Guy Anthony said, "As a darker hue of a black person, white guys never hit on me."

YouTube star Todrick Hall told DaveyWavey, "I've had people say to me, Davey, 'You're so cute for a black guy,' which I think is the most ridiculously rude thing. If you're out there, don't ever say that to anyone."

According to a 2015 study published in Archives of Sexual Behavior, sexual racism "is closely associated with generic racist attitudes, which challenges the idea of racial attraction as solely a matter of personal preference."

Some of the participants spoke out about what they felt were the root causes of sexual racism.

"I think it comes from, growing up your whole life in every single movie, every single TV show that you see, if you're making it in the world, your boyfriend should kinda look like Zac Efron or kinda look like Justin Bieber or kind of like one of the boys from One Direction or kinda like Ryan Philippe or kinda like Channing Tatum," Hall told Davey Wavey. "I can't think of a single movie growing up, not even one, where I saw that all of the girls in the school were swooning over an Asian guy or a black guy for that matter."

Hall continued, "If you asked people, I don't think that people would be able to say what it is, I think they would just be like 'this is my preference,' but it's absolutely not just a preference. It's what we're taught, what's fed into our minds."

In an earlier interview with Mic, Kevin Nadal, executive director of the Center for LGBTQ Studies at the City University of New York, expressed observations similar to Hall and Anthony's. He said that our racial preferences often belie deep-seated feelings about race.

"In terms of romantic attractions, if somebody is not attracted to a certain race in absolutes, then that's something to question in terms of 'Why do you think that is?'" Nadal said. "What does that say about your feelings or attitudes towards that group?"

Anthony used his last comments to move away from divisive language and emphasize love.

"We're gay men and we want to be loved," Anthony told DaveyWavey. "Because ultimately we all just want to love and be loved. So why can't we focus on that part, instead of our race?"