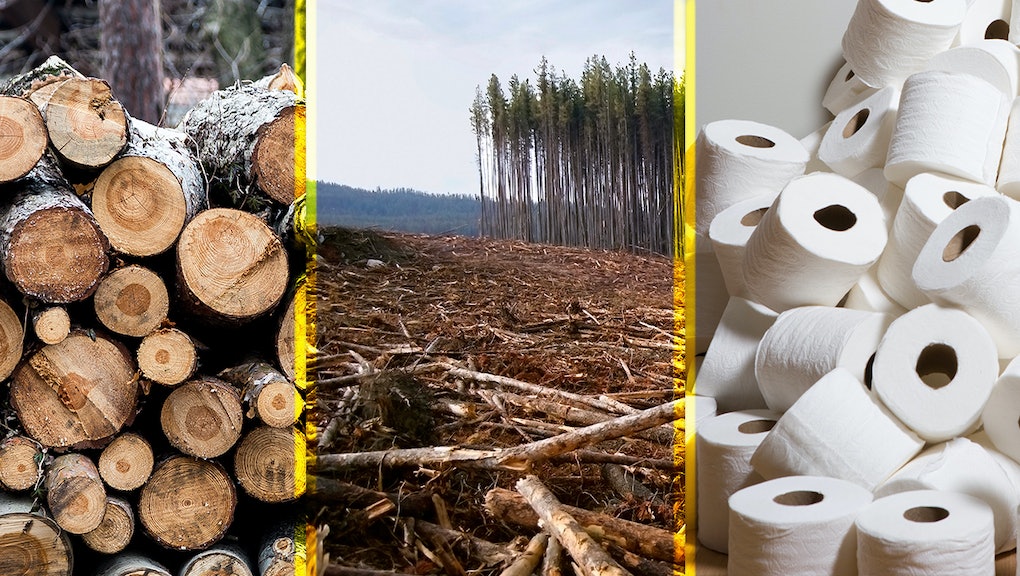 In April 2007, Sheryl Crow took the stage at Middle Tennessee State University during a stop on her Global Warming College Tour. Accompanied by activist and filmmaker Laurie David, Crow warned the audience about climate change's appetite for earthly destruction.

Global warming was daunting, she told the crowd, but there were ways we could help. Like, for instance, curtailing our toilet paper use.

"I did have one other thing," she said at the end of her list of proposals. "If everybody just uses one square of toilet tissue."

One. Square. We all know the horror of reaching for the roll and finding one remaining square, no backup in sight. Imagine using one square for everything. Could it possibly do the job?

Crow made the suggestion in jest, but it immediately took on a life of its own. "Crow calls for limit on loo paper," read one BBC headline. "Green earth = brown hand!" trumpeted conservative website Hot Air. At least one outlet made an "All I want to do is have some fun" joke. The singer eventually addressed the kerfuffle, effectively shrugging and noting it was worth it, if only to strike up a conversation about global warming.

As it happens, however, Crow's modest proposal wasn't all that off-base. In fact, she could have taken it even further: Why not get rid of toilet paper altogether?

Unfortunately, Americans love toilet paper. Given how fond we are of the stuff — we spent nearly $9.5 billion on our rolls in 2014, and we tend to use it more than any other country in the world — most of us aren't intimately aware of what it takes to produce it.

Toilet paper may disguise itself with softness and fluffiness, but it's still paper, which means it comes from trees. A lot of them.

According to environmental research organization Worldwatch Institute, citing the World Wildlife Foundation, global toilet paper production wipes out about 27,000 trees per day, which comes out to almost 9 million trees per year.

As the New York Times reported in 2009, the eucalyptus tree, one of the most common sources for toilet paper, can produce up to 1,000 rolls; on average, Americans use 23.6 rolls per person per year. Following through on the math, that means our nation of nearly 319 million sacrifices about 7.5 million trees per year to wipe our nether regions. Other estimates are higher: Justin Thomas, editor of the website MetaEfficient, told Scientific American in 2009 that the number is closer to 15 million trees; Bill Worrell, manager of California's San Luis Obispo County Integrated Waste Management Authority, told the Worldwatch Institute it was 54 million.

Ultra-fluffy toilet paper is said to be particularly problematic. (Greenpeace once argued that our penchant for soft TP was worse than driving a Hummer.)

"Fluffiness comes at a price," reported the New York Times:

Millions of trees harvested in North America and in Latin American countries, including some percentage of trees from rare old-growth forests in Canada. Although toilet tissue can be made at similar cost from recycled material, it is the fiber taken from standing trees that help give it that plush feel, and most large manufacturers rely on them.

Yet trees are only part of the problem. Like many other paper-producing operations, the creation of toilet paper requires quite a bit of water; Bill Worrell contends that each roll drinks up around 37 gallons of water. Moreover, many brands use bleach to whiten the appearance of their toilet paper. While standards have vastly improved since 1990, when the Environmental Protection Agency instituted stricter guidelines for the bleaching process, it's not foolproof.

Bidet, mate. There are other options out there — namely, that fancy French contraption called a bidet, which produces considerably less waste than wiping.

A bidet eliminates the need for toilet paper, instead using a small amount of water to clean things down there. The concept makes sense once you get past the idea of shooting a jet of water up your ass: When most parts of your body get noticeably dirty, you don't simply take a paper towel and rub them down. You wash them like the good, clean adult you are. Why should our backsides be any different?

The answer may actually be quite simple: Cultural attitudes and marketing are holding back the bidet from mainstream adoption.

"Bidets have had such difficulty," bidet expert and New York University professor Harvey Molotch explained to the New York Times in 2007. "Even all the power of capitalism can't break the taboo."

Despite the fact that they're popular virtually everywhere except the United States — and despite the fact that, along with being environmentally unfriendly, toilet paper isn't that great at keeping us clean — we still have yet to see the bidet-shaped light. While their popularity has bubbled up in recent years, Americans haven't entirely come around to the idea.

If it's the cost or heavy lifting of installation that scares you, it may be worth looking into bidet attachments, which are cheaper and less of a hassle. While they haven't yet lit up the mainstream hygiene world, they're gaining popularity as a trendy alternative to full-on bidets and toilet paper.

There's always recycled toilet paper. If you can't stomach the thought of a bidet, but you still want to do something to stem the flow of toilet paper waste, you can always try recycled toilet tissue. It doesn't solve the conservation problem entirely, but it's better than buying virgin TP.

While it's true that it's not as soft as regular tissue — the fibers are much shorter and hence not as fluffy — the environmental benefits are certainly evident. According to the nonprofit Natural Resources Defense Council, "if every household in the United States replaced just one roll of virgin fiber toilet paper (500 sheets) with 100% recycled ones, we could save 423,900 trees."

Nice, soft toilet paper may be like the Elysian Fields for our backsides, but it also swallows up a lot of trees and water. When the planet inevitably implodes from human destruction and stupidity in the next hundred years or so, your children will be kicking your grave for your shitty habit. Do them proud and stop the toilet paper waste instead.

And whatever you do, don't use butt wipes.