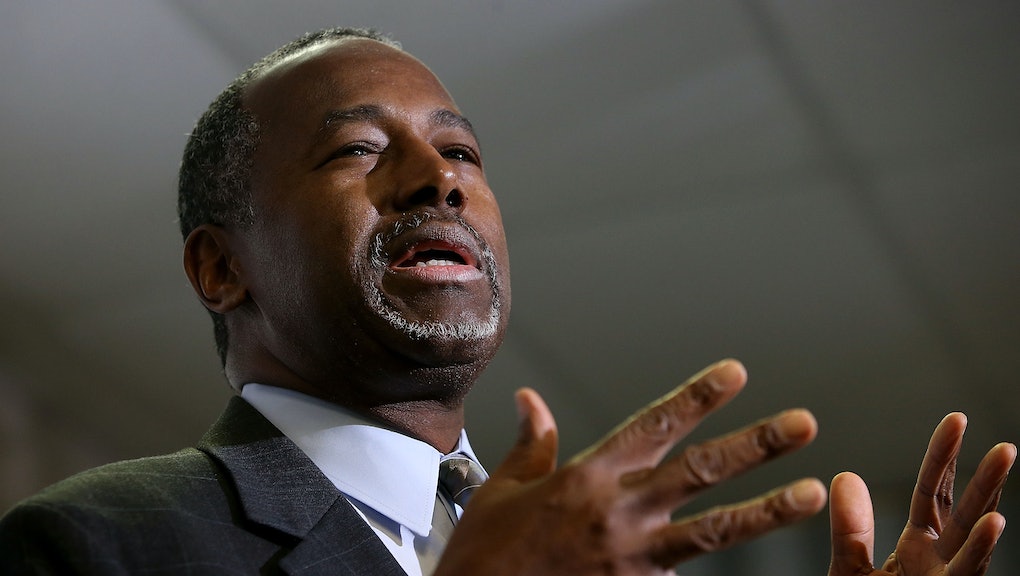 It was only a matter of time before one of the 2016 presidential candidates spent $150,000 on a campaign ad aggressively pandering to young black voters the only way anyone seems to know how — through rap music.

ABC News reports Ben Carson — who is second only to Donald Trump in the Republican polls — will be releasing a radio ad Friday in eight largely black markets.

The 58-second ad, which is available for preview below, features Aspiring Mogul, a self-described "Christian Republican rap enigma" based in Atlanta, whose verses in the song are interspersed with excerpts from Carson's stump speech.

If this doesn't make you vote Carson-Mogul 2016, there's no telling what will:

"America became a great nation early on not because it was flooded with politicians but because it was flooded with people who understood the value of personal responsibility, hard work, innovation, and that's what will get us on the right track now. I'm very hopeful that I'm not the only one that's willing to pick up the baton to freedom. Because freedom is not free and we must fight for it every day. Every one of us must fight for us because we are fighting for our children and the next generation."

Carson spokesman Doug Watts told ABC News the spot was geared toward "reaching [young black voters] on a level they appreciate and follow and see if we can attract their consciousness about the election. They need to get involved and express their voice through their vote."

Other candidates seem to think appeals to rap fandom among the youth will win them black voters too. Democratic candidate Hillary Clinton famously appeared on The Ellen Show in September and learned the "Whip/Nae Nae."

A national poll from Quinnipiac University recently had Clinton leading Carson 73% to 19% among black voters — a figure which, the Grio reports, represents the first time a Republican candidate has seen double-digit support among black voters since former President George W. Bush in 2004.

Aspiring Mogul did not immediately respond to Mic's request for comment.