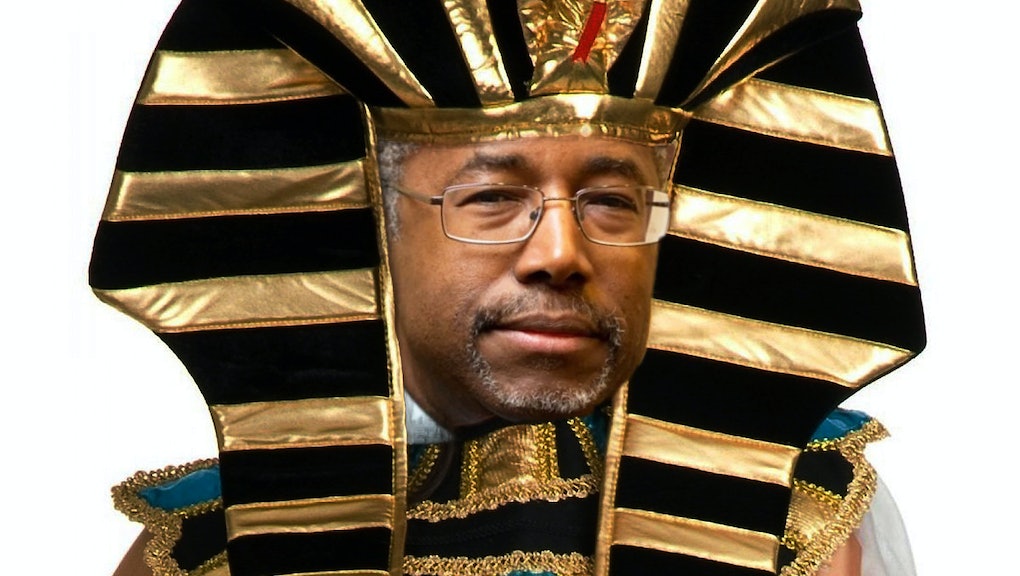 Surprise! Egyptologists Say Ben Carson Has No Idea What He's Talking About

World-famous pediatric neurosurgeon and Republican presidential candidate Dr. Ben Carson may be a leading authority on the separation of conjoined twins, but after doubling down on comments he made 17 years ago asserting that the Egyptian pyramids were constructed to store grain, Egyptologists want him to leave the speculation to the experts.

"The pyramids in Egypt were not created to store grain, nor were they ever used to store grain, as far as we know," Laurel D. Bestock, an assistant professor of archaeology and Egyptology at Brown University, told Mic through laughter. "They could not be used to store grain. While the structures themselves are very large, they're also basically solid. The amount of empty space inside the pyramid is very small. It's appropriate for a king's burial, which is what was there, but not even a ton of stuff could be put inside a pyramid. There are a couple of small rooms and passageways. You cannot store grain in large quantities in the space available."

Other experts are similarly dismissive of Carson. "Pyramids were definitely used as tombs: burial equipment, such as sarcophagi, jewelry, mummies or mummy parts were found in some of them," Deborah Sweeney of Tel Aviv University told Haaretz. "The others were robbed in antiquity, or in a few cases the burial chambers are below the water table."

But according to the current Republican front-runner, archaeologists don't know a sphinx from a hole in the ground.

What he said: Carson laid out his theory on the supposed history of Egypt's pyramids during a 1998 commencement address at Andrews University in Michigan, the flagship university of the Seventh-Day Adventist Church, of which Carson is a member. Video of the address, first unearthed by BuzzFeed, shows Carson telling the graduating class of the university that "my own personal theory is that Joseph built the pyramids in order to store grain."

Carson, who has overtaken billionaire Donald Trump as the current front-runner of an expansive Republican field of candidates, admitted during the speech that the archeological consensus was on the side of Bestock and Sweeney.

"Now, all the archeologists think that they were made for the pharaohs' graves," he said. "But, you know, it would have to be something awfully big, if you stop and think about it."

"And when you look at the way that the pyramids are made," he continued, "with many chambers that are hermetically sealed, they'd have to be that way for various reasons."

Carson's belief is a reference to the story of biblical patriarch Joseph, a figure from the book of Genesis. He was sold into slavery by older brothers who were jealous of his coat of many colors, then rose to the rank of grand vizier by interpreting the dreams of the Egyptian pharaoh and predicting a seven-year famine.

According to Carson's theory, the pyramids were built, as Genesis puts it, to house "stored-up grain in great abundance like the sand of the sea, until he stopped measuring it, for it was beyond measure," harvested in a time of plenty to feed Egypt during the predicted scarcity.

It's consistent with his previous statements: The view is in keeping with Carson's biblical literalism, a staple of his Seventh-Day Adventist faith that stresses the non-figurative truth of the Christian Bible.

Carson has faced skepticism for his adherence to a literal interpretation of the Bible before: During a 2011 lecture, Carson derided the so-called "Big Bang Theory" as one of numerous "fairy tales" pushed by "highfalutin scientists." He decried Charles Darwin's theory of evolution as "encouraged" by Satan, instead stressing his own belief in the six-day creation of life on Earth:

According to an interview with CBS News on Wednesday evening, Carson's opinions haven't changed in the past 17 years.

"It's still my belief, yes," Carson said, referring to the pyramid theory. "The pyramids were made in a way that they had hermetically sealed compartments... You would need that if you were trying to preserve grain for a long period of time."

Bestock, who oversees two archaeological digs and whose research focuses on the material culture of the Nile Valley, strongly disagrees.

"This is not a matter of opinion. It's a matter of scholarship, and he is not a scholar of ancient Egypt, so his opinion is irrelevant," she said. "It's not up for a vote. We don't get to choose what the Egyptians did based on what we want. It's a matter of evidence, and there is zero evidence that the pyramids were used to store grain, nor any reason to think that they would have been."

A bid for evangelical voters? Carson's steadfast refusal to adhere to the traditional scientific consensus on issues like anthropogenic climate change, evolution or the history of the Egyptian pyramids may help explain the shocking popularity of a presidential candidate who has never held elected office and, until recently, had a limited public profile.

As an accomplished brain surgeon of devout evangelical faith, Carson embodies an uncommon crossover between the scientific community and those who are skeptical of its most basic tenets. On the campaign trail, Carson combines a famously soft-spoken affect — reporters who fail to get microphones within a two-foot radius run the risk of recording five minutes of faint whispers — with the popular narrative of Christian faith under attack.

"I'm in great danger because I challenge the secular progressive movement to the very core," Carson told WABC in October. Evangelical voters, who have not found a realistic champion in the current campaign cycle, have been particularly irked by the popularity of thrice-married Trump. Carson, with his frequent dissension within the scientific ranks and ground operations dedicated to reaching religious voters, is a natural fit for voters whose religious faith is a key factor in their political support.

So far, it's working: A Public Policy Polling poll released this week showed Carson in the lead among evangelical voters in Iowa, with 22% support. Carson is also the most popular of the current Republican candidates in Iowa among caucus-goers overall, with 74% viewing him favorably and only 13% negatively.

For those who don't subscribe to Carson's strict interpretation of the Bible, however, the idea that more than a century of archaeological consensus has been a wild goose chase may be a step too far from the mainstream — and for his political opponents, too tantalizing an issue to avoid. Trump, whose comfortable lead in national polling has been eclipsed by Carson's rise in popularity, has already spoken skeptically of Carson's belief.

"I think I'll have to put that into my repertoire when I talk about Ben," the billionaire told panelists on MSNBC's Morning Joe. "That was a strange... that was a strange deal."