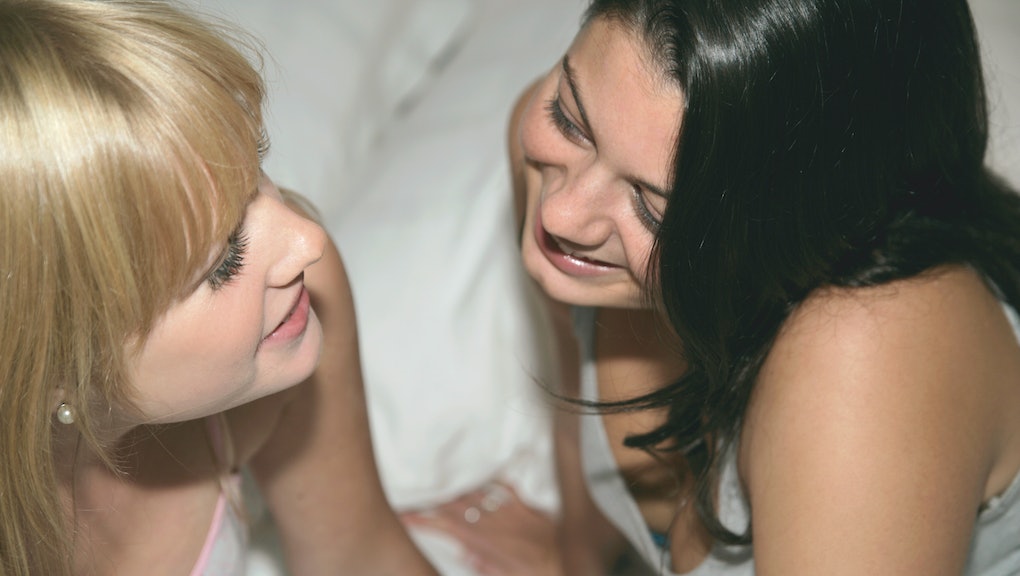 Women Are a Teeny Bit Gay, Claims Science — But the Truth Is More Complicated Than That

Human sexuality is incredibly complex, to the point that no binary system or scale or even color-coded chart can help us definitively put a label on our sexual desires. Now, researchers are claiming that female sexuality in particular is more fluid than we'd like to think, binary or Kinsey scale be damned.

According to a study published in the Journal of Personality and Social Psychology, women who participated in the experiment became sexually aroused in response to stimulating images of attractive females — whether they were heterosexual or not.

The researchers' takeaway? Even when women say they're exclusively attracted to men, they just might have some same-sex desires after all.

The study: Led by Gerulf Rieger, a psychology lecturer at the University of Essex, the study surveyed 345 female participants, some of whom identified as lesbians and others as heterosexual. Researchers sought to clarify the link between sexual orientation and "nonsexual behaviors and characteristics" — in other words, gender expression — by measuring various responses to sexual stimuli, such as whether the women's pupils became dilated while looking at images of attractive men and women.

Rieger and his team found that women who identified as heterosexual became sexually aroused in response to images of both men and women, though their responses to women typically weren't as strong as they were for women who already self-identified as lesbians. They concluded that all women are at least sort of attracted to other women, even if they say they're hetero.

"Most women responded to both videos of attractive men and women with substantial [genital] arousal as well as pupil dilation," Rieger told Mic. "Hence, in their responses many were bisexual," regardless of whether they self-identified as such.

These results did not apply to self-identified lesbians, who clearly "responded more to their preferred sex [women] over the other sex," Rieger said. "However, none of the women, not even straight women, responded more strongly to males than to females.

"Even though the majority of women identify as straight, our research clearly demonstrates that when it comes to their physiological sexual arousal, they are either bisexual or gay but never straight," Rieger said.

An ongoing discussion about female sexuality: This is not the first study to draw the conclusion that women are inherently more sexually fluid than men. Previous research by Meredith Chivers, a psychology professor at Queen's University, has also backed up the theory that women are sexually aroused by a wide range of stimuli.

In a 2007 experiment, Chivers hooked up both heterosexual and lesbian women to a plethysmograph, which measures blood flow to the vagina, a byproduct of sexual arousal. Both straight and gay women exhibited arousal after viewing footage of heterosexual and same-sex couples copulating, regardless of how they self-identified. Even images of bonobos having sex turned them on.

But instead of using the results of the study to conclude that women were inherently bisexual, Chivers suggested that evidence of arousal was not necessarily an indicator of sexual attraction. Instead, she wrote, her research indicated that female desire was a lot more complex than we think.

"To conclude that women are bisexual on the basis of their sexual responding," Chivers wrote in one study, according to the New York Times, "overlooks the complexity and multidimensionality of female sexuality."

Riegr told Mic that women might become more easily aroused than men in general because of an evolutionary mechanism meant to prevent genital trauma. "In the evolution of humans, if not mammals, females have been in many situations where sex was forced on them," he said. "To become aroused quickly to any sexual situation could mean lubrication, and ... it might have been beneficial for women to respond to any sexual situation with some level of arousal."

"When it comes to [women's] physiological sexual arousal, they are either bisexual or gay but never straight."

A complicated (and problematic) question: Evolutionary explanations aside, Rieger's findings overlook a host of outside factors, particularly the sexualization of women in the media, which could contribute even to straight women's perceptions of other female bodies as sexual objects. Men's bodies aren't sexualized or objectified in the same way (in fact, it's not even close). Our culture's tendency to objectify women's bodies, which has been chronicled again and again and again, teaches us to conclude that women are invariably sexual objects, regardless of whether we actually want to have sex with them.

Furthermore, Rieger's study neglected to address the fact that it's generally more socially acceptable for women to self-identify as bisexual than it is for men, due in no small part to cultural tropes that fetishize women having sex with other women. Such tropes, combined with the idea that women in general are more likely to be objectified than men, might play a role in conditioning women to respond to other female bodies with sexual arousal, regardless of whether they self-identify as straight or gay.

In this context, reducing the findings of the study to "women are inherently bisexual" seems more than a tad problematic, especially without considering additional cultural influences on female sexuality. It certainly can't hurt to have more evidence that labels don't even begin to explain how incredibly fluid and complex human sexuality is. But making blanket generalizations about female sexuality doesn't quite help, either.