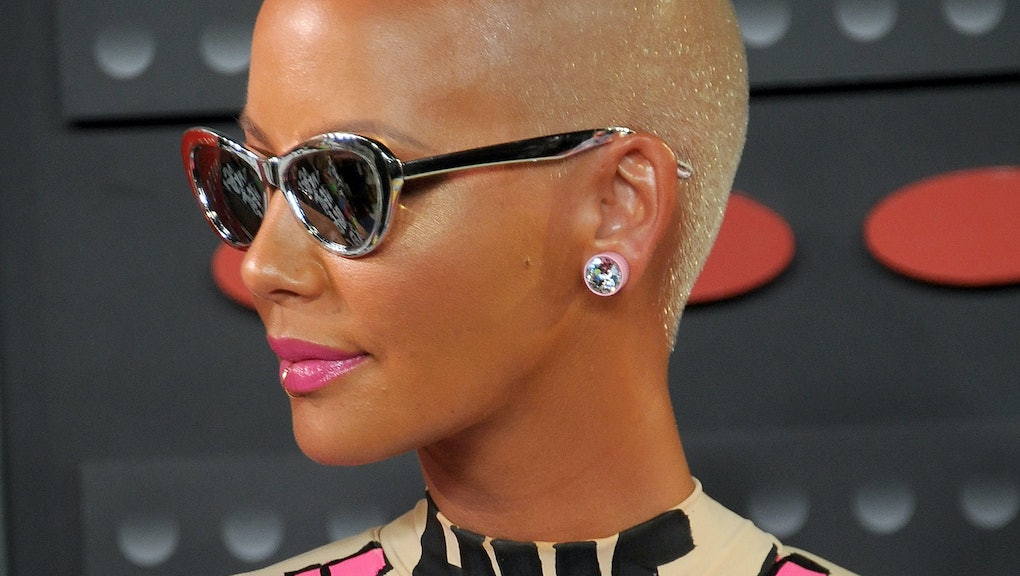 Pop culture is littered with women who've shaved their heads.

Their circumstances are usually dire: Natalie Portman sobbing violently as a jailer chops away clumps of her hair in V for Vendetta (2005); Demi Moore glaring at her own reflection as she barbers her way to belonging in the hypermasculine world of G.I. Jane's (1998) Navy SEALS.

But the truth is, speaking with the women who've actually done it — an implicit refutation of mainstream American beauty standards, whether intended or not — reveals a range of stories and reasoning that go beyond this narrative of duress.

Thought it's arguably no longer the rare practice it has been in the U.S., the women who voluntarily cut off all their hair still undergo a range of experiences that, even in 2015, say a lot about perceptions of modern womanhood.

Here are four women who've shaved their heads at one point or another — their stories as told to Mic and edited for clarity — and (gasp) lived to tell the tale:

My head was shaved in Cuba as part of a ritual ceremony. I have been a practitioner of the Cuban African-inspired religions for 12 years now [Regla de Ocho or Santería, in particular], and the act of head-shaving is part of a ceremony in the process of what they call "making Saint." In the U.S. context and language, it's part of becoming a "priestess" in the religion. Conceptually, the ceremony is about rebirth into a new, stronger spiritual self and the head-shaving is part of the symbolic birth.

The traditional process of this ritual means one cannot look at themselves in a mirror for [three] months. However, because I am [an American] and they recognized the context here was different, I had the option of [allowing mirror use].

[Leaving] Cuba, the outgoing immigration officer violated my rights and made me take my head wrap all the way off to expose my head and then took a picture. It was horrifying — not because of how I looked, but because it was so disrespectful.

The personal is political, so [for me, shaving my head was political]. But I wasn't worried about not having hair. I was just trying to manage and adjust to the sensory energy that overwhelmed me post-ritual. The sense of freedom, liberation of weight (both physical and symbolic) that came from the head-shaving and ritual allowed me to become a better self. And I do not regret it one bit.

The first time I shaved my head was right after graduating high school. I can honestly say that those four years were the worst years of my life. I'm not alone in this. I felt like I needed a fresh start, a metaphorical death —dramatic much? I needed something to help me look at my reflection without remembering who I was before that part of my life was over.

I was dubbed a lesbian soon after, to no surprise, as my masculine demeanor has done that since the fifth grade. Regardless, I kept at it and come winter, I wore head scarves, bright, gorgeous head scarves.

"I think there's definitely a stigma about women with short hair, no doubt."

By 2001, I did it again because I wanted that exquisite freedom that was so jutting and addictive. I wanted to do it for no other reason other than to feel relaxed. I started to wear men's clothing and wallowed in the comfy fabrics and bare head until I grew tired of it and went back to wearing women's clothes. Shaving my head helped me become freer. It allowed me to take on my demeanor head on. I've always, up until very recently, identified more with my masculine energy. It gave me a real sense of how adaptable I could be.

I think there's definitely a stigma about women with short hair, no doubt. But I also think that it's OK to want to feel masculine by shaving your head, or feminine by growing it out, or vice versa, be it if you're a man or a woman.

I started shaving my head my junior year in college at [University of California,] Berkeley. I did not know what to do with my hair and thought I would give it a try. I have loved it since.

"I always defer to Audre Lorde: The personal is political."

[Was it political?] I always defer to Audre Lorde: The personal is political. If my hair is part of a greater aesthetic, then it definitely is rooted in a politics of identity.

First time I shaved my head was in junior high, for a lark.

Second time was in 2001, for a friend's short film — I was basically a prop, Bald Chick on the Left. That was funny in an awful kind of way, because the shoot occurred a couple of days before 9/11, and people thought I was publicly grieving. It was a weird time.

Third shaved-head incident was summer of 2009 — I was living in Austin, Texas, and that summer was so mercilessly hot that it seemed mandatory. I kept my head Bic'd from June to October that time. It was great.

This is counterintuitive per everything we're taught about what makes ladies pretty, but I have never felt nearly as attractive, pretty or sexy as I do when I'm bald. Something to do with literally scraping off the bullshit and the window dressing and just putting my face out there. I tend to be more aggressive with makeup, jewelry and styling, as if I have a blank canvas, which is fun.

"Everything about women's personal aesthetic is inherently political and always has been."

The reactions I get are mostly curious, though I do get a lot more attention from men — the enjoyable, respectful, "Oh my you seem interesting" kind of attention. It helps that I move in liberal, weirdness-enabled circles and always have. I'd expect a much different response if I lived outside the hipster bubble.

My husband is a little ambivalent about it, though. He likes how I look completely cueball bald but is not crazy about the growing-out phase, during which I strongly resemble a 14-year-old boy.

Everything about women's personal aesthetic is inherently political and always has been, and the political content varies wildly depending on who's doing what and what her social position is. It doesn't feel political when I do it, but I'm in a very rarefied and privileged spot.

Some of the perceptions people have of women who shave their heads are that we're doing it for attention, adopting some kind of martyred rebellion against what is and isn't done. Which is, I'm sure, sometimes true, but every bald lady I've ever talked to mostly says, "Meh, it's low-maintenance and I like it."

*Name has been changed to allow subjects to speak freely on private matters.