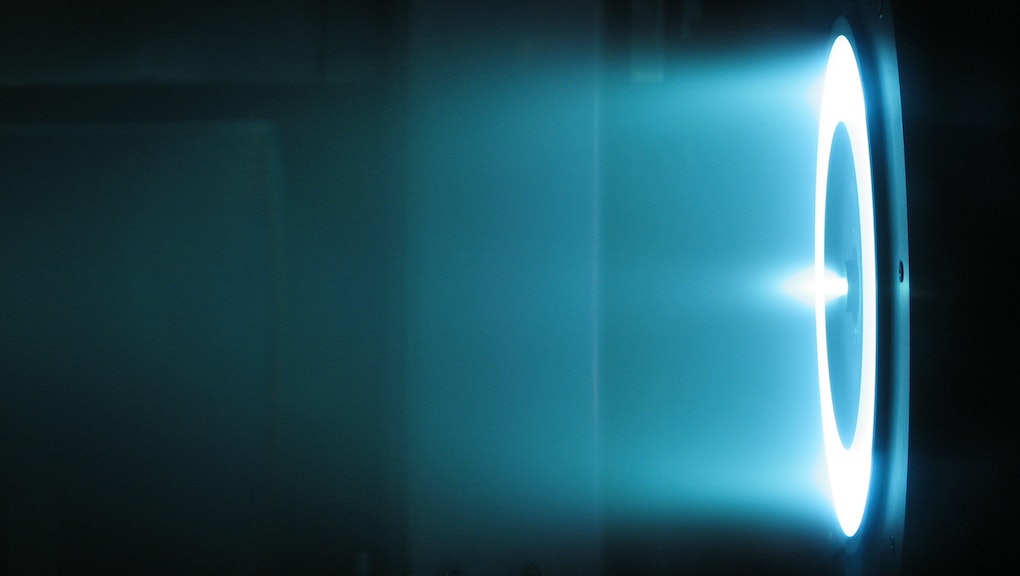 Earthlings, meet the EmDrive, the rocket of the future.

Allegedly, Eagleworks Labs at NASA's Johnson Space Center has defied a Newtonian law of physics and created a futuristic warp drive. If it's real, it could be the most exciting breakthrough in space-travel technology to date: an engine that gets from point A to point B without using any fuel — and does it crazy fast.

Despite months of skepticism, our nation's aerospace agency wants you to believe its latest findings are legit. Recent studies purportedly prove the EmDrive's authenticity. Even NASA researcher Paul March hopped on a (non-NASA-affiliated) spaceflight forum to chat about the agency's findings.

But what does it mean for us — and life as we know it? So far, not a damn thing. But if it works, that could change dramatically.

The Electromagnetic Drive, called the EmDrive, is an electromagnetic thruster (rocket) concept designed by aerospace engineer Roger Shawyer in 2001. It's a superfast engine that gives off no radiation and consumes no propellant, or fuel.

Hypothetically, it could get us from Earth to the moon in four hours.

How? Allegedly, it would use the hypothetical model of an radio frequency resonant cavity thruster, which is a magnetron, the same thing that makes the electromagnetic microwaves in your kitchen microwave.

It defies hundreds of years of physics.

The magnetron forces those waves into one end of a closed, hollow cone, where they get caught in the cone's narrow end and bounce back, then forth and so on to create acceleration. That acceleration, in turn, causes thrust to push the vessel forward.

Imagine taking 100 superballs and throwing them into the corner of a large steel box. The area of impact shrinks. The bouncing increases. And the force created should make the box move.

The method sounds bonkers, especially since our long-held beliefs about rockets lifting off involve a lot of burning fuel. After all, Newton's Third Law, the Law of Conservation of Momentum, is all about the need for an object accelerating in one direction to also create force the other way. A rocket must expend something behind it to move forward. NASA's latest findings, however, suggest that Newton's law was more of a suggestion.

Test results indicate that the RF resonant cavity thruster design, which is unique as an electric propulsion device, is producing a force that is not attributable to any classical electromagnetic phenomenon and therefore is potentially demonstrating an interaction with the quantum vacuum virtual plasma.

Which is to say: They don't know what's happening, but it is happening.

Here's why we should be cautious: NASA regularly gets us excited about groundbreaking new findings that don't really pass muster with people who don't, say, religiously follow the flight pattern of the New Horizons mission. So let's look at what the technology could hypothetically do, and why we should be excited that the research is even being performed in the first place.

If (if!) the EmDrive proves to work as expected, it verges on the idea of a perpetual motion machine, being able to travel great distances without the same sort of solid fuel used in current rocket engines. NASA researchers even allege the engine could turn trips to Mars from about 260 days to a blistering 70 days, making our current systems look like a fourth-grade track-and-field runner lining up next to Usain Bolt. On the science fiction end of the spectrum, reports claim the EmDrive could lay the groundwork for a warp drive instead of just an economically conservative propulsion system.

The problem: These latest claims are harder to validate in the wider science community, despite positive feedback on studies from the University of Dresden in Germany and Northwestern Polytechnical University in China. That "70 days" approximation goes to March's comments on the spaceflight forum, not a formal research paper. At the time of publication, neither March nor EmDrive research team leader Harold White returned requests for comment.

Ripping theories down to the bones and figuring out what the hell's actually happening is what scientists should do. Science has never been particularly excited about researchers coming back with the result, "We don't get it, but it's happening." However, it's hard to believe NASA's Johnson Space Center would let a team of scientists pay rent if they weren't onto something real — even if it defies hundreds of years of physics.