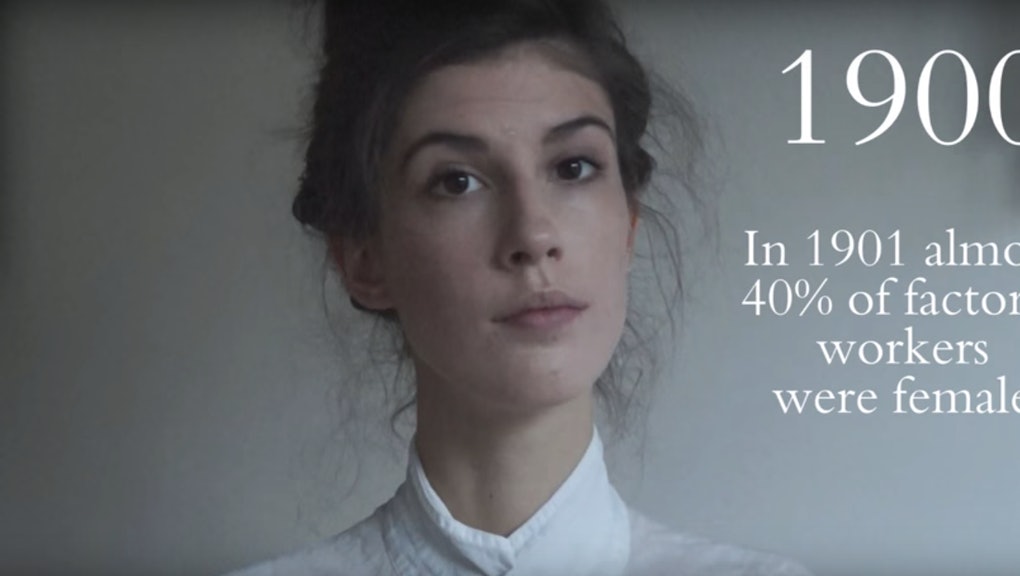 From bridal gowns over time to a century of Brazilian beauty, time-lapse videos for the history nerds in us — including Mode Video's "100 Years" fashion videos, Cut Video's "100 Years of Beauty" clips and videos from the likes of BuzzFeed — have taken off.

But for Polish blogger Karolina Zebrowska, there was always something missing. Zebrowska runs her own costume blog, Domowa Kostiumologia, and the history buff has always watched the viral "time-lapse" beauty and fashion videos with a skeptical eye.

"As a person interested in the history of fashion and beauty, it really bugged me how inaccurate some of these are," she wrote on her blog. "The beauty standards they show are almost always our contemporary stereotypes of the past decade."

In October, Zebrowska took matters into her own hands and made her own "100 Years of Beauty"-style video. This one tells the stories of what "real" women, aka a more diverse group, experienced from the 1900s to the 1940s.

Her video, titled "Real Women — Beauty Through the Decades the Realistic Way," demonstrates a stereotypical makeup-and-hair look for each decade, like many of the viral "100 Years" videos do. Then she switches to what an non-privileged, working woman would have been experiencing at that time.

Take the 1900s, for instance. You already know the Gibson Girl...

But here's what a working woman's reality was at that time:

Some of the stats given in the video reference certain countries. As Zebrowska notes under the YouTube video, "40% of factory workers were female" applies to Great Britain specifically.

For the 1910s, there's the well-known Edwardian "Titanic era," with its fancy hats and updos...

But there's also the suffragette movement:

For the 1920s, there are, of course, the ever-glamorous silent movie stars:

But also, the rise of the service industry (the stat refers to Russia):

"I thought it would be even more thoughtful to commemorate those that are so often forgotten, and in some way pay a tribute to these women," Zebrowska told Refinery29, which highlighted the video this week.

"As I was doing some research, I became more and more aware that beautiful faces and fashion we see on the photos, ads and fashion plates are just an idealistic version of reality," Zebrowska wrote under the video. "So here's to reality."

But also, the 1930s brought the low point of the Great Depression.

For the final decade, the 1940s, there are the perfect-looking Betty Grable wannabes...

But at the same time, there was the far greater likelihood of being a nurse in World War II.

Each of the "real woman" stories Zebrowska reminds us of the hardships women have faced in just the opening decades of the 20th century. That can be difficult to do in a short video.

"We consult with different guest experts and historians for each culture," Cut Video's Michael Gaston previously told Mic, describing the work that goes into the many viral "100 Years of Beauty in One Minute" videos. Authenticity and respect to each specific culture and the many women of that decade — not just the ones reified by pop culture — are key.

Zebrowska's video takes on that challenge with a specific spotlight on struggle, labor and the work women did over time. For the makeup-obsessed in the 21st century, it reminds us to recall that history isn't as glamorous as it might seem, particularly for the everyday woman.

You can watch the entire two-minute video below: