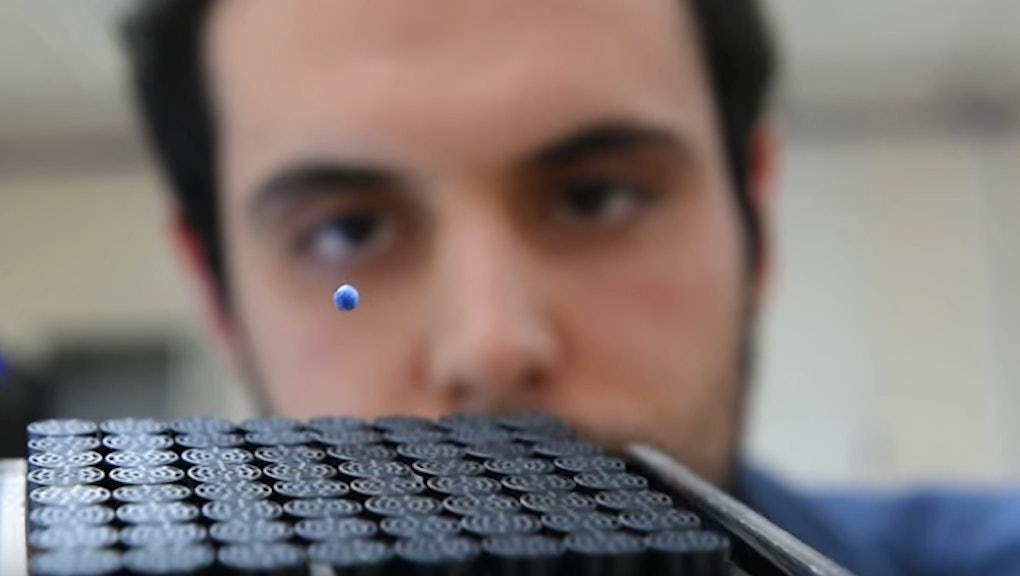 Scientists are continuing to experiment with levitating small objects using sonic tractor beams, or sound waves, which can suspend and move objects mid-air. A new video of the technology shows small objects hovering over a device made up of tiny sound speakers. The objects stay suspended even when the device is flipped upside-down.

The findings, published in Nature Communications on Oct. 27, involve a working sonic tractor beam built by researchers at the University of Sussex and the University of Bristol. The device can lift and move small objects using sound waves.

How it works: The tractor beam is made of row upon row of small loudspeakers that, when all the sound waves hit the given object, create a force that causes the object to levitate. By controlling various sounds for each loudspeaker on the beam, scientists can move the levitating object.

"Sound is a mechanical wave," Asier Marzo, a doctoral candidate and lead author of the study, said in a video explaining the device. "When you're in a concert, and the music is very loud, you can feel your chest vibrating. Basically we are taking advantage of this force, manipulating ultrasonic sound waves to make the particle levitate."

Not a new concept: Acoustic levitation is not a new concept. In 2012, scientists at the U.S. Department of Energy's Argonne National Laboratory used the technique to levitate liquid droplets, the Huffington Post reported.

In the past, however, an object had to be surrounded with the micro-loudspeakers, which restricted its movement while levitating. The new finding shows that scientists can levitate and manipulate a small object's movement with a one-sided beam of sound waves.

The research has the potential to serve a variety of key purposes, University of Sussex researchers reported. It can allow a production line to function without physical contact by assembling the objects with tractor beams. From a medical standpoint, tractor beams can carry drug capsules and small surgical tools through living tissue.