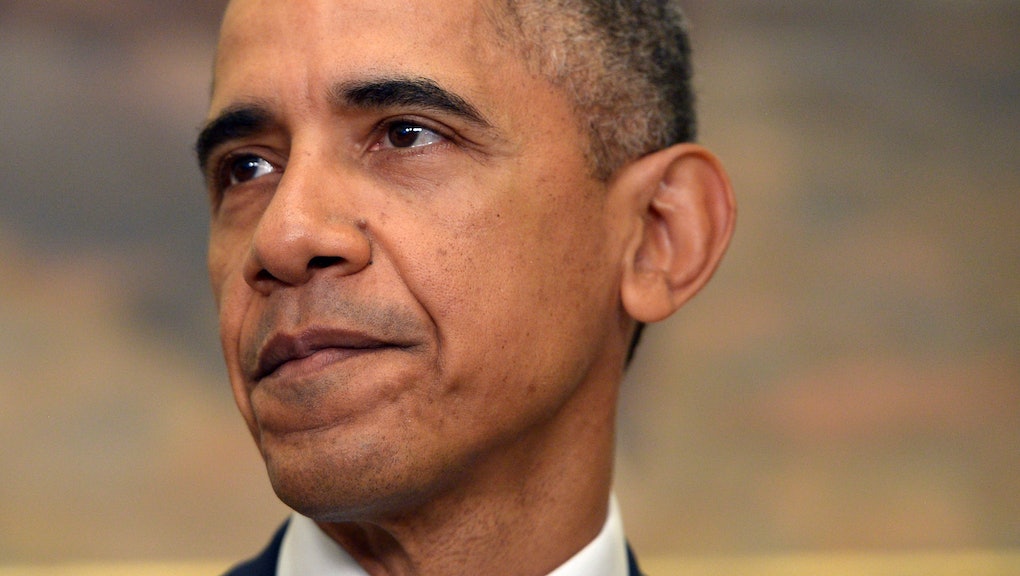 Obama Just Announced That the Keystone XL Pipeline Is Dead

After years of bruising political fights, the Keystone XL pipeline is dead.

On Friday, President Barack Obama announced from the Roosevelt Room in the White House that Secretary of State John Kerry had recommended the administration reject the proposed project, bringing an end to a years-long process that emerged as a fault line in the political battle over climate change. The president's decision is a major victory for climate change activists who have fought for years to block construction of the pipeline.

"This morning, Secretary Kerry informed me that, after extensive public outreach and consultation with other cabinet agencies, the State Department has decided that the Keystone XL pipeline would not serve the national interests of the United States," Obama said, appearing with Kerry and Vice President Joe Biden. "I agree with that decision."

Obama said he was rejecting the project because of what he said was the negligible effect on the economy that the pipeline would have, as well as improvements in energy technology since the pipeline was first proposed. He cited environmental concerns and upcoming climate change negotiations as further reasons for his decision.

"The old rules said we couldn't promote economic growth and transition to clean energy without squeezing businesses," Obama said. "But this is America, and we have come up with new ways and new technologies to break down the old rules."

The pipeline was proposed by the Canadian company TransCanada, and would have connected oil sands fields in Canada with the Gulf Coast, carrying 800,000 barrels of oil per day over a nearly 1,200-mile stretch. Shares of TransCanada tanked on the news of Obama's impending announcement, which was first reported by the Wall Street Journal.

The status of the project had been in limbo for years, as it made its way through a review process by the State Department initiated while Hillary Clinton was secretary of state. Clinton has been criticized by her Democratic rivals in the presidential race — particularly Sen. Bernie Sanders (I-Vt.), who has made his opposition to Keystone a cornerstone of his campaign — for saying in September that she opposed the pipeline, after refusing to take a position earlier in the summer.

Republicans overwhelmingly support the pipeline, arguing that its construction would create jobs and boost the economy. GOP presidential candidates reacted quickly to news of the administration's rejection:

Just last week, TransCanada requested that the State Department's review be put on hold until at least 2017, anticipating that the Obama administration would ultimately reject the project. The State Department rejected the company's request for a delay.

Obama's rejection of the pipeline comes just weeks before a major international summit on climate change in Paris, where at least 80 world leaders will attempt to hammer out a pact to curb greenhouse gas emissions and take other measures to combat the effects of climate change. The administration's decision to kill the Keystone project ahead of the meeting is seen as a good-faith measure by Obama that the United States is ready and willing to enter into an international climate pact to reduce emissions.

You can watch Obama's statement in its entirety here: