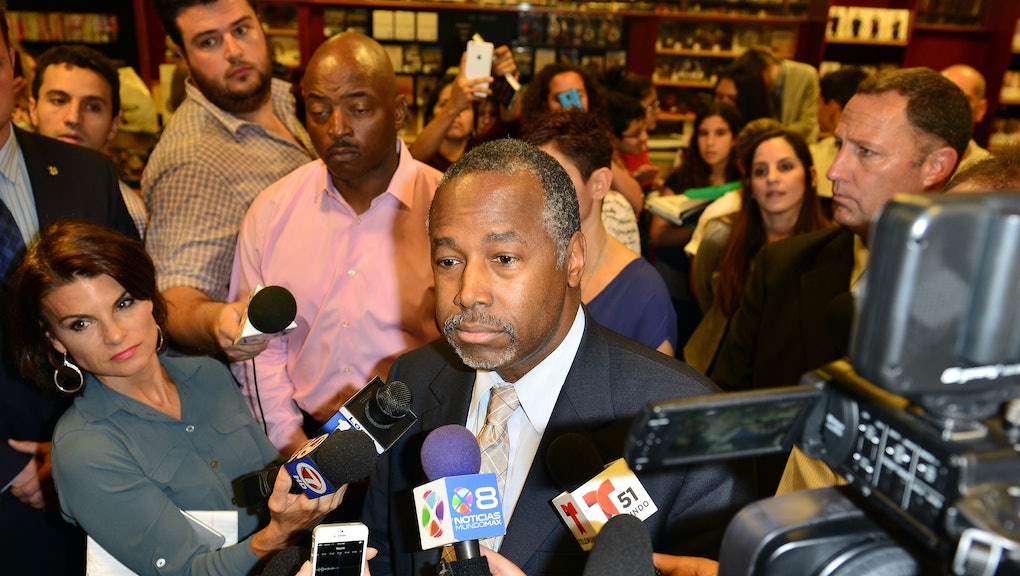 Ben Carson Admits to Lying About Getting Into West Point

Dr. Ben Carson, the former pediatric neurosurgeon turned unlikely front-runner for the Republican presidential nomination, has been caught in another lie. But unlike misrepresentations about how prisons cause homosexuality or that handguns could have stopped the Holocaust, this lie has the potential to seriously derail the doctor's bid for the White House.

On Friday morning, Carson's campaign admitted to Politico that Carson had fabricated stories about being accepted into the U.S. Military Academy at West Point, first detailed in his 1996 memoir Gifted Hands: The Ben Carson Story. The confession tears a significant hole in Carson's compelling personal narrative, which has been a major selling point in his quest for the Republican nomination.

"He considered [applying], but in the end did not seek admission," campaign manager Barry Bennett told Politico. Carson's admission comes at a time when journalists and political rivals have raised numerous questions  regarding the authenticity of other incidents in the retired surgeon's putative biography, particularly an often-repeated claim by Carson that, as a youth, he had attempted to stab a close friend or family member.

The initial story: According to Carson's account in Gifted Hands, in 1969, at the age of 17, he was introduced to Gen. William Westmoreland, former commander of American troops in Vietnam. Carson, who has said that he excelled in his ROTC program at his Detroit high school, was chosen to march in the city's Memorial Day parade alongside Vietnam veterans.

"More exciting to me," Carson wrote in Gifted Hands, "Gen. William Westmoreland (very prominent in the Viet Nam war) attended with an impressive entourage. Afterward, [Carson's high school ROTC director] introduced me to Gen. Westmoreland, and I had dinner with him and the Congressional Medal winners."

According to Carson's account, the meeting, which took place over a dinner, was followed by a "full scholarship" to West Point, the landmarked federal service academy in upstate New York that claims two American presidents among its alumni. (West Point, however, does not charge tuition, and thus does not award scholarships.) Carson wrote that although he was flattered by Westmoreland's offer, he "let them know that a military career wasn't where I saw myself going."

West Point's denial: "In 1969, those who would have completed the entire process would have received their acceptance letters from the Army adjutant general," Theresa Brinkerhoff, a West Point spokeswoman, told Politico, stating that West Point has no records indicating that Carson even applied to the academy, much less of his acceptance or scholarship. "If he chose to pursue [the application process], then we would have records indicating such," she said.

"Dr. Carson was the top ROTC student in the city of Detroit," Bennett told Politico upon being confronted with West Point's refutation. "In that role, he was invited to meet Gen. Westmoreland. He believes it was at a banquet. He can't remember with specificity their brief conversation but it centered around Dr. Carson's performance as ROTC city executive officer."

Additionally, according to records of Westmoreland's schedule provided to Politico by the Army, Westmoreland wasn't even in Detroit on Memorial Day in 1969, much less have a scheduled dinner with Carson, instead noting that on the evening in question, the general was in Washington, D.C., playing tennis.

Two words: "credibility problem." Carson's dissembling statements on his rough-and-tumble youth on the streets of Detroit have raised suspicions before, but an outright lie about acceptance to the nation's premier military academy is a huge blow to the carefully cultivated image of a down-home doctor with strong religious beliefs and a commitment to bringing change to a dysfunctional capital.

In the face of questions about the validity of other instances detailed in his autobiography, Carson has lashed out at journalists and media organizations that have attempted to determine their validity. On Friday morning, before news of his West Point fabrication broke, Carson declared an in-depth CNN story on his youth as a "bunch of lies."

"This is a bunch of lies, that is what it is," Carson told CNN in response to the story, which questioned the verity behind his claims that he attempted to stab a friend as a disaffected youth in the 1960s. "This is a bunch of lies attempting to say I'm lying about my history. I think it's pathetic, and basically what the media does is they try to get you distracted."

Carson, piggybacking on a line of attack against journalists that was hugely successful in last week's presidential primary debate in Boulder, Colorado, also accused members of the media of failing to apply the same level of scrutiny to Democratic presidential candidates. "The vetting that you all did with President Obama doesn't even come close, doesn't even come close to what you guys are trying to do in my case," he continued. "And you're just going to keep going back, 'He said this 12 years ago' – it is just garbage. Give me a break."

Coming on the heels of other discrepancies and inaccuracies in statements made by the candidate — the Pulitzer Prize-winning PolitiFact recently rated 17 statements made by Carson and deemed zero to be even partially true — Carson may find himself at the center of next week's primary debate stage in Milwaukee defending himself from accusations that he's just more of the same.