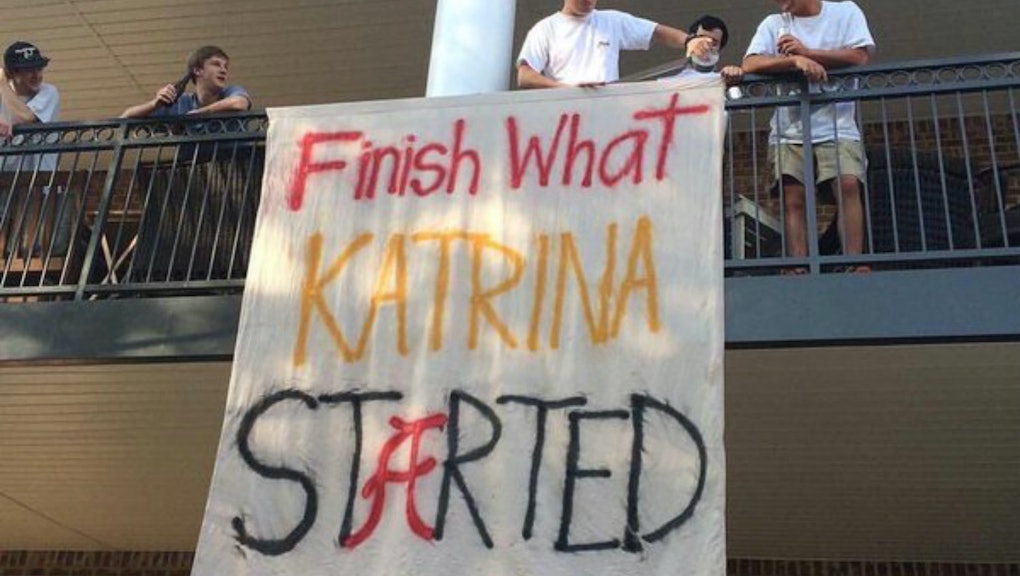 Today, the Louisiana State University Tigers are set to take on the University of Alabama Crimson Tide in Tuscaloosa. Of course, before a big game, students at Alabama wanted to show support. Students at an off-campus apartment offered their support when they hung an original banner over the balcony for their team to see: "Finish What Katrina Started."

According to SB Nation, the banner has already been removed, but not before the Charlotte Observer's Jonathan Jones snapped a pic and tweeted it out.

Other people who saw the banner had something to say as well, including LSU running back Leonard Fournette, who lost his home during Hurricane Katrina. This year marked 10 years since Hurricane Katrina blew through New Orleans, displacing millions and causing hundreds of billions of dollars in damage.

In October 2015, when LSU competed against South Carolina, the game had to move venues to LSU's Baton Rouge stadium due to the devastating South Carolina floods. Fournette auctioned his game jersey to raise funds for flood relief efforts. In an interview, he told ESPN that South Carolina's tragedy reminded him of his own efforts to survive the destruction of Hurricane Katrina.

In fact, LSU did everything they could to make their rivals feel welcome: They flew the South Carolina state flag outside the stadium and taught their band the school's fight song.

There's a lesson in hospitality.