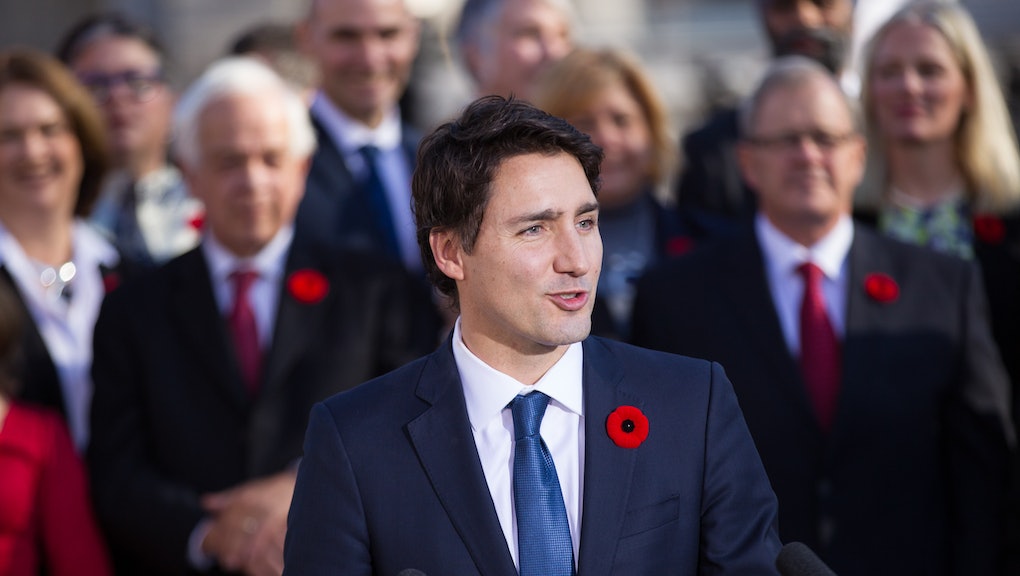 Ever since his election in October, it's been an internationally agreed-upon fact that Canadian prime minister Justin Trudeau could...

He's got great hair. He's tall. He has nice eyes. Arguably, he is the best thing Canada has had to offer since bacon and manners. Considering all of that, he could be a killer robot, but honestly we could get over that.

But the reason why liberals Internet-wide are obsessing over Trudeau — Slate has called him a "prime select cut of grade-A statesman," while E! Online proclaimed him a "beautiful, sticky-sweet specimen" — isn't just because he has a great head of hair and A+ rolled-shirtsleeve game. No, it's more than that. He is what we want in a 21st-century man. He's smart. He's capable. He is equal parts beauty and power.

Based on what we know about relationships today, there are some very real reasons why a guy like Trudeau is captivating the millennial imagination so fervently.

As a politician, he's naturally confident. The relationship between sex and political power is something we've felt, as a nation, since forever. (Hello, JFK, or the less popular but equally valid choice, 14th U.S. president Franklin Pierce.)

A politician has a specific type of allure. Maybe it stems from the power that comes with the position, or maybe it has to do with their intelligence. But most importantly, politicians like Trudeau are confident in a way that makes us think that he's secure with his masculinity and wouldn't be intimidated by an independent, successful partner, a la Nicki Minaj and Meek Mill. That type of confidence is something women in particular look for when they're at their reproductive peak: According to the American Psychological Association, "fertile women [are] more interested in short-term relationships with men who [come] across as confident."

Put it this way: If you were to go on a romantic dinner date with Trudeau, he seems like the type of guy who wouldn't try to order for you, or would take hours figuring out whether he wants dressing on the side or mixed into his Caesar salad. Instead, he'd take a backseat and let you order a basketful of mozzarella sticks, because he respects your authority as a strong, self-sufficient, mozzarella-stick-loving individual.

He's a feminist. Looks aside, what Trudeau is bringing to the political landscape is really what's making us sweat.

In terms of gender equality, Trudeau walks the walk, rather than just talking the talk. For instance, consider his dedication to making his cabinet 50% female and racially diverse. When asked why he decided to bring in more women then ever before, he famously uttered the words "Because it's 2015," launching the feminist world into a straight-up tizzy.

Look, even the woman in red behind him at that press conference where he said those tantalizing words is biting her lip out of sheer, uncontrollable desire.

He's part of a powerful and balanced duo. Trudeau's wife, Sophie Gregoire-Trudeau, is cool as hell. Before snagging this beautiful man, she was a journalist covering pop culture and media. She's been outspoken about her struggle with bulimia, and she's an ardent supporter of Canada's aboriginal communities, with many other charitable credits to her name.

Together, the Trudeaus form an ambitious, talented power couple. Their relationship dynamic has resonated with many young people today, in part because it's reflective of a dynamic that frequently plays out IRL. According to a recent Pew survey, nearly 46% of two-parent households have parents that both work full-time, requiring partners to share domestic duties while advancing their careers. Since they started dating in 2003, the Trudeaus have juggled their careers with their family life, and they've done so admirably.

As a parent to three young children, Trudeau definitely checks these boxes. Even with the hectic schedule of a politician, he clearly takes fatherhood seriously, recently speaking out about the dangers of absent fathers. On the campaign trail, his children were popular figures themselves, even trotting around with dad on Election Day.

So, yes, Trudeau mania is a little silly, but it does shine a light on how crucial it is to have a man in politics who is aware of the workplace and parenting challenges facing millennials today. So far, he's come out strongly in favor of issues left-wing Canadians care about, such as childcare plans, parental leave and equal pay. Obviously, people are paying attention to him because of his looks, but really it's his strong progressive, feminist policies that are making everyone weak in the knees.

We can't help but applaud his existence.