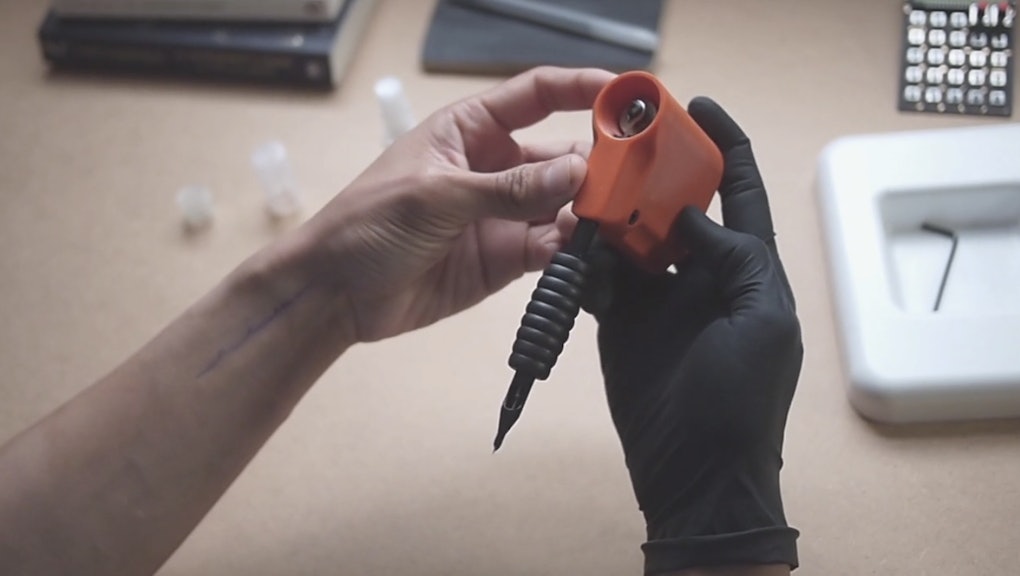 This Personal Tattoo Gun Will Let You DIY Your Own Ink

Imagine this: One day, you're bored. So bored that you start looking up all the tattoos you've ever wanted. A random number on your hand, perhaps. An insignia on your wrist. You'd typically go to a tattoo artist, shell out a bunch of money and get it done yourself.

But with a recent invention by Royal College of Art graduate Jakub Pollág, there's a possibility that you could tattoo yourself in the comfort of your own home.

And no, we're not talking about shaky stick-and-pokes here either.

Pollág's "Personal Tattoo Machine," created in June, aims to democratize the tattoo industry by giving people (with possibly little to no tattoo training) the ability to tattoo themselves in a more professional manner. The motorized device comes with a DIY kit with all the necessary parts, like sterilized needles, tubes, rubber gloves and antiseptic lotion.

Pollág, who is the co-founder of the design studio Studio deFORM, isn't only hoping to democratize tattooing; the goal is to also make is more meaningful, as more and more people decide to tattoo themselves or a friend. When done by oneself, the experience can be transformed into a deeply personal one.

"The aim is to enhance tattoos that are not about aesthetics, instead their main function is to reflect meaningful memories," Pollág told Designboom. "Due to their permanent nature, it is important that they are honest and exclusive."

Pollág's invention, which is not yet on the market, speaks to how emotional and private tattooing can be.

Tattoo designs are not just about uplifting messages or inspiring quotes; as Mic has reported, tattoos can mark an event in someone's life they're proud of enduring, like depression or breast cancer, and carry deeper meaning than any onlooker may realize. Tattoos are a way of memorializing a moment or a feeling, which is what makes them special.

The DIY element of Pollág's project speaks to that emotional process, one that some people may want to undergo with a friend or alone rather than with a stranger.

"For me it's more about materializing memory and freezing a moment in time," Pollág told Dazed. "For me they are stories rather then pictures, and they are very personal. Only the person getting them done really knows why. That is why I have all of mine under my clothes."

Pollág's plan to democratize and personalize the process also includes making sure the machine goes for somewhere between 50 to 60 pounds, which is about $75 to $90 in the U.S.

Of course, there are going to be those freaked out about the possibility of waking up with awful, life-ruining tattoos. (It's hard not to envision drunken apartment parties where the tattoo gun emerges around 2 a.m.) But the flip side of "tattoo regret" is that a tattoo is a loving memorial of who you were on that day, in those hours that you got it — even if you change as a person.

The U.S. tattoo industry isn't formally regulated by the Food and Drug Administration, which only "monitors" for specific issues; instead, regulations are handled by states. So it remains to be seen how the tattoo gun will be rolled out, should it hit the market for real.

In the meantime, those nervous about regret might want to consider all the cool temporary tattoos for adults now trending, to try it out without committing before giving DIY tattooing a spin.