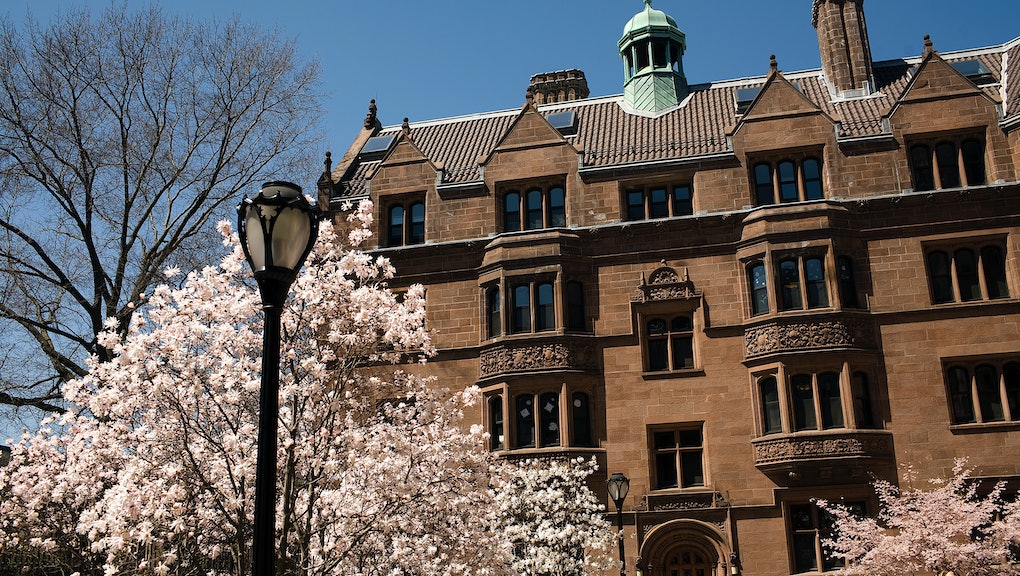 Yale University has become the setting for the latest chapter of a national saga about tensions between free expression and social inclusiveness that's generated tremendous controversy at several college campuses over the past year.

This particular episode can be traced back to an exchange over what's appropriate to wear on Halloween.

In the run-up to the holiday, the university's Intercultural Affairs Committee sent out an email discouraging students from wearing costumes that degrade minorities and marginalized communities.

"Yale is a community that values free expression as well as inclusivity," the email said. "And while students, undergraduate and graduate, definitely have a right to express themselves, we would hope that people would actively avoid those circumstances that threaten our sense of community or disrespects, alienates or ridicules segments of our population based on race, nationality, religious belief or gender expression."

There is some context for the missive: As Vox's Libby Nelson notes, Yale has had at least one incident involving students wearing blackface during Halloween in the not-too-distant past. Furthermore, one of the administrators who sent out the note at Yale wrote a very similar reminder to students while at Northwestern University in 2010, just a year after a blackface controversy on that campus.

But the reaction on campus to the Yale email, first by two dissenting faculty members, then by hundreds of students incensed by their challenge, has brought to the fore how expressing hurtful ideas — or defending the right to profess them — is becoming increasingly controversial in today's political climate.

The response: The first source of conflict began with a Yale faculty member's response to the email about Halloween, in which she warned against the perils of college oversight of acceptable attire.

The day before Halloween, Erika Christakis, a lecturer on early childhood development and associate master of the undergraduate residential community Silliman College, wrote an email to the members of her college saying that while she "laud[s] those goals, in theory," she was worried by the "exercise of implied control over college students":

I wonder, and I am not trying to be provocative: Is there no room anymore for a child or young person to be a little bit obnoxious... a little bit inappropriate or provocative or, yes, offensive? American universities were once a safe space not only for maturation but also for a certain regressive, or even transgressive, experience; increasingly, it seems, they have become places of censure and prohibition.

Christakis said that as a childhood development specialist, she felt it is important for young people to make mistakes and correct themselves, and it isn't the place of the university to prod or police students on the subject of expression.

"And the censure and prohibition come from above, not from yourselves!" she wrote in the email. "Are we all okay with this transfer of power? Have we lost faith in young people's capacity — in your capacity — to exercise self-censure, through social norming, and also in your capacity to ignore or reject things that trouble you?"

She also included a thought from her husband, Nicholas Christakis, a professor at Yale and the master of Silliman, who said that distasteful costumes should either be ignored or prompt a direct confrontation from affronted students — "tell them you are offended."

Christakis' wariness comes at a time when polarizing incidents at colleges across the nation that have caused some critics to believe that new norms regarding safe spaces are threatening freedom of discourse on campus. But that expression of caution was not received well by all.

Over 700 students, faculty members and staffers on campus signed a public letter lambasting Christakis' email as callous indifference to the realities of racism at Yale.

"To ask marginalized students to throw away their enjoyment of a holiday, in order to expend emotional, mental, and physical energy to explain why something is offensive, is — offensive," the note read. "Giving 'room' for students to be 'obnoxious' or 'offensive,' as you suggest, is only inviting ridicule and violence onto ourselves and our communities, and ultimately comes at the expense of room in which marginalized students can feel safe."

The Washington Post reported last week that at least some students were drafting a note calling for the removal of Christakis and her husband from their roles as masters in Silliman. During a remarkable public exchange between students and Nicholas Christakis on campus on Thursday, the confrontation got heated:

During the argument, a student yells at Christakis, "Be quiet!" When Christakis says he disagrees with her description of his duty as a master of his college, the student delivers a loud and spirited condemnation of what she perceives to be his dereliction of duty.

"Why the fuck did you accept the position? Who the fuck hired you?" the student says. "Then step down! If that is what you think about being a master, then you should step down. It is not about creating an intellectual space! It is not! Do you understand that? It's about creating a home here! You are not doing that. You're going against that."

The next day, the Christakises sent an email apologizing for the initial note that had caused the tumult.

Bigger than Halloween: Over the weekend, Yale senior Aaron Lewis published an article on Medium arguing that the firestorm over the Silliman masters and Halloween attire was just the tip of the iceberg at the school.

The same week as the Halloween debate, Lewis wrote, there was also a scandal brewing on campus over the failure of the school's dean to acknowledge allegations that some black students had been turned away from a frat party on the basis of their race. That conflict, too, culminated in a public confrontation involving scores of students encircling a university administrator, and it also was followed by an email from the administrator expressing contrition, Lewis noted.

Lewis wrote that these two things are just recent manifestations of the reality of ambient racism that permeates everyday life at the college.

"The protests are not really about Halloween costumes or a frat party," Lewis wrote. "They're about a mismatch between the Yale we find in admissions brochures and the Yale we experience every day. They're about real experiences with racism on this campus that have gone unacknowledged for far too long."

On Monday, a large group of students participated in a "march of resilience" in response to the previous weeks' events.

In his article, Lewis complains that students "should not have to become community organizers just to receive acknowledgement."

That line highlights the narrow focus of the actions by Yale's disaffected students. It frames "acknowledgment" as its paramount goal, and depicts petitions to the administrative apparatus of a college as a prime vehicle for social change. In this mode of activism, the path to racial equality increasingly looks like a legalistic enterprise, one in which admission of guilt in the court of public opinion is assigned great importance.

Lewis' article ends on a note of frustration about false choices when people pit free speech against safe spaces: "There's absolutely no reason why we can't acknowledge both the value of free speech and the reality of the prejudice that students of color face every day." Indeed, the two can coexist. But advocates for the new discourse on safety sometimes veer into suggesting that they can't.