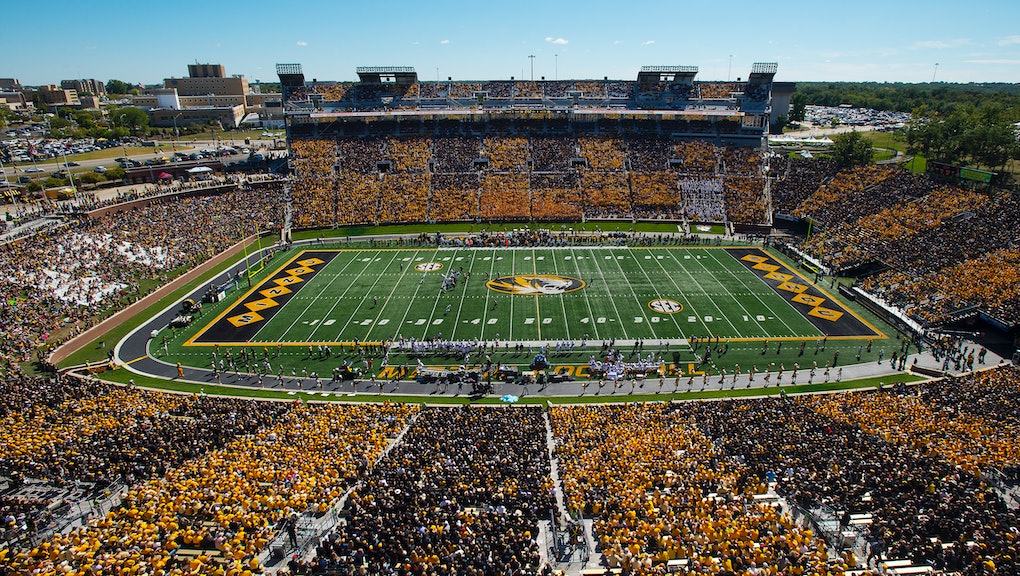 The #MizzouHungerStrike Was Always About More Than Racism — Here's Why

Payton Head is no stranger to bigotry. On Sept. 12, the University of Missouri-Columbia student associations president wrote a 472-word Facebook post detailing his experiences with discrimination on or near campus.

"I just want to say how extremely hurt and disappointed I am," he wrote. "For those of you who wonder why I'm always talking about the importance of inclusion and respect, it's because I've experienced moments like this multiple times at this university, making me not feel included here."

Head was referring to an incident where a group of men in a pickup truck called him a "nigger" repeatedly as he walked near Mizzou's Columbia, Missouri, campus that month. He also mentioned holding hands with his partner as he passed a local bar and having drinks hurled at them and being called homophobic slurs.

These incidents and others made their way into a letter penned by Mizzou graduate student Jonathan Butler, which Butler shared to Twitter on Nov. 2. The now-famous letter — which has fixed the eyes of a nation on Mizzou for a week — speaks to an intersectional array of issues on campus that go beyond the racial inequities many have chosen to focus on.

Here's what the #MizzouHungerStrike was really about.

The letter: "I will be embarking on an indefinite hunger strike in opposition to having Tim Wolfe as the University of Missouri system president," Butler wrote last week. "I will not consume any food or nutritional sustenance at the expense of my health until either Tim Wolfe is removed from office or my internal organs fail and my life is lost."

Butler's reasoning was as follows: "Since Mr. Wolfe joined the UM system as president in 2012, there have been a slew of racist, sexist, homophobic, etc., incidents that have dynamically disrupted the learning experience for marginalized/underrepresented students at the University of Missouri."

The letter specifically mentioned "graduate students being robbed of their health insurance" and "Planned Parenthood serviced being stripped from campus."

"Although these incidents individually are not [Wolfe's] fault," Butler wrote, "as a collection of incidents at the university they are his responsibility to address."

Wolfe resigned Monday morning. Pressure to do so had been mounting for a week, starting with Butler's hunger strike and culminating with members of the Mizzou football team refusing to practice or play in games until Wolfe was removed or stepped down.

The reason seemed clear at the time: The then-University of Missouri system president's failure to address racist incidents on campus — including, most recently, a swastika being drawn in feces in a dorm hallway — had caused students and administrators to lose faith in his governance.

As news outlets including CBS News, USA Today, and the Washington Post continue to frame the movement against Wolfe as stemming from these racist incidents, it's worth noting the truth is more complex. But as Butler's letter explains, his strike was about more than just racism. These other occurrences — from reduced access to reproductive health resources to revoking subsidies that had helped graduate students pay for health insurance — contributed to the pressure as well.

Together, they highlight how intersectional the #ConcernedStudent1950 movement truly has been.

When Butler spoke to Mic last week, he was clear about how diverse his support base was: "It's been a real mix of students," he said. "It spawned from the initiative of Concerned Student 1950, but includes GSA support, students fighting for undocumented people and more. LGBTQ students are involved. [Mizzou student associations president] Payton Head is black and also identifies as queer. He was called the 'n-word' as well as the 'f-word.'"

As Mic reported previously, this broad coalition was not borne just of solidarity — it carried high stakes for marginalized groups across campus. In August, for example, graduate students were told the university would no longer subsidize their health insurance coverage, citing a provision of the Affordable Care Act that prohibits employers from giving employees money to pay for outside health care, according to the St. Louis Post-Dispatch. (Some graduate students who hold teaching and research assistant positions are classified as employees by the Internal Revenue Service.) Mizzou graduate students were among those who announced walkouts in solidarity with Jonathan Butler this week.

The following month, Mizzou ended a relationship with Planned Parenthood that gave the reproductive health provider clinical privileges at a UM hospital — privileges required for all abortion providers by state law.

"Let it be known I have no ill will or thoughts of harm toward Mr. Wolfe," Butler wrote, "but I do have an urgency to make the campus I call home a more safe, welcoming and inclusive environment for all identities and backgrounds. I am a firm believer that attending to the needs of marginalized/underrepresented students is worth the time, attention and care of administration; our lived experiences are worth acknowledging and our humanity worth fighting for."

In conjunction, these events — when added to the racist and homophobic incidents cited in Butler's letter — speak to a series of desired changes that reached a boiling point last week. Whatever comes next will hinge on how aggressively these issues are tackled by school administrators — and how soon they realize this is much bigger than racism alone.