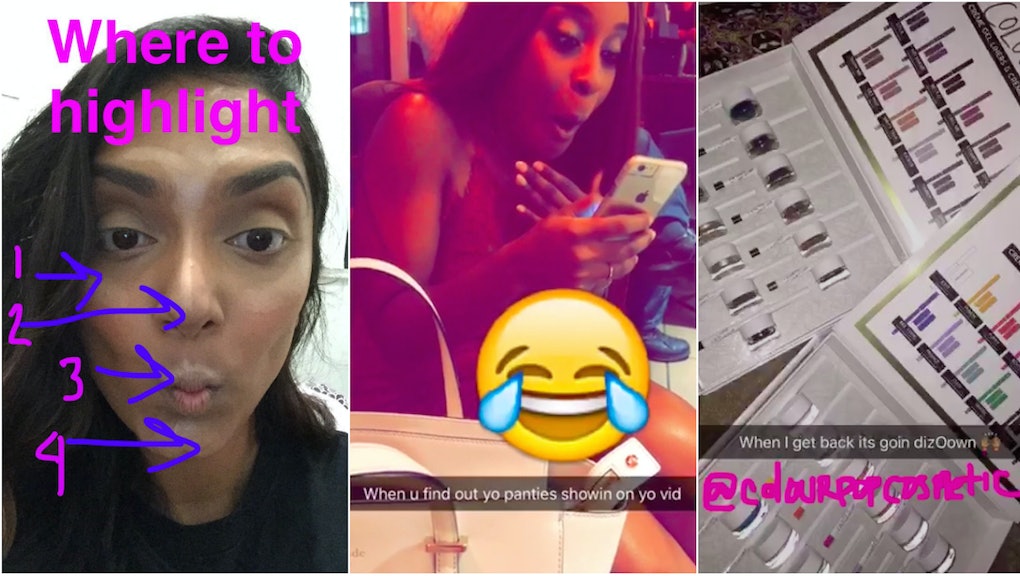 In the world of beauty bloggers, Deepica Mutyala is fairly new to the game. She's been vlogging on YouTube for less than a year, but has already transformed it into a full-time gig. Her amateur video about how to cover up under-eye circles went viral in January, even though the tutorial was admittedly less than perfect, she told Mic. It was only her second video, and she filmed the entire thing on her iPhone, only later realizing she'd been holding the phone incorrectly.

Still, that didn't stop the video from climbing to more than 9 million views, thanks in part to Mutyala's lively persona and practical advice.

"I think it taught me a lot about... the value of authenticity," Mutyala said. Today, she continues sharing makeup tutorials on YouTube, but she says she's found a new avenue where she gets to truly be herself: Snapchat.

Mutyala, like many beauty vloggers, has expanded the list of the typical social media outlets (YouTube, Twitter, Instagram, Pinterest) to include Snapchat, which has seen tremendous growth during the past year. According to the Financial Times, more than 6 billion videos are watched daily on Snapchat this year, compared to Facebook's 8 billion daily views, even though Snapchat is only available on mobile.

Snapchat has evolved past its raunchy reputation into a fun social media outlet that allows for a playful sense of immediate connection between users. As everyone knows, its max-10-second videos disappear after being opened (or 24 hours if they're part of a story), adding a sense of spontaneity and non-calculated authenticity to everything that's shared.

It's that last piece — authenticity — that's particularly appealing to the beauty bloggers who've begun using it to deepen their relationship with their followers.

Beauty bloggers Mic interviewed all pointed to how Snapchat has become their go-to social channel for connecting with their superfans on a more personal level. If Instagram is all about finding the perfect filter, the perfect angle and the perfect lighting, and YouTube is all about the meticulous step-by-step process, Snapchat is no-man's land of celebratory imperfection. The more ridiculous the snap, the better. Bring on the emojis, text,  "stamps" (those cute location-based images) or face-morphing filters.

"People see you on Instagram and think everything's perfect, because obviously you show them what you want them to see," Ellarie, the beauty blogger behind Ellarie's World, told Mic. "You're able to share things you wouldn't be able to share on Instagram."

Snapchat is also a place, notably, where bloggers show themselves without makeup. YouTube beauty tutorials are all about the polished finished product, and it's common for bloggers to start with their makeup already half-done and fast-forward through the process. But those types of how-tos are notably absent from beauty bloggers' Snapchat stories.

Instead, they're snapping intimate, unvarnished parts of their day just like a close friend might, from a monologue about their latest grocery store trip to a random poll asking followers, "What outfit should I wear?" Followers send back their own snaps in response.

(Ellarie, for example, says she frequently switches between private to public settings on Snapchat to limit the amount her followers can flood her with responses. The effect is windows of time when she is "live" on the app and followers know she will respond in real time.)

Those fans are an eager and ever-growing bunch. YouTube has been bursting at the seams with makeup tutorials and haul videos since Michelle Phan took to the platform in 2007. The sheer plethora of beauty videos can be overwhelming, but it's been a space for "influencers" to launch lucrative careers (we're looking at you, Phan and Bethany Mota) based on their skills and the cult of personality.

It may seem like a saturated market these days, but there remain ripe opportunities for new audiences. Mutyala said she was motivated to share her videos after not seeing other Indian women like herself active in the space. Jackie Aina, the blogger behind Makeup Game on Point, told Mic she also saw few makeup tutorials for dark-skinned or black women when she first began posting tutorials.

Aina's YouTube channel has more than 516,000 subscribers, who follow her carefully polished, full-face makeup tutorial videos. Her followers on Snapchat are fewer in number but it's a sizable audience, she said. (Snapchat does't make the number of followers for accounts public.)

And as the number of beauty bloggers seems to only grow, the need for the organic connection with fans that Snapchat delivers is crucial.

Aina said she doesn't plan out her snaps, opting instead to share content organically throughout the day. But she does think as she goes about what her daily "story" will look like to her followers, considering whether it has a beginning, middle and satisfying end.

"So I snap at random, but I don't do random snaps," Aina said. If she gets a package from a company, she'll film herself opening it so her followers experience the surprise along with her. One recent snap story saw Aina goofing around in a clay face mask, her captions poking fun at her own frozen face.

The ultimate goal is to show her followers what she otherwise might leave out from a polished YouTube video. It's the kind of authenticity is at a high premium these days, as the response to Instagram star Essena O'Neill's recent viral self-exposé revealed.

That kind of freedom means a lot less stress about creating a perfect Snap, Ellarie said — for now. She hasn't started creating sponsored Snapchat posts, though she said she has been approached by companies, and some fashion bloggers are already monetizing their snaps.

"I haven't tried it yet but I'm just trying to enjoy it before it turns into another job," she said.

In the meantime, Mutyala said she'll keep using Snapchat since it's the one platform where success comes from simply being "you." So expect her to keep filming herself in front of the mirror applying lipstick, like any other girl — the only difference being she'll fill you in you on the brand she's using.

"It's almost like my own reality show," Mutyala said. "I get to be as raw and real as I want to."