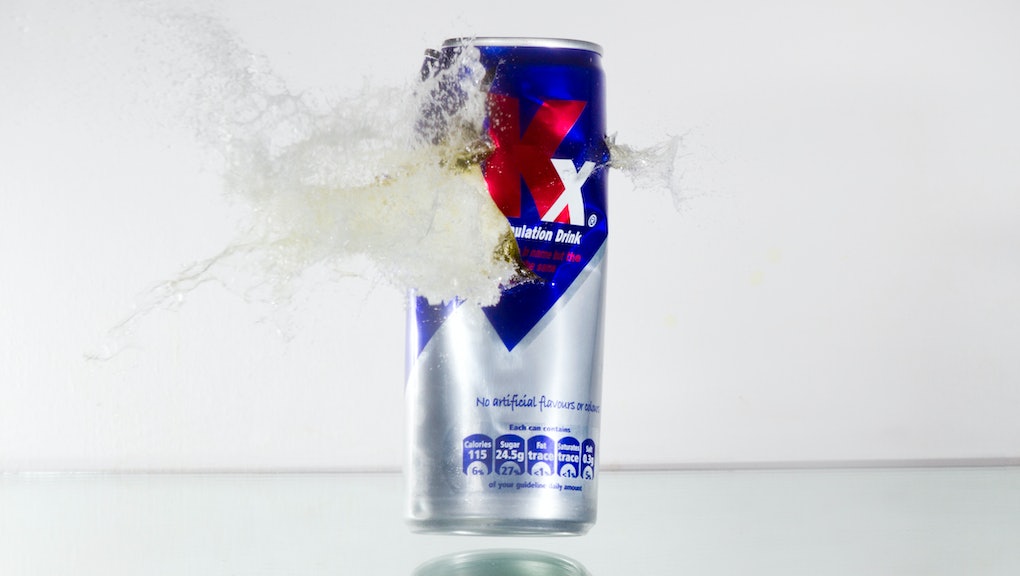 Having Just One Energy Drink Could Put Your Heart at Risk, Study Suggests

A can of Red Bull might give you wings, but it might also give you a host of heart-related health risks.

According to a study published Nov. 8 in the Journal of the American Medical Association, consuming just one energy drink results in a significant increase in blood pressure. Those acute spikes, the study's authors wrote, may put energy drink fans at increased cardiovascular risk — though they'll require further research to make any conclusions.

The participants — all healthy, nonsmoking, medication-free adults — were asked to drink one can of Rockstar Energy Drink and one similar-tasting, caffeine-free placebo drink within five minutes, in random order, on two different days over a span of two weeks. The researchers recorded various cardiovascular data, including heart rate and blood pressure, before and after the participants consumed the drinks.

So Rockstar, Red Bull and Monster probably aren't great for our hearts. But is it OK to consume energy drinks the same way we binge occasionally on bacon, pizza and late night pad thai — that is to say, in moderation?

Nieca Goldberg, a cardiologist and director of the Joan H. Tisch Center for Women's Health at NYU Langone Medical Center, encourages her patients to completely cut the beverages out of their diets.

"I bet a lot of people don't realize how much caffeine they're getting," Goldberg told Mic, noting that a typical energy-boosting beverage can contain three to five times the amount of caffeine found in a standard cup of coffee. "It's a little hard to say if people can do that in moderation. I, of course, advise against it."

In recent years, the Food and Drug Administration has even investigated a slew of deaths purportedly linked to Monster and 5-Hour Energy shots.

"I think people need to be more aware of potential side effects," Goldberg said.

Not all health gurus completely shy away from the drinks. Wellness expert John Rowley, certified personal trainer and author of The Power of Positive Fitness and Climb Your Ladder of Success Without Running Out of Gas, had, in fact, just finished drinking a Monster when Mic reached him by phone.

Rowley said he drinks a Monster one or two times a week. He pointed out some of the benefits of caffeine, such as increased metabolism and body temperature, the latter of which might help burn calories.

A regular gym-goer, Rowley typically uses a blender to mix together Monster, protein powder, the essential fatty acid MCT oil, fiber, ice and blueberries. "I make it into a protein smoothie," he said. "Having all that stuff combined lessens the effect of the caffeine. The fats and protein slow down digestion."

As long as you understand the way your body reacts to caffeine, it's OK to have an energy drink now and then, Rowley advised. Just don't go crazy.

"It's like when doctors say red wine is good for you," he said. "They don't mean a bottle — they mean a glass."

Given the recent findings, some may still choose to go cold turkey. Mic asked Goldberg about a natural energy boost people ought to try instead. Is there a magical, healthy alternative to those syrupy-sweet acid-green and electric-blue concoctions?

"Maybe," she suggested, "they should get enough sleep."