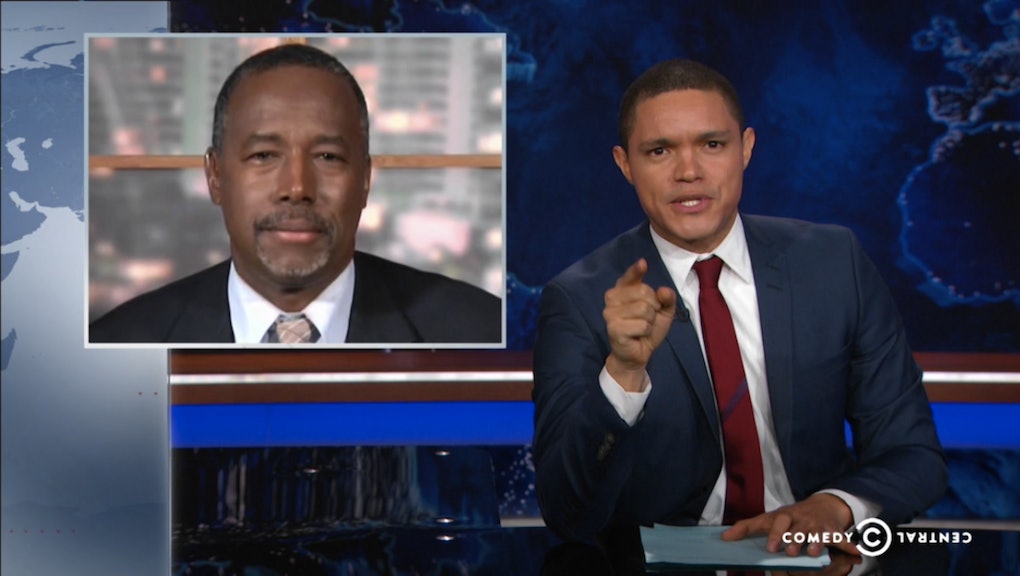 If you ever doubted Trevor Noah's ability to fill the massive vacancy left after Jon Stewart's Daily Show departure, expect to have those doubts erased once and for all.

On Monday night's episode of the Daily Show With Trevor Noah, the 31-year-old host continued Stewart's tradition of taking politicians to task in a way that can make the most self-assured bigwigs want to crawl under a table.

Monday's target? Ben Carson, the GOP presidential candidate who made some questionable claims about the media in a news conference on Friday.

"I do not remember this level of scrutiny for one President Barack Obama when he was running — in fact, I remember just the opposite," Carson said in a news conference on Friday, agitated by what he perceives as the media's poor treatment of him, according to ThinkProgress.

"If you can show me where that's happened with someone else, I will take that statement back," he later added.

For his part, Noah went HAM on the most bizarre of Carson's beef — the media's attempts to debunk the candidate's claim he once stabbed someone.

"That early picture of violence is not recognizable to some who grew up with Carson," one anchor argues in a clip highlighted on the Daily Show With Trevor Noah. "Ten schoolmates and neighbors all said this was not the boy they knew."

"Those claims [of the stabbing] are absolutely true," Carson said, defending his anecdotes of a violent youth, on Fox's the Kelly File.

"Okay, now, let's just take a second," Noah muses. "This is weird for me. Maybe it's me or where I'm from, but this shit is weird. So the media is saying, 'Those rumors about you having a clean record and you being an upstanding member of society are true!' And Ben Carson's, like, 'Bullshit! I'm dangerous! And I tried to kill people! And I'm a bad person! I should be president!'"

Noah categorically discredited Carson's allegations with an aggregate of news clips from 2007 and 2008 about Obama's first presidential campaign; it was a rapid fire of incredulity and skepticism:

Among the quotations the show highlighted, from Obama's rise to the presidency:

"You smoked marijuana, did a little blow, as you put it. Explain that — why did you do it?"

"Do you accept the support of [Nation of Islam's] Louis Farrakhan?"

Then, the most damning question of them all: "Would you vote for a smoker as president?"

The slew of accusations play on, from questioning his patriotism because of his initial refusal to wear an American flag pin to suggesting he is a Muslim, educated in a madrasa.

"Yeah... So, they vetted Obama to the point where they questioned that he was a legitimate, natural born American citizen," Noah concludes. "But at least no one ever accused Obama of not stabbing a guy. He got off easy."