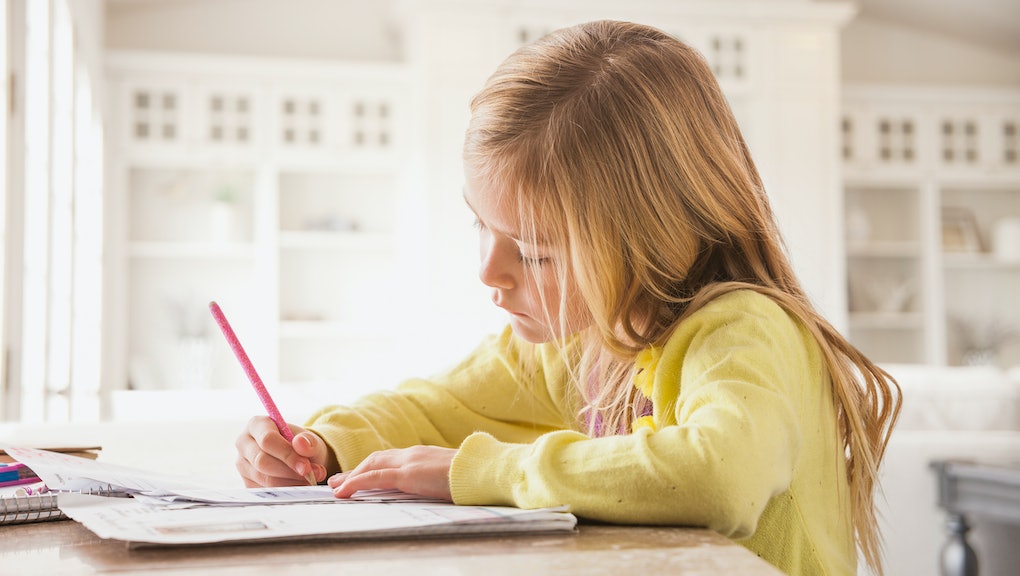 Every so often, a kid makes a statement that one might describe as, oh, I don't know... the darndest thing. Then that quote goes viral, and the Internet's Grinch-like readers' hearts grow a size or two, for approximately just as many minutes.

Such is the case with our latest sassy elementary school queen, fourth grader Maddy Douglas. In a recent homework assignment, Douglas was faced with a riddle involving a group of high schoolers who all go on dates with each other in various friend-cestuous combinations.

So the brave lil' tyke used the multiple choice question as an opportunity to stop being polite and start getting real.

"Frank, Mike, George and Ron each went out on a total of 4 dates with 4 different girls," the question began (ignoring the fact that Frank and George could very well be screwing around with each other on the side, but we'll overlook that for now.)

Rather than do the mental gymnastics required to figure out WTF the question is even asking in the first place, Douglas simply read it and responded, "Nope!"

"I can't answer this problem," she wrote in the margins, "because my mom says accoording [sic] to girl code you shouldn't date a friends x boyfriend."

So we know where Douglas stands: chicks before dicks, lasses before asses, Venus before penis, besties before testes, etc.

Maddy's mom, Jenn Douglas, told the Huffington Post that she felt the question not only broke "girl code," but was also inappropriate for a fourth grade homework assignment.

"I consider myself to be a completely open-minded type person and as a single mom, try to teach my children about equality and about different types of people they will encounter, but my first reaction was it was not an appropriate question for a fourth grader or really any grade," she said.

Ignoring the question of whether or not the question is "appropriate," though, there's something bigger worth discussing here: The fact that girl code is not a hard-and-fast rule in and of itself, as plenty of people have successfully dated friends' exes without heartbreak.

What if Frank dated Rose but then Rose realized she was actually in love with George? And then George reciprocated the feeling, and Frank didn't really care anyway because he was more into George's girlfriend Louise anyway, so they all did a mutually amicable switcheroo? (This is all very plausible in the fictional world that these test-writers have created.)

No matter where you stand on the "dating a friend's ex" discussion, though, we can't exactly blame Maddy for being all, "Whatever, I'm Audi" to that question. It was convoluted AF.