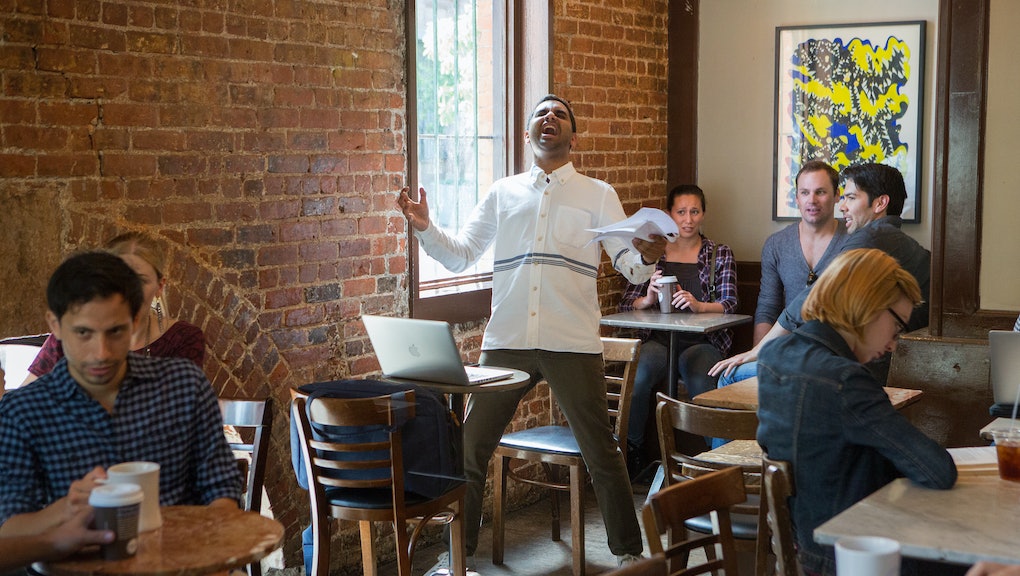 Aziz Ansari's Netflix Series 'Master of None' Is Groundbreaking, Funny — and Artless

Aziz Ansari's new Netflix series Master of None is an easy series to root for. From a social perspective, the show is an exciting display of what happens when a story is told and populated by people of color. As an auteurist statement from creator/writer/director/star Ansari, it represents a complete and unique vision. The series is semi-autobiographical: Ansari plays Dev, an Indian-American actor struggling to break out and find love in New York City. Each episode tells a story about a particular theme, like the first episode, "Plan B," about the idea of having a child, or "Indians on TV," about representation in the entertainment industry.

On paper, these stories are great. Writing an episode that takes on how racist Hollywood can be from a direct, personal perspective is the kind of groundbreaking TV needed today. In practice, however, Master of None just doesn't amount to a well-made piece of entertainment. It's pretty artless.

A lot of the failure lies on Ansari's shoulders, though it's a noble failure. He co-created the series with his former Parks and Recreation producer Alan Yang, writing all but one episode and directing two. It's fair to say that he's the primary architect of the show's tone and voice, which is where Master of None falls apart.

Perplexingly, almost no one on the series can deliver so much as a line convincingly. For amateur actors, like Ansari's parents Shoukath and Fatima (playing Dev's parents) or Busta Rhymes (who has a spectacular cameo in "Indians on TV"), this is understandable. It's less acceptable from Ansari himself, or from collaborator Eric Wareheim (of the comedy troupe Tim and Eric). They've both been on television shows that ran for years. Why do they struggle so mightily with the fairly simple task of delivering lines convincingly?

It's possible Ansari stilted his own delivery to match that of the non-professional actors and give the show an authentic feel. That didn't work, though, because the ensemble doesn't sound genuine at all. It sounds like a group of people reading off of cue cards. Plus, as Dev's love interest Rachel, Noël Wells gives a dazzling, charming performance. Her standing out as an actress actually harms the show, because everyone else seems so much worse in comparison.

The writing is also a bit of a mixed bag. Some of the jokes feel more like the actors are working out material than actually talking, like the conversation about protection in sex between two women from "Plan B." Dev's lesbian friend Denise (Lena Waithe) says something about dental dams and plastic wrap that's just not funny — the inkling of a joke that isn't formed yet.

Other works have used this style to great effect — like the 2014 film Obvious Child, which features a pair of friends who are stand-up comedians Donna and Joey (Jenny Slate and Gabe Liedman). In Obvious Child, however, Slate and Liedman's conversation feels authentic. They riff around Donna's apartment about her upcoming abortion, and not every joke lands. But it's easy to tell this is how they work their material out as characters. In Master of None, it's just spitting out half-formed punchlines, and these characters aren't stand-up comics.

Even the good jokes (and there are quite a few!) are hampered by a story structure that drags. Episodes are 30 minutes long, but the stories within them are enough to cover about five to 10. "Parents," the series' second episode, suffers from this the worst; a good concept (how first-generation Americans Dev and Brian, played by Kelvin Yu, relate to their Indian and Asian parents) is wasted on an episode that spends more time on talking than showing. After a dinner scene with the titular parents, the next few minutes of the episode just depict Dev and Brian talking about said dinner. It feels like filler in an episode that could just stand to be shorter instead.

The show's closest parallel on modern TV is Louie, Louis C.K.'s FX series that also relies on episodic structure to tell individual stories. Vogue even called Master of None "a millennial Louie." The style itself is not the problem; in fact, done properly, it can be quite compelling. Master of None's problems lie in the execution.

None of these errors are fatal. Master of None is still enjoyable, if much less impressive than it could have been. It just needed a bit more time in the production oven before it was delivered to audiences.

Frustratingly, the reviews for Master of None have been nothing but gushing. The series has a 100% approval rating on Rotten Tomatoes, with no less than the New York Times calling it "five-star" television. The excitement here seems to be that these fresh and groundbreaking ideas — about race, about life in New York, about what television can even be — exist at all.

All else aside, that is certainly true. Master of None excites for what it will inspire in other creators, and even in Ansari. His candor about the series and casting nonwhite actors has been refreshing. Television needs more of that, and more shows that will actually engage with race. If Master of None leads to more of those kinds of shows, it will have served a great purpose.

But selling the series as anything more than just decent television feels so disingenuous. It hypes Master of None up to such a high level that viewers watching the series on recommendation may find the show lacking. Make no mistake, though: Ansari's show deserves credit for being groundbreaking and exciting. It is a marvelous first step toward something great. Perhaps that will come in the show's inevitable second season.