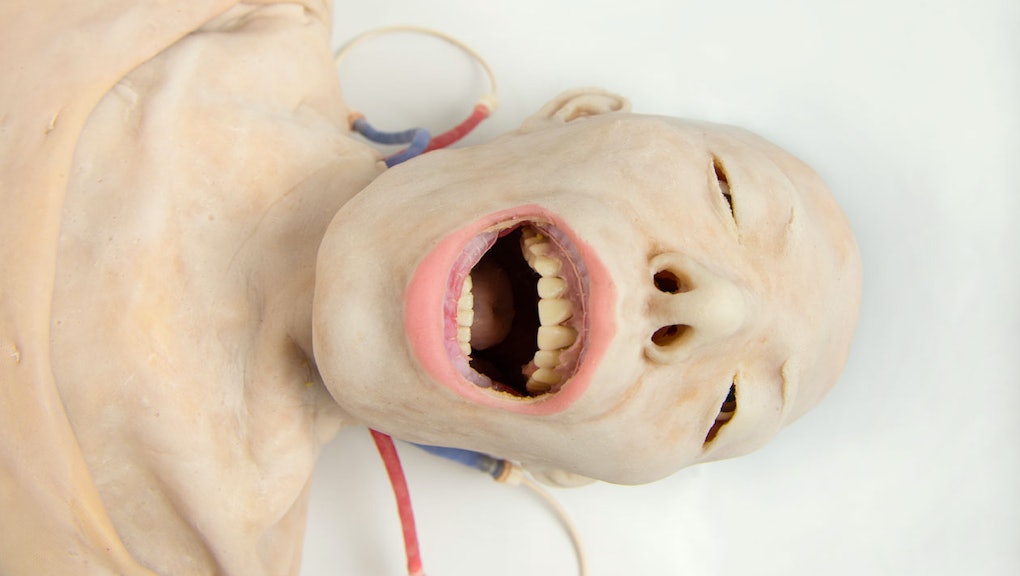 The term "synthetic cadaver" is a bit misleading: Even though they replace cadavers in some cases, they're meant to replicate living tissue, SynDaver's president and chief technology officer, Chris Sakezles, told Mic. Made of water and synthetic fiber, they move and respond like live humans.

Creepy? Scary? Absolutely. But these bodies are helping doctors, researchers and students study the human body without having to deal with actual human remains.

People can practice medicine on full bodies, body parts (Want a fake uterus? Buy one here.) and pieces (called wearable simulators) that can be worn on a living person to perform practice surgeries.

The bodies and body parts are reusable. You can operate on a SynDaver cadaver just like you would operate on a real person: cutting, sewing, etc. When you're finished, you can buy new parts to do it all over again.

Sakezles compared SynDaver bodies to cars. If you crash your car, you don't just go out and buy a new car; you buy a new piece, like a bumper. Similarly, you can purchase any piece of a SynDaver body you need. Did you perform surgery on the body's kidney? Just buy a new kidney!

SynDaver won big on Shark Tank — then lost the funding.

Look familiar? You may have seen SynDaver's synthetic cadavers on TV; Sakezles appeared on the ABC reality show Shark Tank in May. The bodies have also been featured on the Discovery Channel's MythBusters, CSI  and Grey's Anatomy.

On Shark Tank, Sakezles made a deal with multimillionaire Robert Herjavec, who agreed to pay Sakezles $3 million for a 25% stake in SynDaver Labs. SynDaver Labs never got that money, though.

"We made a deal on the show, but there's a lot of stuff that goes on afterward," Sakezles told Mic. "At the end of the day the deal was going to be me being replaced." Sakezles wasn't prepared to step down, so the deal never went through. "I think the gist of their thoughts on me was that I was just an engineer and not fit to run the business," Sakezles said. "Obviously I don't agree with that."

Thankfully for SynDaver Labs, the company got invaluable recognition just by appearing on the show. "You can't even buy that kind of exposure," Sakezles said.

Synthetic cadavers don't have a huge market, since they're not sold to individuals, but Sakezles says that SynDaver has sold "a few hundred" so far.

Will SynDaver ever replace real bodies?

"I think that my students benefit more from using human cadavers," Dr. Offiong Aqua, an associate professor of occupational therapy and physical therapy at New York University, told Mic. Aqua, who was the director of a cadaver lab around 20 years ago, now teaches anatomy, which is lovingly referred to as "cadaver class."

"We use human cadavers," he said. "We've had opportunities to move away from them, but I've never done that." Why not? Because there's no substitute for the real thing.

"You want the student to remember what they saw on the cadaver when they deal with patients later on," Aqua said. Using a synthetic cadaver doesn't create the same experience.

Aqua's not the only medical professional who feels this way.

"While synthetic cadavers or digital models can be useful for review, they are inadequate for learning anatomy," Paulette Bernd, professor of pathology and cell biology at Columbia University's College of Physicians and Surgeons, told the Huffington Post.

All cadavers used for research and educational purposes have been donated. It is illegal to buy or sell cadavers in the U.S., and the students know the names of each body their working with, Aqua said. Aqua has noticed that a disproportionate number of veterans donate their bodies to science.

Something as complicated and high-tech as a synthetic cadaver doesn't come cheap. For example, a full SynDaver body costs around $40,000; an esophagus costs between $100 and $125 and a pancreas costs between $150 and $325. Meanwhile, real cadavers are free; you just have to pay for their transportation, if necessary.

SynDaver may not be able to fully replace the need for real cadavers in medical research and education, but the fake cadavers are useful in some situations.

This is the future of a new industry.

Outside of hospitals and labs, synthetic cadavers are starting to have applications in ballistics and crash testing.

"Ever since we started doing MythBusters, whenever we wanted to assess the kind of damage the human body would take under the conditions we were putting it under, we've had to use either dead pigs or build rigs that assess the damage body part by body part ... until now," MythBusters co-host Adam Savage says in a 2012 episode.

Savage and co-host Jamie Hyneman used a SynDaver body to see if it was safer to fall into a shallow pool directly or onto a mattress floating in the pool. After each experimental fall, the team examined the SynDaver body just as they would examine a real body, finding that the SynDaver was severely injured after it fell onto the mattress in the pool. Specifically, they were able to determine that the body suffered spinal cord injuries and dislocated joints. You get a lot more specific information from a synthetic cadaver than from a crash test dummy.

As SynDaver continues to grow, the lab will create more types of bodies and body parts. Right now SynDaver makes some synthetic infants, but the company is planning to develop more bodies representative of different ages.

"The body as a product is going through continual evolution," Sakezles told Mic. "We're constantly improving it." Sakezles and his team are working on creating synthetic cadavers that represent newborns, prematurely born babies, adolescents and more.