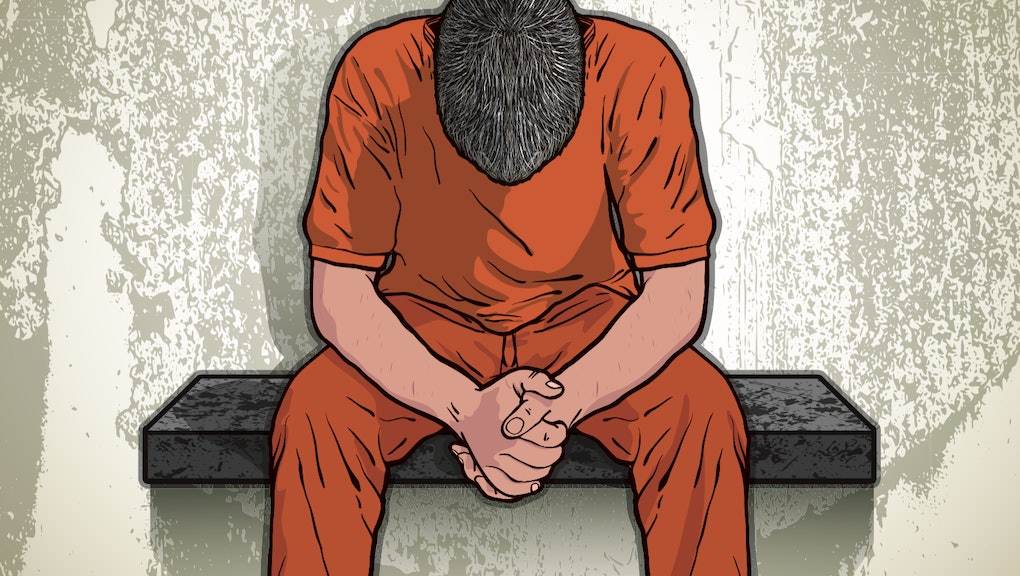 Horror stories about debt are usually related to student loans or mortgages — investments that haven't panned out as expected, or have become impossible to pay off in a world of increasing economic insecurity.

But David Mahoney's $21,000 worth of debt isn't the result of taking out loans. It's a punishment.

Mahoney is featured in a groundbreaking report by the Ohio branch of the American Civil Liberties Union detailing what's known as "pay-to-stay" jail debt. Pay-to-stay fees are fines incurred by entering and staying in jail, and come in the form of a booking fee, a daily charge or both. Most of Ohio's full-service jails impose the fees on the people they incarcerate, and it can accumulate quickly: A 180-day sentence in one jail in the state can result in a fine of nearly $12,000, according to the ACLU.

Mahoney, who told the BBC that he has struggled with severe alcohol and drug addiction since his teenage years, has amassed an insurmountable mountain of pay-to-stay debt after numerous arrests over the course of 15 years of run-ins with the law. In addition to his $21,000 jail debt, he also owes close to $10,000 in medical bills and student loans.

Mahoney, who is now living in a recovery center and has been sober for over a year, told the BBC he wants to return to school to complete an associate's degree. But in addition to the systematic discrimination he faces in the job and housing markets as a result of having a criminal record, his ruined credit from years of unpaid debt means he can't obtain a car or a credit card.

Ohio is far from the only state that punishes people by demanding fees long after they serve their time in the criminal justice system. Pay-to-stay jail fees are legal in nearly every state in the nation, and there's about $10 billion worth of documented criminal justice debt in the United States, according to the BBC.

How it works: The ACLU report finds that Ohioans are being charged as much as $66 a day to stay in jail, and that former inmates' debt ranges from hundreds of dollars all the way up to about $35,000.

One of the most remarkable issues highlighted by the BBC is that many of the programs in Ohio and other states barely break even or operate at a loss, given the high cost of collecting payments and the inability of many former inmates to pay. In some situations, the collections agencies, not the jails, take a vast majority of the money that is successfully recouped. One jail administrator in Ohio told the BBC that his facility had collects just 3% of the millions of dollars of debt they billed for.

The inefficiency of the collection of pay-to-stay jail fees is a crucial detail, and throws the purported mission of these programs into question. If the purpose of these fees is to recover money for taxpayers, then spending money on staff, record keeping and collections agencies to strong-arm people into payments should be relieving taxpayers. But with huge rates of inefficiency, it's clear that they're routinely either having no effect, or burdening taxpayers even more. All the while, debtors lose money that could otherwise be used to build a more financially stable life (assuming they can pay at all) which would in turn make it less likely they have to use public assistance to keep their head above water.

Then there's the question of whether somebody who has stayed in jail should have to pay for their time there at all. Jails and prisons are public institutions funded through taxpayer dollars — money that comes from the taxable income of people who have never been to prison and people who have been to prison alike. As far as the argument that someone who breaks the law should have to pay something extra, a jail sentence serves that purpose — that's why prison time is referred to as "paying your debt to society." And a criminal record is an additional onus that hurts a person's employment and housing prospects for the rest of their life.

Even if you think people should pay a price beyond going to jail, there should at least be some consistency in the way we fine people accused of wrongdoing. Wall Street banks pay piddling fines, usually little more than a dent in their astronomical profits, when engaged in the kind of unscrupulous practices that place the entire economy at risk. Their executives, of course, never go to prison. They argue for lower fines based on the argument that they need to maintain functionality even if they commit wrongdoing — should that argument not apply to someone who spent time in jail for breaking and entering? If we are to treat members of society equally, there should be a very low cap on pay-to-stay fees in order to make sure formerly incarcerated people can live productive lives when they get out.

It's important to reflect on the core purpose of the criminal justice system. Is it to make the perpetrator of a crime suffer, or is it to reform them? Burying people in debt seems to do one much better than the other.