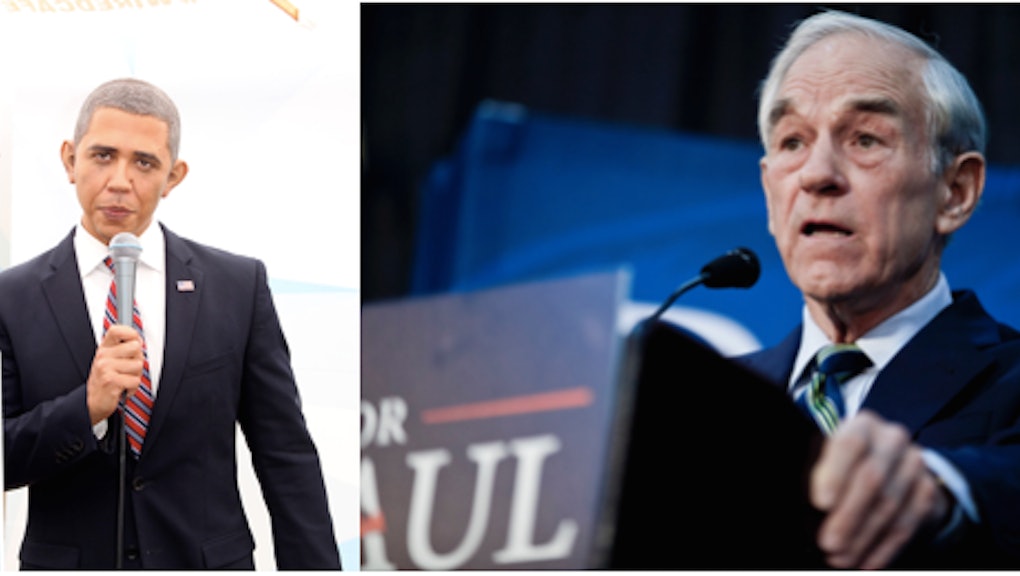 Remember That Time in 2011 When Fox Business Hosted a "Debate" Between Obama and Ron Paul?

Republicans are gearing up for the fourth presidential debate of the campaign season. The event, which will be held at the Milwaukee Theatre in Milwaukee, is being co-sponsored by the Wall Street Journal and Fox Business Network.

As its first presidential debate, the night is a milestone for Fox Business, which was launched as a rival for CNBC in 2007.

The upstart financial news network is not completely green to the rigors of presidential debating, however.

Believe it or not, in 2011, journalist John Stossel moderated a bizarre head-to-head debate between then-Texas Representative and Republican presidential candidate Ron Paul and an actor portraying President Barack Obama. No, really.

"I actually did a lot of appearances on the Fox News network a few years back," Reggie Brown, likely the world's foremost Barack Obama impersonator, told Mic. "They just wanted me to reiterate what he said in his speeches."

Brown said that he made fewer appearances on the business network, but that in every case he was always adamant about the lines he would not cross.

"I am always a little bit leery when Fox News reaches out because, you know, they're Fox News, and I know what they feel about the president and it's the direct opposite of how I feel about the president," he said. "When I got there, I went over the script and said, 'What's this about? I'm not going to say anything that you guys made up to perpetuate the false information that you guys put out.'"

For Brown, it all began when his brother told him in 2001 that he was a dead ringer for a guy who played basketball at Chicago's East Bank Club — then-Illinois state senator Obama. Brown didn't give it much thought, however, until Obama was elected to the United States Senate in 2005. "Everyone would stop me on the street and ask me for a picture thinking I was Senator Obama," Brown said. The impersonator has since taken his show around the world, according to his site.

While Brown makes a fine Obama at corporations and parties, his use by Fox — ostensibly a news vehicle —  as a comedic prop is not the first time the Fox empire has overtly stepped into partisan politics. During the 2012 campaign, Fox News aired a four-minute anti-Obama ad on the morning show Fox and Friends, which Media Matters estimated to have been the equivalent of $96,000 in free airtime for the Republican Party.

Brown, however, said he doesn't buy any of it this election season.

"I'm leaning towards Hillary and Bernie at the moment," he said. "I would definitely lean toward people who are more in the interests of America."