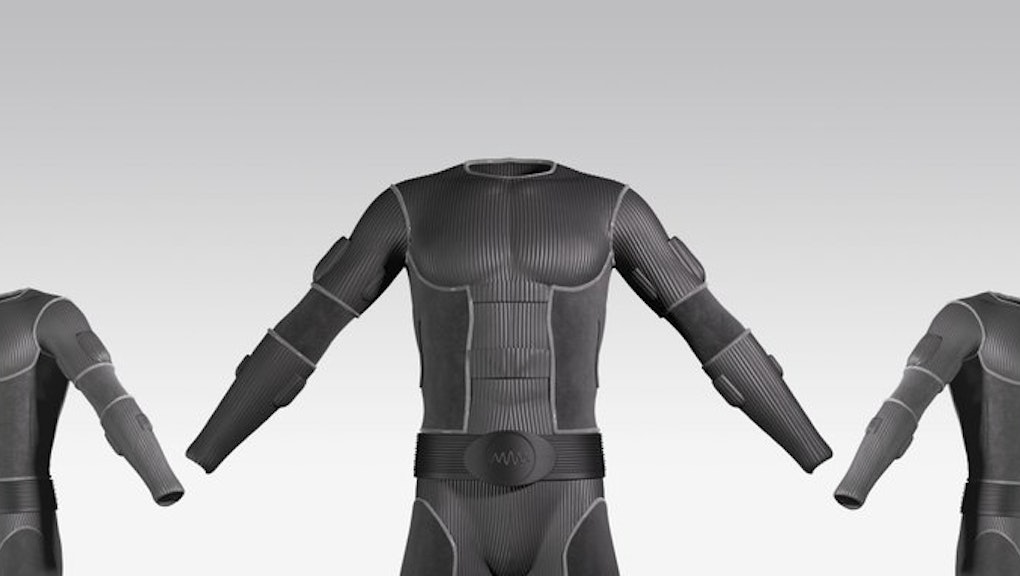 Keeping intimacy alive in a long-distance relationship isn't as hard as it used to be. Thanks to technology, geographically challenged partners can talk, text and videochat at all hours of the day and night. Options abound, even, for remotely controlling each other's sex toys.

The futuristic suit was developed by Tesla Studios (no relation to Tesla Motors), a hardware and software development firm headquartered in Scotland. Marozau, whose background is in computer programming, said he'd always wanted to create a virtual reality suit — at least, ever since watching The Lawnmower Man as a child.

"It was about integrating virtual reality for a fully immersive experience," he said of the Pierce Brosnan cult classic. "At the time, it was mind-blowing."

Three years after Marozau founded Tesla Studios with friend Serge Khurs, the firm has produced the first Tesla Suit. Using electro-muscle stimulation technology, the suit is equipped with nodes that replicate tactile sensations through small electric pulses — similar to the way in which the human brain communicates with our various body parts.

The Tesla Suit's primary application, for now, is gaming. Pair it with a virtual reality headset like Oculus Rift, and you're not just seeing the world of your game — you're also feeling its climate and physically interacting with its people. Marozau also foresees it being used in education and, once it earns the proper certifications, health care.

Marozau hopes it can be used to help people in physical therapy, including stroke survivors in recovery.

"Doctors could choose what part of the body, what electrodes, what frequency to apply," Marozau said. "You could create patterns and play them repeatedly."

But back to those long-distance relationships. If you and your partner each had a suit, you could simulate physical interaction with each other, no matter the distance. You could feel a warm hug or an arm draped around your shoulder, or even simulate cuddling.

The first of those was the phenomenon experienced by Sarah Cox, a BBC reporter who sampled the Tesla Suit last month. While Cox wore the Tesla Suit and a virtual reality headset, a nearby man simulated a hugging motion. Cox was able to see a simulated image of the man's hugging motion, and although they weren't touching, she felt his hug all the same.

"I could feel it all down my back, and on my shoulders, and on my stomach," she said in a video posted to YouTube, "and it's just really exciting."

But feeling a hug from a thousand miles away isn't all the Tesla Suit lets long-distance daters do. Pairing the suits with virtual reality headsets offers stunning possibilities. You and your partner could see real-time footage of each other, or even transport yourselves to some far-off, magical locale.

The technology is also exciting to those in sex-related industries, such as camming.

Technology that enables remote sex, also known as teledildonics, "has given people a virtual hand to reach out and touch someone in a very honest and real way," Nikki Night, webcam performer and head performer coach at Cam4.com, told Mic.

"I think that would fill a very big need in the industry," she said.

Tesla Studios has only produced one Tesla Suit, though Marozau promises more are to come. The team plans to launch a Kickstarter campaign, and eventually hopes to sell the suit on the mass market. They're aiming to sell it at under 1,000 pounds, or roughly $1,500. It's certainly more expensive than a remote-controlled sex toy, but it's not exorbitant enough to be entirely out of reach.