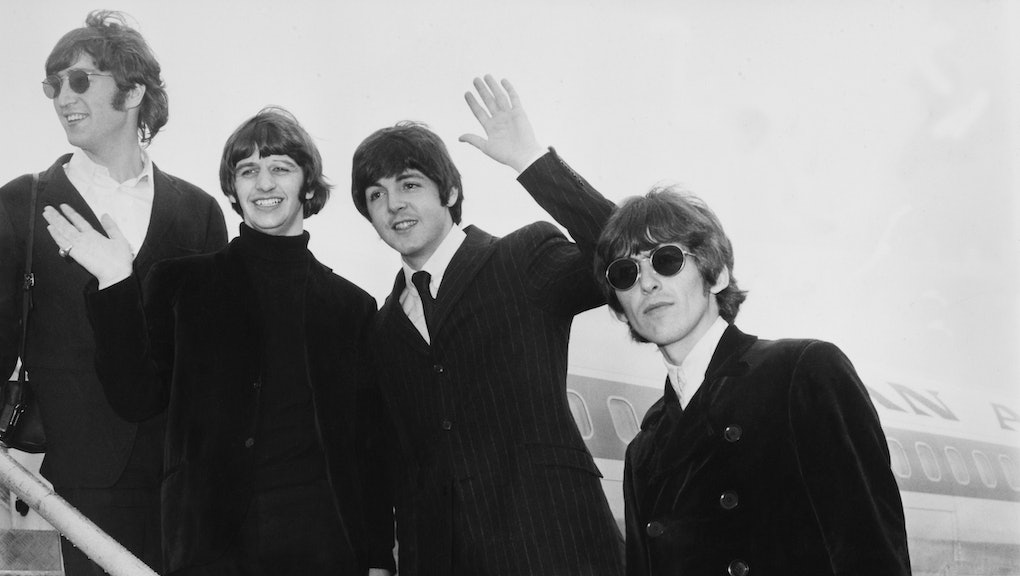 When Brian Wilson of the Beach Boys heard the Beatles' Rubber Soul for the first time, he knew something in pop had changed.

"I listened to Rubber Soul, and I said, 'How could they possibly make an album where the songs all sound like they come from the same place?'" Wilson said in the 2008 documentary The Beach Boys and the Satan. "I couldn't deal with it. It blew my mind. And I said, 'Damn it, I've got to do that. I've got to try that with the boys.'"

He saw it as the first pop album without any filler, and it likely was. It hit stores at a time when the industry was far more focused on singles, and records were largely viewed as methods to house them. It inspired Wilson to write Pet Sounds, a highly symphonic masterpiece, which in turn inspired the Beatles' Sgt. Pepper's the Lonely Hearts Club Band. It was arguably the greatest musical conversation that has ever existed. These three albums — Rubber Soul, Pet Sounds and Sgt. Pepper's the Lonely Hearts Club Band — all sit in the top of Rolling Stone's "500 Greatest Albums" of all time, Nos. 5, 2 and 1, respectively.

Beyond just inspiring Wilson, Rubber Soul challenged all of pop music to step up and start seeing albums as artistic wholes and potentially transformational moments for listeners. It was 50 years ago Wednesday the Beatles put the finishing touches on that lyrical and experimental album, changing pop history forever.

The Beatles needed soul. Rubber Soul marked a sharp departure from the Beatles' earlier pop-forward singles. It was a change they needed to make. Their influence was beginning to pale in the face more cathartic, confrontational singles such as the Rolling Stones' "(I Can't Get No) Satisfaction" and Bob Dylan's nuanced "Like a Rolling Stone."

McCartney admitted as much in an interview recorded in the Beatles' Anthology. "The early material was directly relating to our fans, saying, 'Please buy this record,' but now we'd come to a point where we thought, 'We've done that," he said. "Now we can branch out into songs that are more surreal, a little more entertaining.' And other people were starting to arrive on the scene who were influential. Dylan was influencing us quite heavily at that point."

The change can be seen most distinctly in John Lennon, who wrote some of the most iconic songs of his career. "In My Life" dealt with his childhood memories. "Nowhere Man" let him channel his feelings of insecurity and his dissatisfaction with the directions his personal and professional lives were into a removed third person, a technique the Beatles would use frequently going forward. The last line "Isn't he a bit like you and me?" hangs in the air in a telling way.

The relationships between men and women on the album are far more nuanced and complex than the Beatles' previous paper-thin sketches. The album is also their first to speak about love as a transformational, mystical force — something that would later become an indispensable portion of their legacy with "All You Need Is Love."

"It sort of dawned on me that love was the answer, when I was younger, on the Rubber Soul album," Lennon once said, according to the Anthology. "My first expression of it was a song called 'The Word.' The word is 'love'. 'In the good and the bad books that I have read,' whatever, wherever, the word is 'love'. It seems like the underlying theme to the universe. Everything that was worthwhile got down to this love, love, love thing. And it is the struggle to love, be loved and express that that's fantastic."

The album also shows the group beginning to experiment musically as well. "Norwegian Wood (This Bird Has Flown)" was one of the first songs to feature Indian sitar. It offered the first hint of the Eastern mysticism that the Beatles would begin to explore and advocate heavily for after studying with the Maharishi Mahesh Yogi in 1967, which would tint much of the spiritual explorations of the '60s counterculture. The controversial critic Albert Goldman interpreted the whole album as a sign the Beatles were moving their career and all of music onto a higher plane and "beginning to erect that glittering edifice, the '60s."

It was "the pot album," according to Lennon; it was Harrison's "favorite album," the one where they began "hearing sounds that we weren't able to hear before." The album redefined all of the musical trials and tribulations the Beatles had been through in their preceding Beatlemania years. It served as the catalyst to help them become something far more than a cute mopheaded boy band in the annals of music history.

Despite being recorded at a haphazard pace, it proved how resonant albums could be if bands approached them as being more than smashed-together collections of singles and filler. It could be a whole artistic work, from songs to cover to album title — the Beatles added their personal creative touch to every aspect.

Today, the pop industry is still very singles dominated. However, every artist who has taken their time to experiment and craft an innovative, holistic expression — from Beyoncé to Kendrick Lamar — has a debt to pay to Rubber Soul. Fifty years later it endures, still equally good for a quiet introspective listen or harmonizing along with while driving one's car.