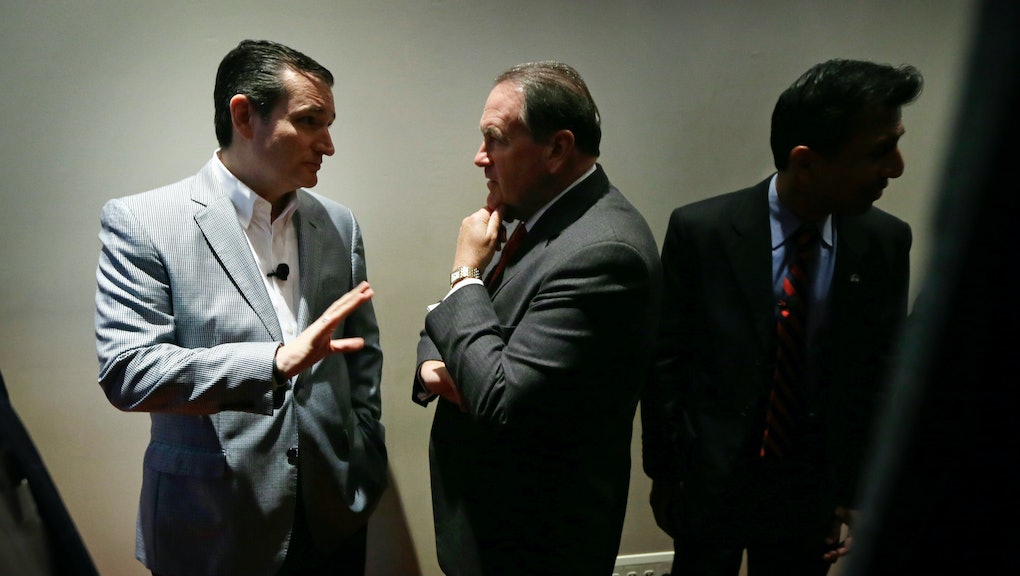 On Friday, three Republican presidential candidates — Louisiana Gov. Bobby Jindal, Texas Sen. Ted Cruz and former Arkansas Gov. Mike Huckabee — attended an event in Des Moines, Iowa, hosted by a controversial Colorado pastor who has frequently advocated against gay people, including that the government should put them to death.

The event, dubbed the National Religious Liberties Conference, was hosted by pastor Kevin Swanson, who delivered a fiery speech in which he said Biblical law calls for "homosexuals" to be executed.

"Yes, Leviticus 20:13 calls for the death penalty for homosexuals," he said. Swanson said he was "willing to go to jail for standing on the truth of the word of God."

Swanson then invited Jindal, Cruz and Huckabee on stage for a Q&A session with the 2016 presidential candidates.

Before Swanson began interviewing Cruz, Cruz joked, "You're not going to ask about fantasy football, are you?" Instead, Swanson asked Cruz how important he thinks it is for a United States president to fear God.

"Any president who doesn't begin every day on his knees isn't fit to be commander-in-chief of this country," Cruz responded.

When the Supreme Court made same-sex marriage the law of the land in June, Cruz urged states to ignore the legislation in an interview with NPR. "On a great many issues, others have largely acquiesced, even if they were not parties to the case," Cruz said of the same-sex marriage law during the interview. "But there's no legal obligation to acquiesce to anything other than a court judgement."

When asked on CNN Thursday before the rally whether or not he felt it was appropriate to attend Swanson's conference given what many have called the pastor's extreme anti-gay beliefs, Cruz said he "doesn't know what this gentleman has said and what he hasn't said."

Jindal and Huckabee took the debate stage at 7 p.m. Eastern on Tuesday for the undercard portion of the fourth Republican primary debate, hosted by Fox Business Network and the Wall Street Journal. Cruz was expected to participate in the 9 p.m. Eastern main event among the other top-polling candidates.