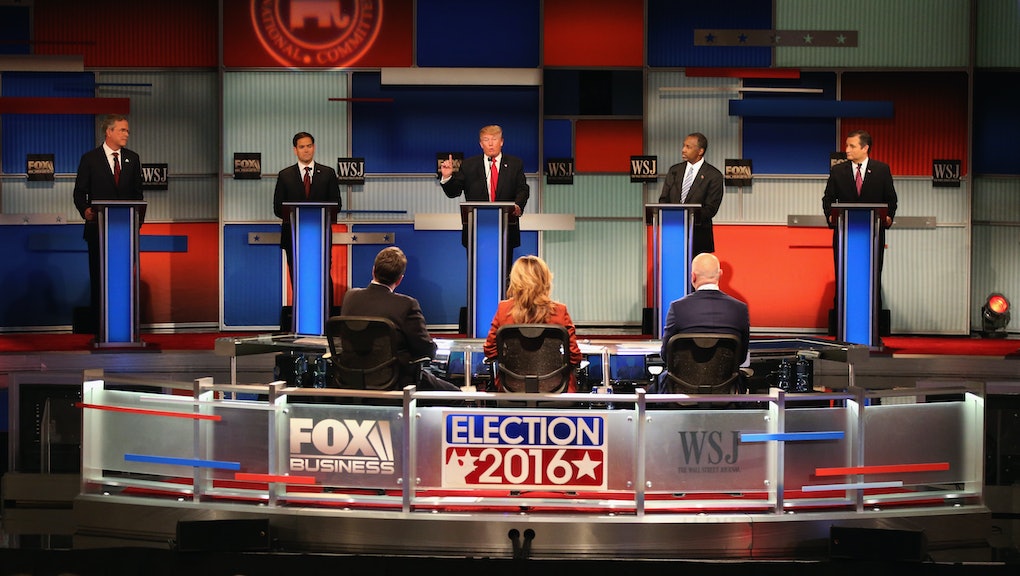 The Fourth Republican Debate Was Barely a Debate at All

On Oct. 14, 1912, former President Theodore Roosevelt gave a barn-burning 90-minute speech at the Milwaukee Theatre after a would-be assassin shot him in the chest. One hundred and three years later, Roosevelt's famous speech remains the only interesting Republican campaign event to have occurred on that stage.

To call Tuesday night's debate a staid affair would be an understatement. Between moderators fearful of emulating their fallen peers at CNBC and candidates weary from the three-hour slugfests that have dominated the campaign thus far, the debate co-sponsored by Fox Business Network and the Wall Street Journal encouraged all involved to bring their B-game. At least for now, the status quo of the most bewildering campaign in memory remains dysfunctionally intact.

Hosted by Fox Business Network's Maria Bartiromo and Neil Cavuto and the Wall Street Journal's Gerard Baker, there were few "moments" in the vein that political watchers have come to expect, the logical consequence of the backlash to the free-for-all that took place in Boulder, Colorado, two weeks ago. That debate triggered a near-mutiny by the current slate of Republican candidates, who decried unfair speaking times, aggressive questions from moderators and criteria for inclusion that rewarded candidates with no chance of winning the nomination.

That said, there were still moments of consequence. Sens. Ted Cruz and Marco Rubio performed solidly. Former Florida Gov. Jeb Bush attempted with mixed success to salvage a candidacy on the brink of destruction. Donald Trump insulted, offended and preened in the manner to which America has become accustomed.

But with more than a month before the next primary debate and little immediate consensus on Milwaukee's winners and losers, there's not much indication that the field's status quo has been disrupted in any meaningful way.

Moments of substance: The assembled candidates, winnowed to a comparatively sparse group of eight front-runners in a field of 15 aspiring nominees, largely battled along familiar Republican fault lines on issues like immigration, military spending, entitlement reform and financial regulation, with most of the candidates choosing to side with philosophical principle over political pragmatism.

The debate marked a no-turning-back moment for candidates to choose a side on immigration, with Trump loudly and predictably touting his proposal to deport 12 million undocumented immigrants and construct an enormous wall along the Mexican border to keep them out. "We are a country of laws," Trump said. "We need borders, we will have a wall, the wall will be built, the wall will be successful and if you think walls don't work, all you have to do is ask Israel. The wall will work, properly done. Believe me."

Trump's familiar plan, long derided as unfeasible by opponents and experts alike, invited a scoff from Ohio Gov. John Kasich, an aggressive debater with a tendency to champ at the bit when moderators ignore him for too long. "For the 11 million people, come on, folks, we all know we can't pick them up and ship them across the border," Kasich said. "It's a silly argument. It's not an adult argument."

Bush jumped in (at Trump's invitation) to state Trump's mass deportation proposal runs contrary to American values, and warned that anti-immigrant invective was a surefire way to arm Hillary Clinton's candidacy. "They're doing high-fives in the Clinton campaign right now when they hear this," Bush said, a suggestion that was immediately confirmed by a member of Clinton's digital team. "That's the problem with this. We have to win the presidency, and the way you win the presidency is to have practical plans."

The debate also ignited a relatively fiery ideological tussle over the size of the U.S. military and the nation's role as global peacemaker, with freshman senators Cruz and Rubio citing the global war on terror as vital to American economic and security interest, and Kentucky Sen. Rand Paul, who chafes at the word "isolationist" but basically is one, decrying increased military spending as un-conservative.

"I know Rand is a committed isolationist," said Rubio, to loud applause and hoots from the debate audience. "I'm not. I know that the world is a safer and better place when America is the strongest military power in the world."

"Yeah, but, Marco! Marco! How is it conservative to add a trillion-dollar expenditure for the federal government that you're not paying for?" Paul countered. "You cannot be a conservative if you're going to keep promoting new programs that you're not going to pay for. I want a strong national defense, but I don't want us to be bankrupt."

Cruz, who may have gained a strategic victory by letting Rubio out to dry, instead joined him in piling on Paul. "You think defending this nation is expensive?" Cruz asked rhetorically. "Try not defending it. That's a lot more expensive."

A debate without moderators: As predicted, the Boulder bloodbath — the poor orchestration of which was largely blamed on the debate's moderators, CNBC hosts Carl Quintanilla, Becky Quick and John Harwood — was enough of a shot across the bow to keep Bartiromo, Cavuto and Baker clear of aggressive lines of questioning on candidates' perceived inconsistencies or personal histories. The trio seemed more interested in cultivating an atmosphere of bonhomie with the debaters than interrogating them.

Considering that Fox Business Network took to running an advertisement mocking CNBC's inability to ask "the real questions" in Boulder, the debate felt unusually convivial. A far cry from Megyn Kelly's aggressive questioning of Trump's history of sexist comments in the first debate and Jake Tapper's inquiry about whether Bush is "a puppet for your donors," Milwaukee's proceedings featured a series of softball questions and pleasant banter between hosts and candidates, fostering an atmosphere more redolent of a two-hour supercut of stump speeches than a clash of political philosophies.

Over the course of the evening, Cavuto joked good-naturedly about Carson's high school record, Baker defended Trump from attacks on his trade policy and Bartiromo accused President Barack Obama of calling Mitt Romney a "Cold War dinosaur." (He did not.) The debate featured no "gotcha" questions, no accusations the moderators were in the bag for the Democratic Party and no mention the United States is on a six-year streak of economic growth. The trio was eager to prove they weren't like regular moderators — they were cool moderators.

One exchange was particularly indicative of the debate's tone. After Baker asked former Hewlett-Packard CEO Carly Fiorina how she would respond to the claim Democratic presidents are better at creating jobs than Republicans, she ignored the question in favor of a stump speech on big government, a three-page tax code, regulation reform and the need to "take our government back," Baker did not press for an answer to his question. Instead, he thanked her, twice.