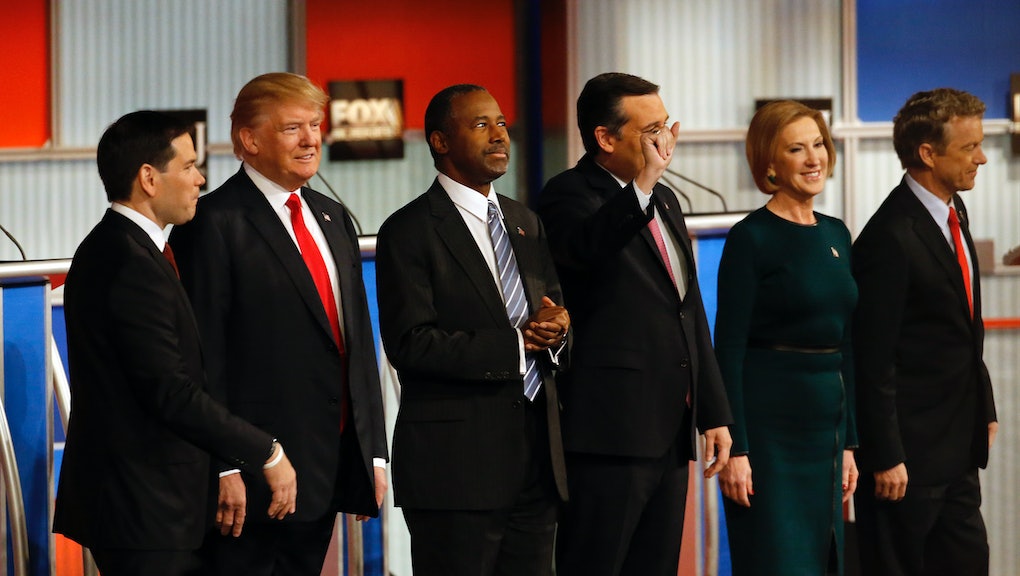 What Republican Candidates Said About a $15 Minimum Wage, And Why They're Wrong

The fourth Republican presidential debate kicked off with a surprisingly substantive policy question: What do you make of the rising national movement for a $15 wage?

Fox Business Network host and moderator Neil Cavuto began by noting the protests for the $15 minimum wage across the country on Tuesday, and asked Donald Trump whether he was "sympathetic to the protesters' cause."

"I can't be, Neil, and the reason I can't be is that we are a country that is being beaten on every front. Economically, militarily — there is nothing that we do now to win," Trump said. "We don't win anymore. Our taxes are too high, wages too high — we're not going to be able to compete against the world."

Trump went on to say that he didn't believe the minimum wage should be raised at all.

"I hate to say it, but we have to leave it the way it is," Trump said. "People have to go out, they have to work really hard, and they have to get into that upper stratum. But we cannot do this if we are going to compete with the rest of the world."

"Every time we raise the minimum wage, the number of jobless people increases," Carson said. "This is particularly a problem in the black community. Only 19.8% of black teenagers have a job, or are looking for one. That's because of those high wages. If you lower those wages, that comes down."

"If I thought that raising the minimum wage was the best way to see people increase their pay, I would be all for it. But it isn't," Rubio said. "Here's the best way to raise wages: Make America the best place in the world to start a business or expand an existing one."

That three Republican candidates rejected the idea of raising the minimum wage should surprise no one. Equally predicable were the tired myths that they peddled to justify their positions.

The idea that the U.S. will be vanquished by global competition by raising the minimum wage or that it would necessarily cause mass job losses is doubtful. The federal minimum wage hasn't been raised since 2009, and last year hundreds of economists, Nobel laureates among them, signed a letter saying that raising it from $7.25 to $10.10 would have virtually no negative effect on the employment rate and would boost growth by creating demand.

As for Rubio's point that it would be better to make the country more hospitable to launching business — that's a dodge. Business-friendliness and minimum wage laws aren't mutually exclusive, and there's nothing about, say, tax codes designed to aid the growth of small business, that require wages to be be low. The reality is that a significant portion of the small business world is supportive of a higher minimum wage. The reason? It increases productivity and decreases turnover.

Finally Carson's point on the high unemployment rate among black men is barely worth dignifying with a response. The reason they're struggling to find jobs isn't because wages are too high. It's because of structural factors: their disproportionate suffering from deindustrialization, mass incarceration, and racial discrimination.

There's a serious debate to be had about how to raise the minimum wage. This wasn't it.