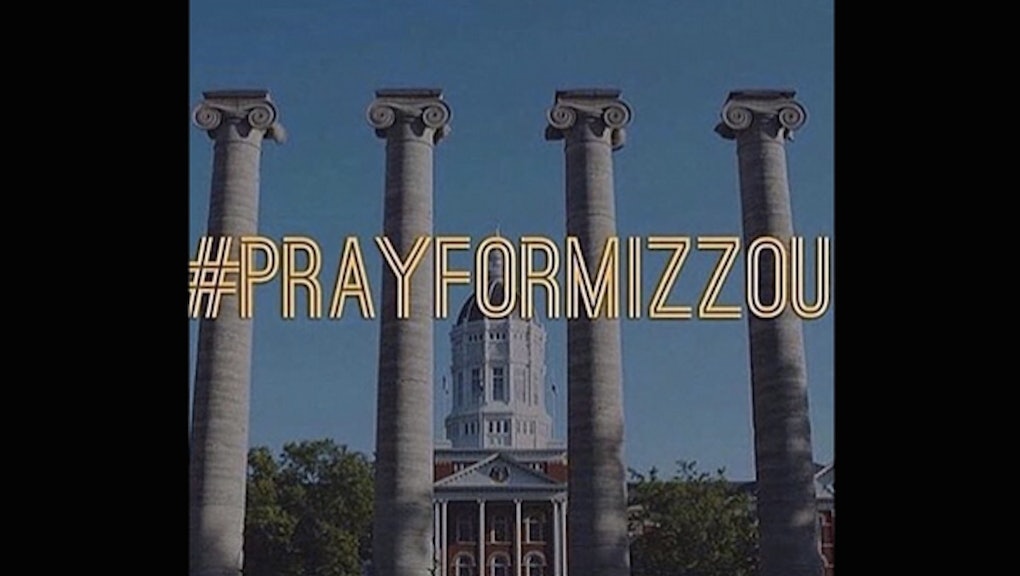 Recent events at the University of Missouri, Columbia, caught the attention of social media users this week, causing the hashtag #PrayForMizzou to begin trending Monday. The campus has been in a tumultuous state over the school's sometimes antagonistic culture toward minority students, leading to a Missouri University of Science and Technology student's arrest on Wednesday after he posted taunting, threatening messages online. University of Missouri system president Tim Wolfe and the school's Columbia campus chancellor R. Bowen Loftin both announced  their resignations after a student group protested the school administration's response to the campus' race issues.

Security notices went out to dorm buildings after a series of suspicious threats were posted online to the popular social media app Yik Yak. Another threatening phone call was made to the campus' Black Culture Center on Tuesday, according to NBC. In a message posted to Twitter Wednesday morning, Loftin wrote the suspect who made the online threats had been apprehended and "was never physically near campus."

Loftin had previously said that campus police were aware of the threats, had "increased security" and that anyone who felt unsafe should "call 911."

The #PrayForMizzou trending hashtag follows weeks of racially charged incidents across the campus, including a student group Concerned Student 1950 calling for increased racial awareness, inclusion and the need for a safer campus. Those demands included the system president's resignation as well as a formal apology to be made in a press conference.

Reports of what many described as racially charged activity on campus began circulating across Twitter Monday night, leading some University of Missouri students to fear that violence could erupt on campus.

The issue has sparked conversations about discrimination and campus politics, particularly how they relate to race:

University of Missouri isn't the only campus in the United States facing racial tension and protest. Yale University students have been protesting since a fraternity reportedly held a party reportedly for white women only, among other recent campus events seen as discriminatory, the Washington Post reported. The university's president, Peter Salovey, said in a statement he is "deeply troubled," according to Time.