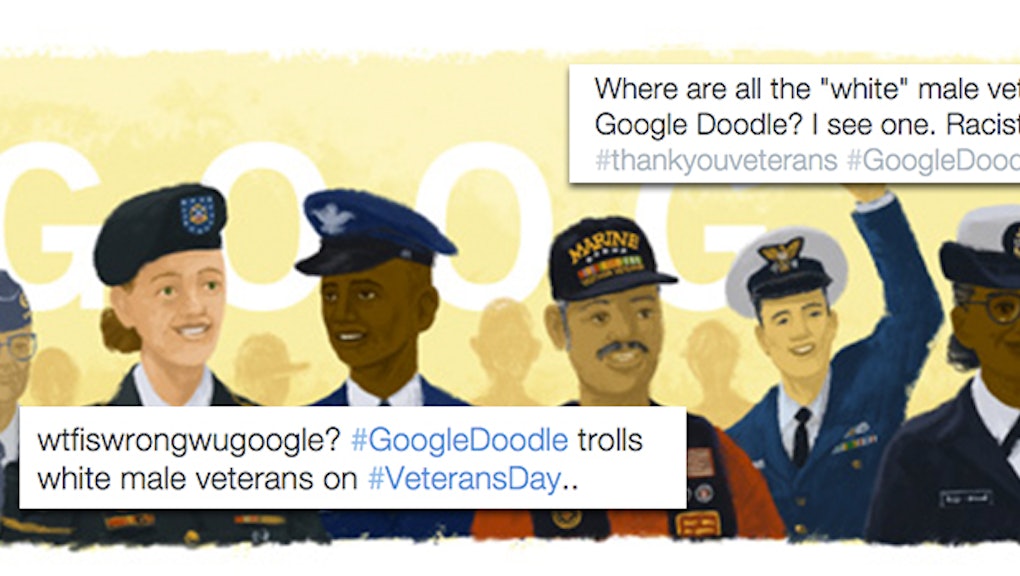 As the recent uproar over Starbucks' apparently not-festive-enough holiday cups has demonstrated, a contingent of right-leaning Americans has taken to bemoaning what they perceive as the country's downward death spiral at the hands of political correctness.

Some critics take issue with the apparent ethnicities of the veterans depicted. Of the seven veterans in the cartoon, six appear to be people of color, and one is light-skinned. Critics say the Doodle fails to represent the many white veterans in America. Moreover, one person wrote, Google is "unfairly trolling" these white veterans by highlighting ethnic minorities.

A number of people have taken to Twitter to express their Doodle-focused disgust.

One critic even brought Republican presidential candidate Donald Trump into it:

According to a 2013 study by the National Center for Veterans Analysis and Statistics, white veterans comprise 66.3% of the total veteran population since 9/11 — compared to 90.9% around World War II and 82.9% around the Vietnam War.

A 2011 study by the same organization predicted a decrease in the overall veteran population by 2040, while in the same time period, the percentage of minority veterans is expected to rise from about 20% to about 34%.

Veterans compared to active duty: In 2013, minority veterans comprised roughly 21% of the country's total veteran population, according to a study on VA.gov. That same year, 30.7% of active duty service members identified as nonwhite, according to one demographics report.

Given the long history of racial discrimination within the U.S. military, one might think to praise Google for celebrating diversity among our veterans. As in all workplaces, diversity in the military has benefits far beyond fair representation. Studies have shown, for example, that companies are less productive when everyone thinks alike. The more diverse a workplace is, the more innovative and creative its ideas tend to be.