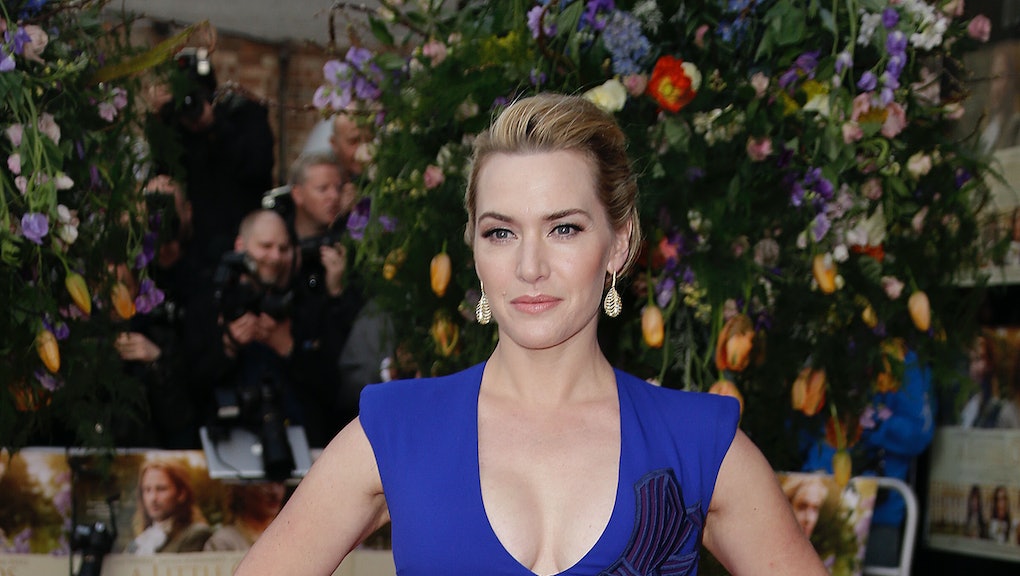 In the battle over whether actors should talk publicly about the gender pay gap, factions are quickly forming. On one side, Patricia Arquette, Jennifer Lawrence and Bradley Cooper campaign to become more transparent. On the other, there's Jeremy Renner saying it's not his problem — and, as of this week, Kate Winslet saying talking so openly about money is "vulgar."

In an interview with BBC Newsbeat, the Oscar-winning actress said she has "a problem" with conversations about pay equality in Hollywood happening in such public spaces. "I understand why they are coming up but maybe it's a British thing," she said. "I don't like talking about money; it's a bit vulgar, isn't it?"

Winslet also said she hasn't had to deal with sexism in the film industry, and that she would know how to deal with it were it to happen. "I find all this quite uncomfortable," she told BBC Newsbeat. "I haven't ever felt that I've really had to stick up for myself just because I'm a woman."

Instead, Winslet is happy with where her career is. "I am a very lucky woman and I'm quite happy with how things are ticking along," she said.

Her comments come in sharp contrast with recent moves forward on the pay gap debate. Arquette used her best supporting actress acceptance speech at the Academy Awards in February to blast both the industry and the country as a whole for not having equal pay. "It's our time to have wage equality once and for all and equal rights for women in the United States of America," she said, to Meryl Streep's famous delight.

Lawrence, meanwhile, called for women to stand up for pay equality and be aggressive in negotiations in an op-ed for Lena Dunham's Lenny newsletter in October. These are the conversations, it seems, to which Winslet is objecting.

On a basic level, Winslet's feelings are understandable. Talking about money is innately uncomfortable thanks to the political and social connotations that come along with it. It's a cultural taboo. Her personal preference to not talk about it is disappointing, but that's her prerogative.

Saying that others who choose to be vocal are "vulgar," however, is taking part in the very cycle that keeps the taboo alive. She's enforcing the problem. While Winslet herself may have never faced sexism in Hollywood, plenty have, and still do. The film industry still grossly underrepresents women both in front of and behind the camera. The pay gap is real.

Talking about money, while uncomfortable, is the way to change the situation. Progress isn't always pretty. Oftentimes, it's quite "vulgar." But that vulgarity is necessary.