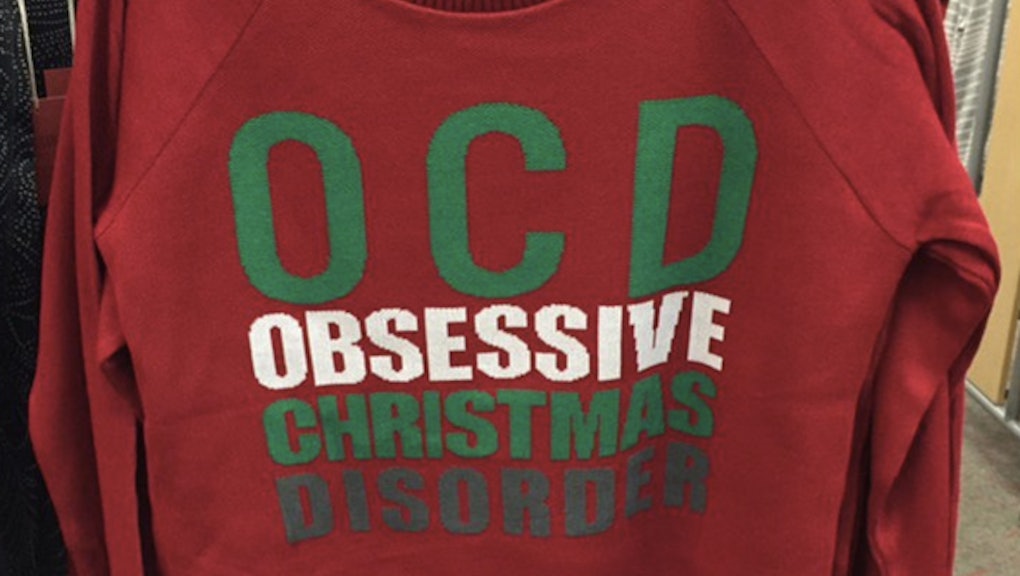 Target is gearing up for the holiday season with extended Black Friday hours, 10 days of deals and Christmas sweaters that many shoppers have found offensive. A new addition to the company's website and retail stores comes in the form of a seasonal sweater, with the term "OCD" and words "Obsessive Christmas Disorder" emblazoned across the front. It's a clear play on words that has many customers up in arms, saying the nationwide chain is making light of a serious mental illness — OCD, or obsessive compulsive disorder.

"Hey Target this sweater isn't cute or funny," one Twitter used wrote on Oct. 29, sharing a photo of the sweater in a Target store. "OCD is a serious mental illness that shouldn't be mocked."

Another user tweeted the image, writing, "I'm calling on Target to remove the #OCD sweater! Please RT if you stand for #mentalhealth!"

Other Twitter users accused the company of marginalizing customers with mental illness, and are planning on boycotting the chain:

Target's response: Although some shoppers said the Christmas sweater is belittling to those with mental illness, Target isn't planning on removing the sweater from stores or its website, the company said. "We never want to disappoint any of our guests and apologize for any discomfort," Target spokesman Josh Thomas said in a statement, according to USA Today.

One Twitter user with OCD laughed off the controversial sweater, writing Wednesday, "As someone who has OCD I don't see any reason to be angry about Target's 'offensive' sweater — it's perfectly even!"

Nearly 3.3 million people between the ages 18 and 54 in the United States have OCD, according to the National Institute of Mental Health. The illness is often characterized by abnormalities in brain function typically discovered among adolescents and young children. "Left untreated, obsessions and the need to perform rituals can take over a person's life," according to the NIMH. "OCD is often a chronic, relapsing illness."