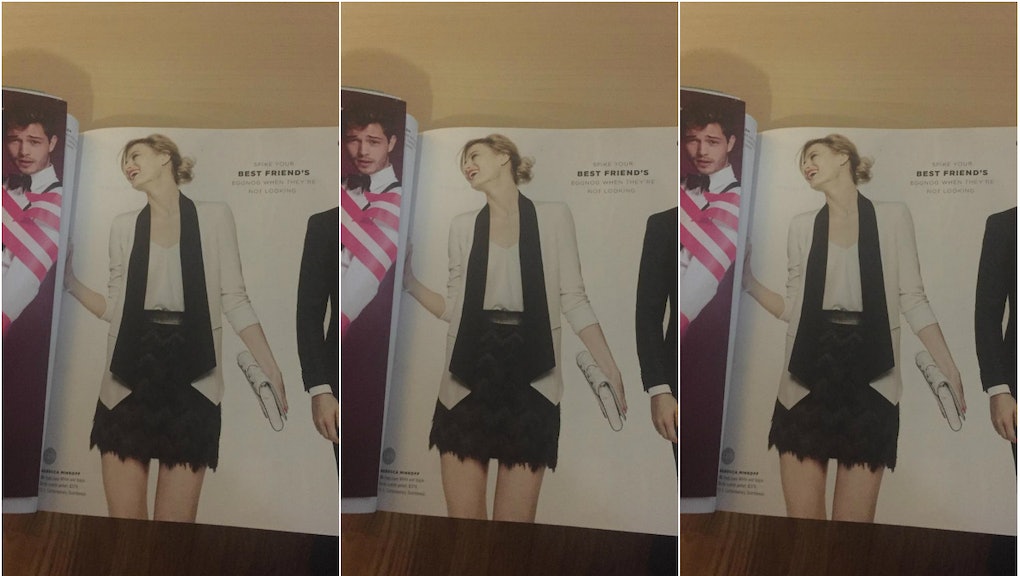 7 Questions We Have About Bloomingdales' Questionable "Date Rape" Catalog Photo

With the holiday shopping season approaching, Bloomingdale's is the store on everyone's lips. The department store has been under fire for the past 24 hours since a photo from the holiday catalog made its way onto the all-seeing Internet.

The photo: a man staring intently at a laughing woman, with the caption, "Spike your best friend's eggnog when they're not looking."

Naturally, the combination of the foreboding caption with the cheerful photo prompted several questions, many of which have been echoed on Twitter and Facebook in the past day. The two words that can't help but be mentioned are "date rape" — which is never really what you want to evoke with a fun, playful fashion ad.

1. Who thought this caption would be funny? No, really — do friends really spike each other's drinks for fun at parties in some festive ritual we don't know about?

2. Did no one approve this ad before it went to print? Like, literally no one?

3. Why does it say "best friend"? That pair doesn't exactly look like BFFs to us, based on the look on his face. Speaking of which...

4. Was it a total accident that the male model in the photo looks eerily like Robin Thicke in the "Blurred Lines" video?

5. What's with stores pushing egg nog and other holiday vibes on us in early November? We haven't even had Thanksgiving yet!

6. Can we talk about the fact that a lot of egg nog isn't even good?

7. In all seriousness, is this the unfortunate result of a society that doesn't talk openly about sexual assault and date rape?

Mic reached out to Bloomingdale's to ask a few of these questions. A rep for the store declined to answer specific questions, but did reiterate the statement the brand already tweeted on Tuesday: Everyone involved is really, really sorry.