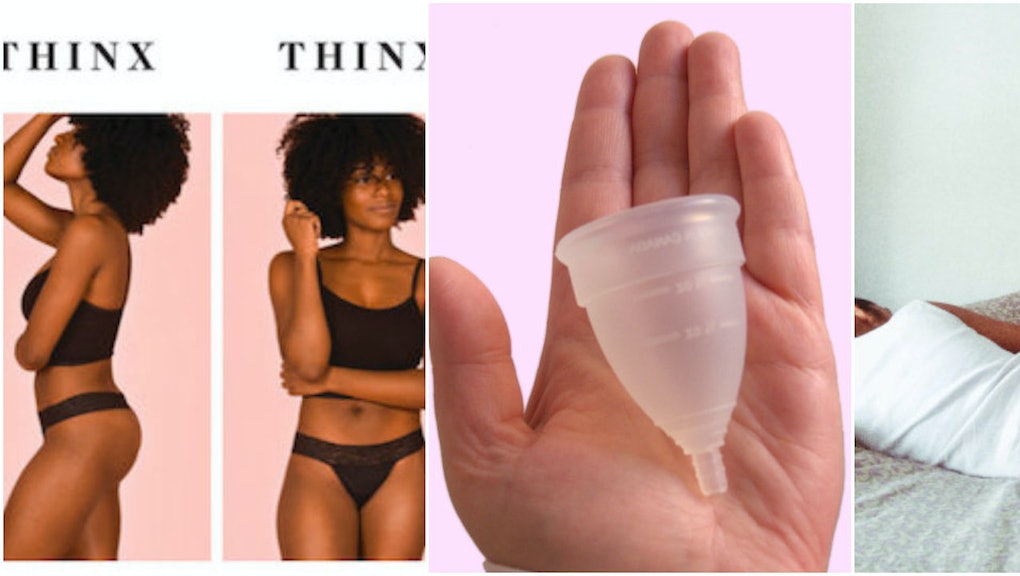 Meet the Women Who Want to Lead a Menstrual Revolution

As long as women have menstruated, they haven't wanted to. Bleeding out of an orifice for a few days at a time is a hassle, and despite some who believe the ability to bleed and not die is proof of a woman's power, many women would gladly give it up for a life of unstained underwear.

This overwhelming view of the period as burden is what has traditionally driven the mainstream menstrual product market. Anything to do with a woman's privates is seen as shameful, something to be hidden and never spoken of. "Get your tampons and pads, keep them in your purse and deal with it yourself" has been the message most women have had to deal with, and it was a message that many women have taken to heart.

However, a new "menstrual movement" has been gaining steam in all sectors of the market. Over the past few years, a number of alternative menstrual products have hit the market, from the DivaCup to Thinx panties to organic cotton tampons to the Looncup, which uses Bluetooth to track your period. And with these products has come an increased awareness of the issues of safety and access.

In the U.K., tampons and pads are currently seen as a "luxury item" and taxed as such, and women across the country are taking to the streets and to the Internet to protest. These products are proof that women no longer want to be silent about their periods, and that periods are more than a personal issue. And that's certainly not limited to the U.K. — the U.S. is seeing its own menstrual revolution as well.

Periods are political. As much as periods are a personal issue, they are also a social issue and a political issue. That's one thing many startups like Conscious Period, which donates a box of pads to a woman in need for every box bought, are trying to address.

"We aren't able to meet the menstrual needs of women in this country. It's absolutely outrageous," Annie Lascoe, co-founder of Conscious Period, told Mic. Menstrual products are not covered by food stamps in the U.S., which means lower income women have to stock up in advance to afford them. And while Canada just got rid of its tampon tax, in most U.S. states tampons are often taxed as nonessential or "luxury" items rather than as medical products.

There are environmental and other health concerns posed by tampons as well. The Food and Drug Administration, which approves food and pharmaceutical products, classifies tampons as medical devices but does not require tampon and pad companies to disclose what their products are made of on their packages because none of the regularly used ingredients have been proven health risks. "In the absence of data showing an association between any ingredient and any risk to health, nor any legal theory under which the FDA could reside, the FDA [lacks] the authority to mandate ingredient labeling," according to a Harvard Law School webpage.

Most mainstream tampon and pad companies mention what their products are made of on their websites, and many include rayon or polyester. Besides being questionably biodegradable, many women aren't comfortable having those materials in such close contact, as it were.

Women's bodies are also often used as political lightning rods. "Male politicians speak about women's bodies without proper knowledge of our anatomy," Lauren Towles, founder of Hack the Flow, a "period-positive hackathon" that took place in New York on Nov. 7, told Mic. "[They] don't want to speak the word 'tampons' in hearings, yet are trying to pass laws that affect us women."

Crowdsourcing the period: Many brands and startups are now questioning how these products are made and who has access to them. "For me, the menstrual revolution is questioning what's in our products," Lascoe said. "Why has there been no innovation?"

While period-tracking apps like Clue and Period Tracker Lite are modern innovations, when it comes to the rest of the alternative products in the "menstrual revolution" — organic tampons, absorbent panties, menstrual cups — nothing is particularly new. We've had the technology to make tampons out of organic cotton, or a latex cup, for years. So why are women becoming more open to alternative products and calling for change in how they are regulated?

There are a few driving forces behind this change. From a health perspective, concerns like toxic shock syndrome still exist: Earlier this year, the risk of TSS was publicized when a young model lost her leg to the syndrome. There's also a widespread environmental concern of how much waste menstrual products create.

But the largest factor of the menstrual revolution may be the emerging crowdsourcing economy. Women no longer have to solely rely on Kotex or Tampax to make the products they want to see in the world. They can look to independent startups for innovation or even start something up themselves.

"I think the reason it's blowing up is there are just so many stakeholders involved in this conversation," Margo Lang, the co-founder of Conscious Period, told Mic. "There are so many people coming at it from different angles, and there's this unifying component of all having a period."

Taking back control: What is making women angry is that these startups and innovations are being introduced to a world that still sees periods as a burden and menstrual products as luxury items. In fact, many startups have fallen into that idea, treating the period as a problem to be solved rather than a bodily function that needs to be accepted.

"Menstruation-tracking apps and devices are part of a general trend for people to want to exert control over their bodies by acquiring knowledge about bodily functions," Deborah Lupton, a professor at the University of Canberra and author of the paper 'Mastering Your Fertility': The Digitized Reproductive Citizen, told Mic.

"Given that women's bodies are often culturally represented as chaotic, messy and out of control, prone to unexpected releases of fluid and emotional volatility compared to the idealized contained and regulated male body, these technologies are directed at helping women overcome these aspects of their bodies," she added.

With men in charge of the medical and political landscape for so long, the period became a problem. "This has been a fascination by men since the beginning of time, and instead of trying to better understand [menstruation], they resort to control," Towles said.

To challenge that, "women are letting people know that we are in control of ourselves," Towles told Mic. That means women are setting the menstrual talking points on their terms.

Changing the conversation: While becoming educated about bodily functions is certainly important, more women are perhaps seeing that to destigmatize the period, it needs to be accepted and understood for what it is and not viewed as a burden that needs to be "overcome." There hasn't just been innovation in the products available but also in the general language surrounding the issue. Menstrual underwear startup Thinx panties is "committed to breaking the taboo around menstruation," while Hack the Flow is "focused on eliminating stigmas surrounding menstruation to become a more period-positive society."

According to Lascoe, this whole movement is about "choice, options and access." Whether you choose to use a cup that tracks your flow, discreet tampons, take birth control to keep your period from happening or bleed into your panties without any protection at all, choices and options have been covered. Now, the conversation is shifting to access.

Menstruation is a matter of public health, of poverty, of the environment and of safety. It is also a matter of ensuring women's choices are equal, that she not only has access to safe menstrual products but to a range of products, and that she can choose whichever fits her life without judgment. To make that happen, it's going to take more than a DivaCup. It's going to take a revolution.