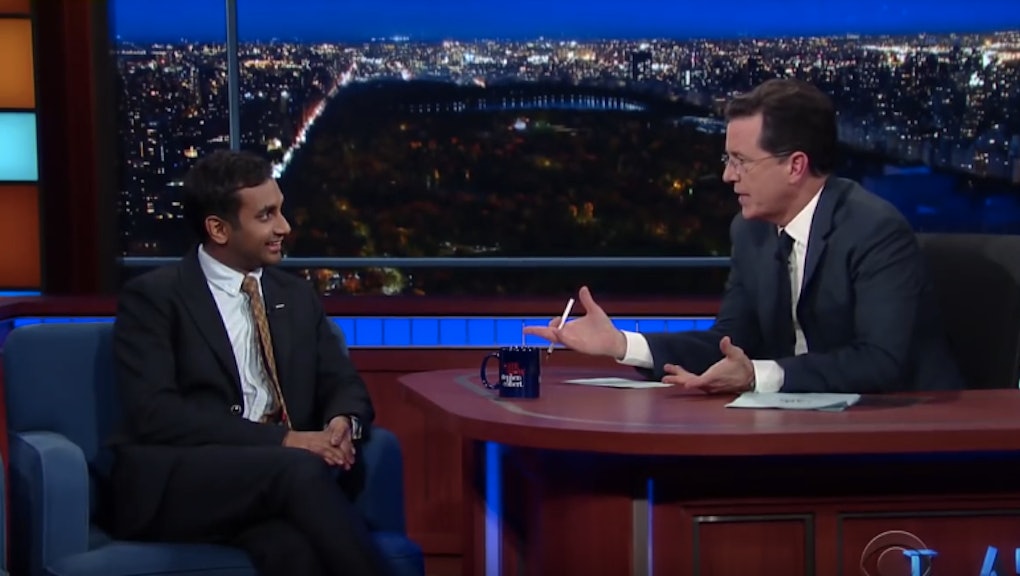 Actor, author and comedian Aziz Ansari could have easily stuck to a boring, self-promotional script while appearing on Late Night With Stephen Colbert to plug his hit Netflix show, Master of None. But instead of repeating old quips or amusing anecdotes, Ansari used the opportunity to hilariously skewer a much bigger problem: the lack of diversity in their industry.

"Stephen's the first late night host from South Carolina and the bajillionth white guy," Ansari pointed out after Colbert introduced him. "Very interesting measure of progress."

Colbert then jokingly asked Ansari if having him on as a guest counted as a measure of diversity, Ansari facetiously responded affirmatively.

When Colbert later identified Ansari's book by the incorrect title, and Ansari joked that a staff member should be fired for the offense, Colbert picked up the gauntlet.

A bigger problem: Though their approach was playful, the problem these comedians skewered is pervasive in all levels of their industry. This past year, women, people of color and older TV writers were hired on fewer TV shows than the previous hiring season, according to the Writers Guild of America's most recent diversity report. The percentage of employed writers of color and women writers have declined in recent years and are underrepresented among executive producers, according to the report. People of color were also found to be underrepresented on the executive side: 96% of TV network and studio heads and 93% of senior management in the TV industry were white, according to the Hollywood Diversity Report.

Not only does this lack of diversity fail to represent viewers — people of color make up nearly 40% of the U.S. population — it detrimentally impacts everyone's bottom line. TV shows with more ethnically diverse casts actually receive higher ratings, according to a 2014 study by University of California, Los Angeles' Ralph J. Bunche Center for African American Studies, which also issued the Hollywood Diversity Report.

Moving beyond representation: But diversity isn't a numbers game alone. Ansari wants diversity in the industry to go a step further and authentically reflect the experiences of all viewers — an experience at odds with the current television landscape.

"Even at a time when minorities account for almost 40% of the American population, when Hollywood wants an 'everyman,' what it really wants is a straight white guy," Ansari recently wrote in a New York Times op-ed. "But a straight white guy is not every man. The 'everyman' is everybody."

It's a goal he took into his own hands when creating Master of None.

"I think the way we do diversity in the show, it's not done in that kind of window-dressing fashion," Ansari told Refinery 29 of his show. "Sometimes you watch a movie and they'll just have Ludacris be the friend. And it's like, I don't think Ludacris would be friends with these white people! ... I don't buy this! And it takes you out of it."