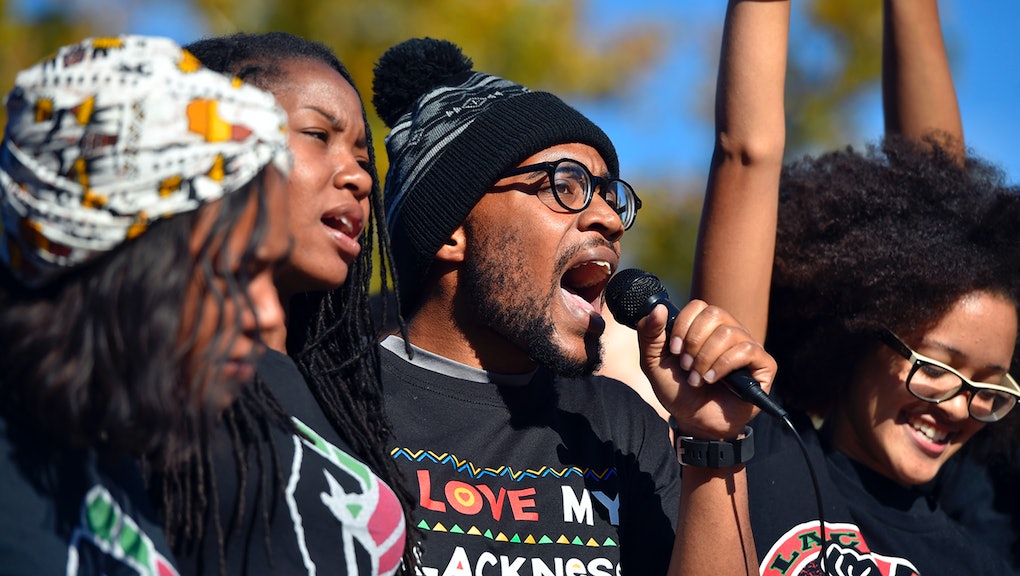 To Understand How Big the Mizzou Protests Are, Check Out What's Happening in Ferguson

Ferguson, Missouri — Tory Russell still remembers like it was yesterday, the turbulent night last November when the verdict came down in the Michael Brown shooting.

Russell, 31, grew up a short drive from the Canfield Green Apartment complex where Brown was shot and killed in August 2014. On the Nov. 24, 2014, evening the St. Louis County grand jury decided not to indict Officer Darren Wilson, Russell vividly recalls ducking for cover in his second-floor office overlooking West Florissant Avenue as bullets flew through his window and protests raged below.

Russell's life was turned upside down. A former high school football coach with a presence that fills a room, Russell got thrust onto the national stage as a community organizer. Today, he lives and works in downtown St. Louis and is one of the co-founders, with recording artist Tef Poe, of Hands Up United, a grassroots organization focused on creating a national movement for racial equality.

I met Russell at Ferguson Burger Bar & More, around 100 miles east on I-70 from the University of Missouri. The Burger Bar has become something of an institution in Ferguson, as it was one of the only local businesses that did not board up its windows and remained open the night of the Nov. 24 protests. Russell and I spoke while retracing Brown's steps down West Florissant Avenue, making our way past the now abandoned parking lot where QuikTrip once stood and walking down the adjacent street that runs through the apartments where Brown was killed.

Russell, with another Hands Up United organizer, was at Mizzou last weekend, drawing on his organizing experience in Ferguson to lend support to the Concerned Student 1950 activists who led the movement to ouster University of Missouri system president Tim Wolfe and University of Missouri chancellor R. Bowen Loftin.

What's clear in talking to Russell, however, is the Mizzou students' success in forcing Wolfe and Loftin to resign has actually empowered him in turn. As a direct result of what happened at the university, Russell is returning to Ferguson with the renewed faith that change is possible.

Mizzou has reverberated far beyond campus: Russell feels the Concerned Student 1950 movement at the University of Missouri has not only brought about monumental change on campus, it has also provided hope for the racial justice movement more broadly. This, he says, comes at a time when the people of Ferguson desperately need it.

"In Ferguson, we're not seeing a lot of wins," Russell told Mic. "Some small things have happened, but nothing really systemic has changed. That leaves a lot of people across the country wondering what's next."

While sweeping policy reform may be slow to come to Ferguson, Russell believes what happened at Mizzou represents an important tipping point for change. "I've received calls from young people all over the country about Missouri," Russell said. "At Mizzou, we saw the power of young black people, young oppressed people, organizing in their own space, with their own power. That's a win. That's a direct win."

A large part of Russell's motivation in starting Hands Up United after Brown's death was his fundamental belief that local, community-based grassroots organizing is the best way to bring about broader change to the criminal justice system. To that end, Hands Up United has created a series of programs over the past year focused on training young people to become leaders in their communities.

Late last year, the organization launched a crowdfunding campaign for a Ferguson Youth Tech Program to teach computer science and Web development to the city's youth. They also launched a Books and Breakfast event series to read and discuss prominent works of black literature. On a national level, Hands Up United has been active in organizing for raising the minimum wage and also plans to champion the #NotOneDime campaign this Thanksgiving, a Black Friday boycott that calls for people to buy from black-owned businesses.

Russell is adamant that community action, not hashtag activism, will pave the way forward. The Mizzou victory, Russell said, provided a concrete model for how grassroots mobilization can actually succeed. "People can't eat tweets," he said. "I can't build a new house with hashtags. Things are not going to change unless you physically go out into communities."

Perhaps, most importantly, the Mizzou protests have given Russell faith in his own path forward as a leader. As a first-time leader of a movement, Russell is dealing with the typical struggles of growing any large organization: raising money, growing membership, maintaining momentum and picking the right battles.

Mizzou has given him renewed energy. "Because of the Mizzou students, I'm hopeful," Russell said. "Before this moment, I didn't really didn't know how it was going to go. I didn't know if white supremacists would kill me, police would lock me up or if people would turn a deaf ear to the local community. The fact that we have pockets of students, pockets of people, still involved and still engaged [has inspired me that] it's my job to provide something for them too."

Lessons for the future: While forcing Wolfe's ouster was an important first step, Russell believes the next phase to change the climate of racial intolerance on campus will be no less difficult. Indeed, as Mic previously reported, since Wolfe's resignation Monday, students on campus have faced serious threats of violence.

"For Mizzou, what's next is the hard part," Russell said. "Tim Wolfe is one person. He may symbolize something, but the institution is bigger than whether or not he's a racist."

What's next for Mizzou, Russell said, all ties back to his theory of organizing locally to build support for change nationally. "The fundamental question every leader has to answer is, 'After your tweets, after your panels, what are you providing for the people and do you have a theory and method of change?'" Russell said students should demand to get rigorously involved in the process to select the next chancellor and system president, who he said he hopes will be someone who is black.

Now, Russell has his sights set on something broader. "The fundamental question going forward is, how we change the institution of education in America?" he posed. With student protests spreading this week to other institutions like Yale University and Ithaca College, Russell believes his theory of change is only just beginning to get validated.