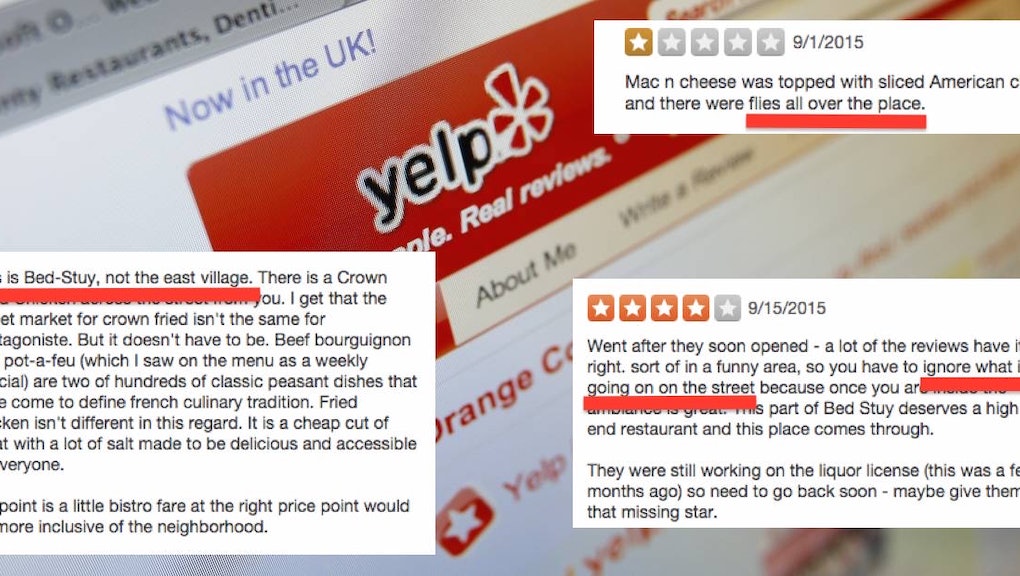 Yelp reviews not only give readers an online window into restaurants, but they also reveal a lot about the reviewers' attitudes toward the surrounding neighborhood.

That's according to a study about gentrification and race published in the Journal of Consumer Culture. Researchers Sharon Zukin, Scarlett Lindeman and Laurie Hurson examined two swiftly gentrifying New York City neighborhoods — Bedford-Stuyvesant, which is predominantly black, and Greenpoint, which is predominantly white — and compared the tenor of restaurant reviews for each.

By and large, the researchers found, customers viewed Greenpoint through a decidedly affectionate and nostalgic lens, whereas Bedford-Stuyvesant was often mentioned in the same breath as grit and destitution. Reviewers were concerned about the preservation of Greenpoint's history and culture, but Bedford-Stuyvesant received no such concern — its transition was seen as going from "bad" to "good."

Though the reviews tended to see both neighborhoods as promising locales — likely a reflection of the unassailable gentrification happening there — there were considerable differences in the ways they viewed this change.

Greenpoint, a historically Polish neighborhood with a majority white population, was seen as something worth saving. "Most Yelp reviewers feel positive about the white neighborhood, where they consider the traditional Polish restaurants 'authentic' and 'cozy,'" the study found. Reviewers tended to look at Greenpoint's ethnic exoticism in a positive light — a sadly dissolving remnant of old New York-style cultural enclaves.

Bedford-Stuyvesant, on the other hand, was not afforded this kind of nostalgia. Its history and culture were largely ignored; when they were recognized, they were mentioned as things worth changing. Reviewers "feel negative about the black neighborhood, which they criticize for a dearth of dining options and an atmosphere of dirt and danger," the study noted. One reviewer wrote, "We are happy to witness a changing neighborhood," while others used words like "gritty," "sketchy," "hood" and "ghetto."

"Trendy" vs. ethnic establishments: As CityLab noted, the descriptions of the "traditional" restaurants — those serving Polish food in Greenpoint and those serving soul food and Caribbean food in Bedford-Stuyvesant — were especially telling.

"When it came time to rate Bed-Stuy's traditional, black-owned restaurants, many — if not most — reviews were negative and often reflected the same stereotypes that are noted above. These reactions lie in opposition to reviews of the cozy, authentic restaurants in Greenpoint. In this way, the study points out, 'Yelp reviews mobilize racialized biases to effect a discursive redlining of majority-black districts.'"

The contrasting attitudes toward each neighborhood's "authentic" offerings is perhaps the clearest example of the racial and ethnic double standard: Greenpoint's cultural establishments were seen as valuable institutions worth protecting, whereas Bedford-Stuyvesant's were treated as second class.

Approaching gentrification: The differences in these attitudes may not be particularly shocking, but they provide a new way in which to approach issues of gentrification. As the study warns, "intentionally or not, Yelp restaurant reviewers may encourage, confirm or even accelerate processes of gentrification by signaling that a locality is good for people who share their tastes."

Food is commonly used as an entryway into other cultures and groups, but as the study demonstrates, not all groups are treated the same — and this often reveals some uncomfortable truths about how we treat the "other."