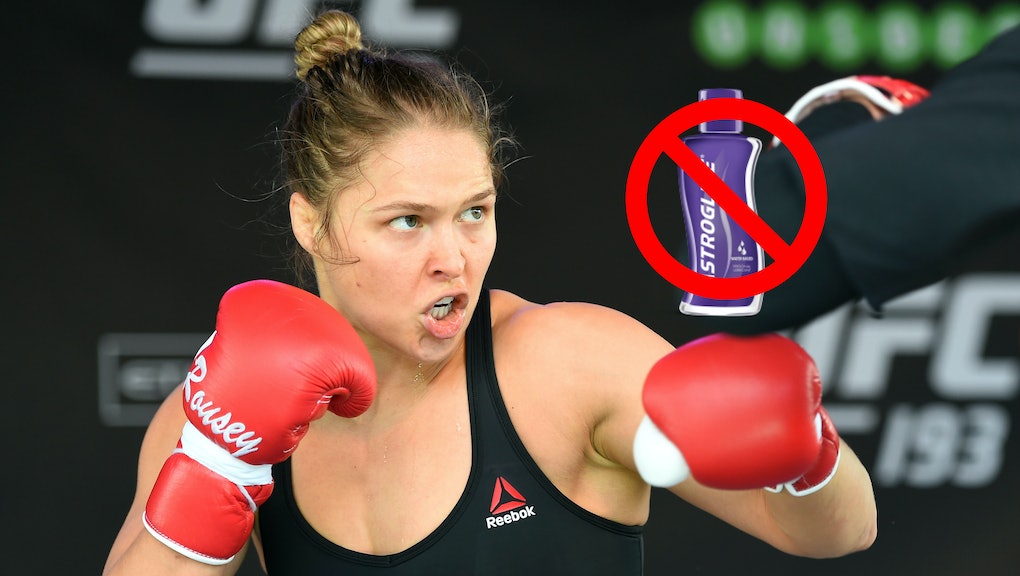 Ronda Rousey Thinks Women Who Use Lube Have "Sandbox" Vaginas

While there is much to love about often-badass UFC fighter Ronda Rousey, the MMA champ has been making waves as of late for offering some sex advice that many claim is uninformed and sex-negative. The drama began with a November 3 Maxim interview, in which Rousey slapped on a pair of spectacles and instantly transformed into a self-styled sexpert, ready to reveal the "secret to great sex."

Rousey's sex advice started out OK, with the MMA champ advising men to "take [their] time" with ladies and focus on foreplay. But then Rousey took a sharp turn on the road to Yeah, Makes Sense-Ville to get off on the exit for Problematic Town.

"In general, a girl takes a minute," Rousey proclaimed to Maxim. "He needs to get her ready. You should never need lube in your life. If you need lube, then you're being lazy... and you're not taking your time." (Lies! Misinformation! Deception. Disgrace.)

Needless to say, it wasn't long until the Internet's clock struck think-piece o'clock — and for good reason. While Rousey made a valid point that foreplay can be essential for mutually satisfying heterosexual human mating (contrary to what straight men might think, the vagina doesn't instantly become ultra-moist the second a penis comes into the picture), Rousey's denigration of lube was more than a little tone-deaf.

As Rachel Kramer Bussel wrote for Salon, lube is often necessary for pleasurable sex, regardless of how much foreplay is involved — and one ought not be ashamed of wanting to lessen the friction with a lil' Astroglide (and/or Gun Oil, if you're a man who has sex with other men).

Sex educator Aida Manduley told Salon's Kramer Bussel that there are myriad reasons why a couple might need lube to enhance their sexual escapades. "If someone is undergoing cancer treatments, going through menopause, or even taking certain medications, their natural lubrication production can dramatically change and decrease," she said. "For survivors of sexual trauma, even when emotionally feeling ready to have consensual sex, their bodies may be so dissociated that lubrication production is compromised."

All of this brings us to Exhibit B: Rousey's recent episode of the vlog series UFC 193 Embedded, in which she responds to the controversy.

"If you need some artificial material, then you're not doing your job right," Rousey says in the beginning of the video, adding:

"I thought I was doing all the girls a favor, you know, making sure that their guys put in some effort. But it sounded like some gritty kitty bitches are really fucking mad at me. I'm like, it's not my fault you're working with a sandbox."

Rousey's response suggests that she probably didn't look past the "lube-shaming" headlines enough to see what the actual argument against her comments was in the first place. Instead, she chose to take the "LOL, Internet outrage culture is ridiculous" approach.

But if your lazy lube comments lead to a slew of articles calling you out for spreading misinformation and propagating a harmful stigma against people who may already feel ashamed for needing a little liquid assistance, you might want to question whether you are, in fact, being just a little bit ignorant.

But alas, Rousey chose to take the alternate route and refer to women who need lube as "gritty kitty bitches" who are "working with a sandbox."