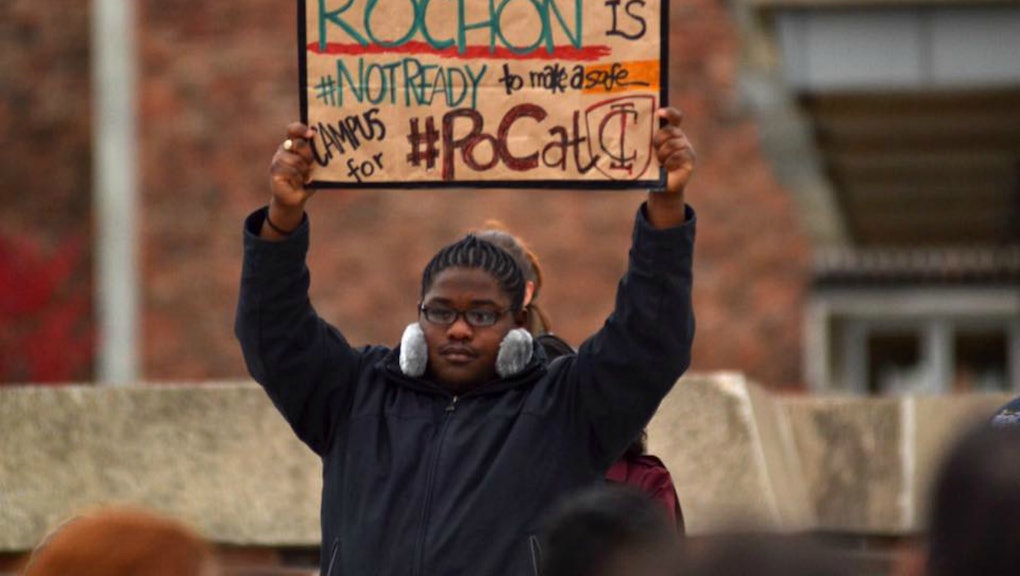 On Monday, University of Missouri system president Tim Wolfe resigned after students held high-profile protests demanding his ouster for his failure to address an atmosphere of intense racial hostility on campus. On Wednesday, student demonstrators at Ithaca College in upstate New York signaled they could be heading down the same path of confrontation with school officials.

Hundreds of students gathered on campus as part of a "solidarity walkout" to express support for the protesters at the University of Missouri, and to highlight tension over allegations of racist incidents at Ithaca.

The demonstration, organized primarily by a student group called People of Color at Ithaca College, was organized to highlight "all the injustices students of color face on this campus and other colleges nationally," according to the Facebook description of the event.

"With University of Missouri's president stepping down, we demand [Ithaca College president Tom] Rochon to do the same, as it is vital to fight against both covert and overt racism in all places of education and empowerment," the group wrote.

Many of the students participated in a "die-in," lying on wet pavement while chanting for the cause:

"Our hearts are heavy with the pain of Mizzou and Yale and Smith and every person of color on a college campus simply because of the color of their skin, the texture of their hair or their ancestry," said one student demonstrator speaking to the crowd, according to the Ithaca Journal. "This a problem of the nation. However, how can a campus dedicated to preparing us for the real world not actively foster growth to our consciousness of oppression and privilege?"

Dominick Recckio, the president of the Student Government Association and a senior at Ithaca, told Mic by phone the walkout and calls for Rochon's resignation have been a long time coming.

The background: Wednesday's protest comes at a time when both the student body and the college's faculty are holding separate no-confidence votes on Rochon's leadership. The ongoing referenda serve as a way for members of the community to articulate dissatisfaction with administrative leadership of the college. Should the numbers come out strongly one way or the other in the student referendum, which concludes at the end of the month, they could significantly shift momentum in calls for Rochon to resign.

A number of factors have contributed to the decision to hold no-confidence votes, but several racially charged incidents on campus have been a major contributor.

According to Recckio, three main developments this semester have fueled the perception the administration is being negligent in addressing racial prejudice on campus.

The first source of tension involves encounters between students and public safety officers. Following a training session with public safety officers early in the semester, a number of resident assistants claimed the officers were "racially insensitive," "aggressive" and "invalidating," according to the Ithacan, the student newspaper. One officer, holding a BB gun, reportedly remarked, "If I saw someone with this I would shoot them." Recckio says he believes the language was inappropriate, in light of the death of Tamir Rice, the 12-year-old boy killed in 2014 by Cleveland police while wielding a BB gun.

One officer, holding a BB gun, reportedly remarked, "If I saw someone with this I would shoot them."

That incident and others led to a broader discussion of how safety officers in campus were engaged in a pattern of racial profiling on campus, and eventually prompted Rochon to respond.

"The first step we must take is to acknowledge that there are members of our community who experience intimidation and marginalization," Rochon said in a statement in early September. "We must then act to stop these experiences within our ALANA [an acronym for African, Latino, Asian, Native American] community and all underrepresented communities on campus."

Rochon also announced plans for a community review board and a commitment to researching the purchase of body cameras for officers on campus.

The second major source of contention stems from comments made by J. Christopher Burch, a famous investor and an alumnus of the college. Burch was speaking on an alumni panel on campus which included Tatiana Sy, an alumna of color. At one point, Sy described herself as having a "savage hunger" in her professional career, after which Burch went on to repeatedly refer to Sy as "the savage." When she became visibly uncomfortable with the situation, he attempted to smooth it over by saying, "I think you're an amazing young woman, or I wouldn't give you that nickname."

Both students and faculty expressed a mix of disappointment and anger at Burch's remarks, which eventually resulted in an apology issued by Burch's office at Burch Creative Capital and an apology by Roch to the alumna.

The third major incident regards the language in a Facebook invitation by Alpha Epsilon Pi, an unaffiliated fraternity with no formal connection to the university. An invitation to a "Preps & Crooks" party in October explained the dress code required "preps" to dress in a polo and khakis, and "crooks" to don a "'90s thuggish style ... a bandana, baggy sweats and a T-shirt, snapback and any 'bling' you can find!" The racially tinged language incensed a number of students on campus and sparked yet another conversation about inclusivity at Ithaca College.

Combined, these events, the votes of no-confidence and the success of Missouri students in captivating national attention through their protests have empowered student activists on campus. Whether it will have the same effect as protests in Missouri and other colleges swept by protests over racism remains to be seen.