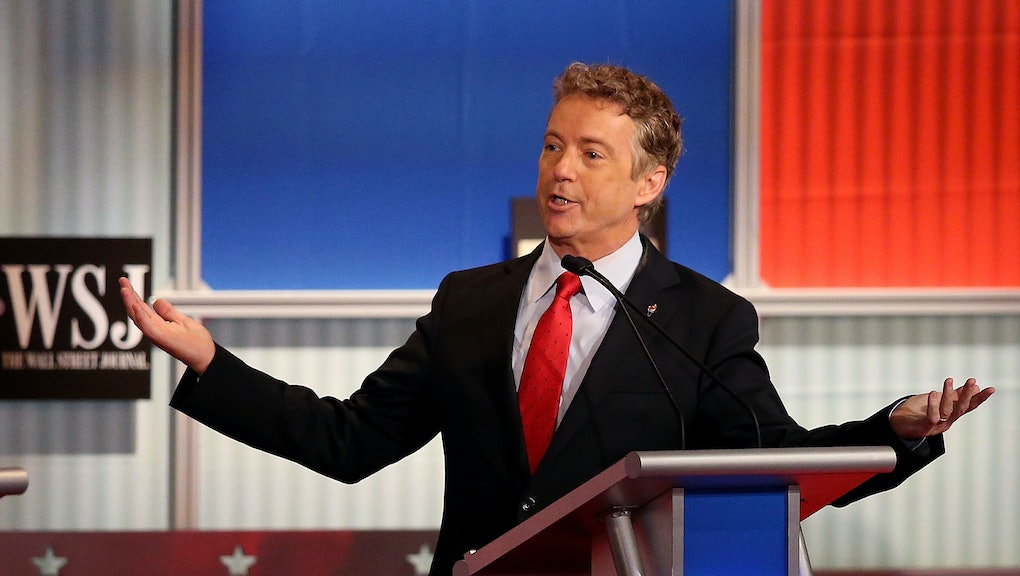 Sen. Rand Paul, a libertarian-leaning candidate for the Republican nomination in 2016, has a great track record on technology issues, and has walked the walk against pervasive digital surveillance for years. But at Yahoo's Digital Democracy Conference on Thursday, there's one thing Paul wasn't worried about: robots taking our jobs.

When Yahoo's Olivier Knox asked about the digital economy and companies like Uber, and if there should be some government intervention in order to protect the livelihoods of the American worker, Paul said "we've always had Luddites" and referred a Dilbert comic strip that goes:

Carol: My 12-year-old wants to know what career would prevent him from being replaced by a robot.

Paul isn't entirely convinced there's a crisis, saying that technological innovation always creates new jobs in the new fields invented by that progress. It's a dubious claim — there are many technologists and scholars who think that this job cataclysm will be nothing like the agricultural or industrial revolutions — but even if the revolution is coming, Paul is perfectly fine with it.

More time to chill: The often-cited number from a notorious Oxford study from 2012 says that 47% of all jobs are susceptible to automation. Paul made the same claim that economist John Maynard Keynes made nearly a century ago: that the more robots take over our jobs, the more time we'll have to kick back and get some sweet rest and relaxation.

Even if it may seem that people are more harried and work-obsessed than they ever have been, Paul is right. Overall, the developing world has seen a gradual winding down of average weekly work hours over the past 60 years — a 10.5% decrease in the United States since 1950.

But as the Economist points out, just having more leisure time isn't a net good if, as a society, work pressures and job insecurities make that leisure time qualitatively less pleasant and unequally distributed:

Work opportunities have declined for anyone without a college degree. The availability of manufacturing and other low-skilled jobs has shrunk in the rich world. The jobs that are left tend to be in the service sector. They are often both unsatisfying and poorly paid. So the value of working hours among the under-educated is fairly low by most measures, and the rise in "leisure" time may not be anything to envy.

Where Paul runs into trouble: Never mind whether we get more leisure time or how we'll spend it — for many, the real concern of the automation revolution is income inequality.

For as long as Keynesians have promised a robot utopia where we only have to work for a few hours a week, technologists have warned of a dystopia where a automation leads to a wealthy class of owners who control those robot armies. Even financial institutions like Bank of America Merrill Lynch and luminaries like Stephen Hawking agree that job automation could lead to further economic stratification.

As comfortable Paul may seem with the seemingly inevitable loss of jobs to the Internet, eventually the free- market libertarian will run into the fact that almost every proposal for rectifying that inequality — whether it's a welfare reform solution like basic income, trust-busting or some kind of progressive taxation — involves the heavy-handed involvement of the government.