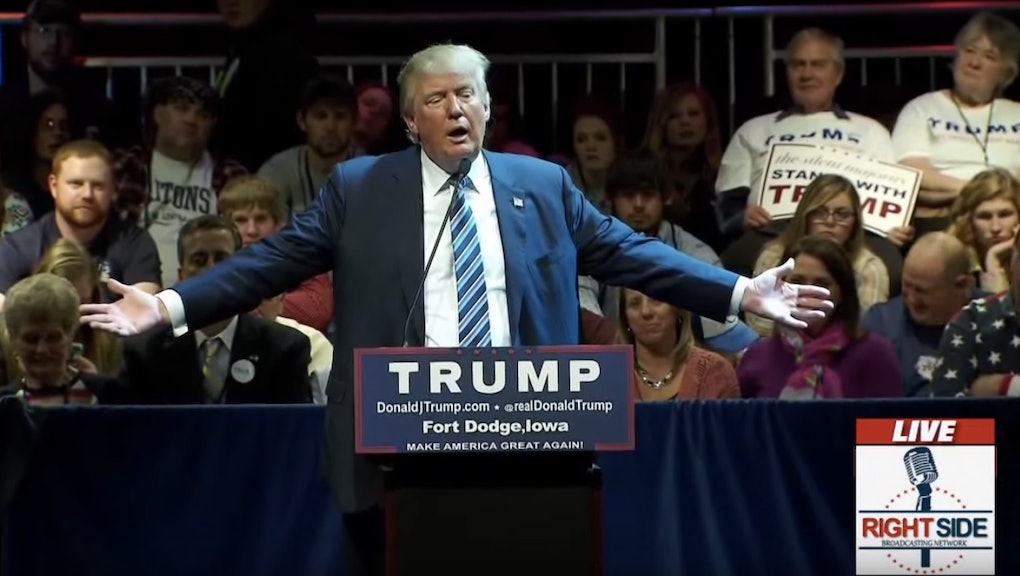 "How stupid are the people of Iowa?"

Perhaps that's a question best kept to oneself should you be, say, a presidential candidate seeking the state's blessing in the storied Iowa caucuses. Then again, this is Donald Trump we're talking about. The Republican frontrunner posed the question, all the while raising questions in the minds of many others, at a campaign event in Fort Dodge, Iowa, on Thursday. During a 95-plus-minute diatribe, the real estate mogul famous for his theatrics outdid even himself, delivering some of the most unfiltered "Trump" of his campaign to date.

Speculating about the intelligence of his audience was only the beginning.

Trump went on at length to his audience about the Islamic State group and his plan for dealing with it, which caused a minor furor earlier this year when the candidate originally refused to release it, saying it would empower the enemy. Never one for humility, Trump insisted that he knew "more about ISIS than the generals do." The candidate, however, did not elaborate much beyond his promise to bomb the terrorist organization  — though he did add that the United States' "great oil companies" could immediately swoop in to collect the oil currently in areas under IS control. "I'll take the oil," he insisted. "I would bomb the shit out of 'em."

More than an hour into his remarks, Trump set his sights on some of the other candidates he is or expects to be facing in the coming months. After some perfunctory denunciations of presumed Democratic nominee Hillary Clinton ("outside of the women card, she's got nothing going"), the billionaire ripped into his Republican opponents. Marco Rubio is "weak like a baby," Trump said when discussing the Florida senator's record on immigration. "He will not be an inspiring president," he said. "He's not tough enough to be a president." Trump declined to criticize Ted Cruz, noting that the Texas senator "says such good things about me," but he predicted that a day of combat would one day come for the two men. Bush, whom Trump famously mocked as "low-energy," only merited a passing mention.

"If you're a child molester, there's no cure"

To be clear, retired neurosurgeon Ben Carson has never been accused of child molestation. But why should that stop Trump from using the designation in proximity with his arch rival for the nomination? Trump made reference to Carson's "pathological temper," as Carson described it in his book, singling out the word "pathological." Trump said it was indicative of incurable mental disease in the same way, he said, that child molestation is an incurable "pathological" disorder. "If you're a child molester, there's no cure," Trump said.

At times it was unclear what the nature of Trump's attack was, as he criticized Carson for his alleged crimes, like attacking his mother with a hammer, and at the same time cast doubt on the veracity of those claims.

Trump then proceeded to demonstrate his own skepticism, personally showing how a belt could not prevent a knife from easily penetrating his flesh. "Anyone have knife and want to try it on me?" he asked.

Trump and Carson have been neck-and-neck in state and national polls, with Carson pulling ahead at times. Trump implored his audience not to "be fools" and stick with him, and professed open bewilderment at Carson's rise.