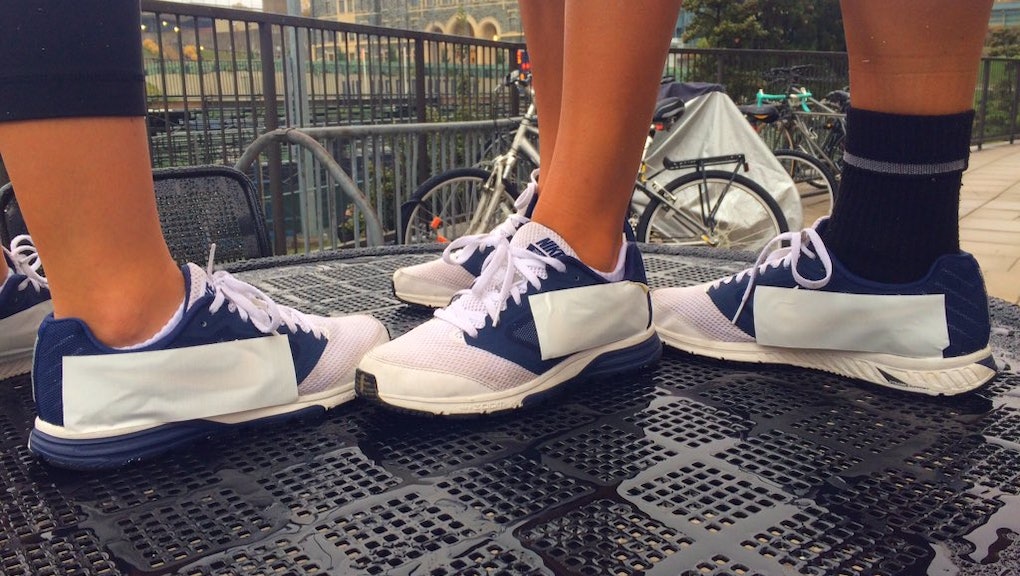 Here's Why Some College Athletes Are Taping Over Their Nike Sneakers

On Tuesday, a group of unidentified students at Georgetown University appeared on campus with white tape covering the Nike logos on their shoes. Their mission: to take a stand against Nike's questionable labor practices abroad.

Because of the university's partnership with Nike, student athletes are commonly seen sporting Nike and Jordan Brand gear during games. However, social activist Jim Keady, who advocates for the improvement of sweatshop working conditions, has been holding discussions on campus regarding the treatment of workers at Nike's sweatshops abroad.

In a student talk held Monday titled "Behind the Swoosh: Sweatshops and Social Justice," Keady discussed the improper labor practices at Nike sweatshops. According to the Georgetown Voice, he discussed how workers at the factories make only $1.25 per day and described "working and living conditions in these factories as cramped and dirty."

Keady also commented on the physical, verbal and sexual abuse in the factories.

"There are student athletes here at Georgetown, and every time they go out onto the field or the court they are wearing the Nike swoosh or Jumpman logo that was launched here at Georgetown with St. John's and one other school," Keady said during the event.

"Georgetown was used, and the administration and elected parties used the student athletes and continue to do so. They have turned [student athletes] into walking billboards for a company that violates everything this Catholic Jesuit institution stands for," Keady said at the event.

The next day, students were photographed with tape covering Nike's iconic swoosh on their shoes.

According to Keady, Nike's longstanding relationship with Georgetown is motivated by Nike's desire to align itself with a Catholic institution and the upright morals it stands for.

Nike's ethically suspect labor practices have been getting heat for years, from Keady and others. Once called a "Nike nemesis," Keady has spent years putting public pressure on Nike; as he wrote in the Huffington Post, he spent time living and working alongside garment workers in Indonesia.

In 2008, Keady ended up resigning from a coaching position at St. John's University after he was pressured to wear Nike gear.

In a response to the Georgetown Voice, Georgetown licensing oversight committee chairman Callahan Watson defended the university's partnership by referencing its licensing code of conduct, which sets work and wage standards that are designed to be socially responsible.

"We require these companies to act in a socially responsible manner and abide by the code of conduct for Georgetown University licensees as a condition of their licensing contracts with the university," Watson wrote to the Georgetown Voice via email.

The university may quibble over the exact requirements, but for students who've sat in talks about garment workers rights overseas, not to mention read horrifying headlines or seen powerful documentaries, it's hard to ignore the issues impacting those who make Nike clothing and the rest of our "fast fashion" gear.

As a household name, Nike has been a target for many activists. In 2011, the Associated Press reported on the harsh conditions in Nike's Indonesia sweatshops, with workers saying supervisors are intensely violent, throwing shoes at workers, slapping them and calling them dogs and pigs. A decade ago, Nike also came under heavy criticism for its reported use of child labor. And in 2012, the company agreed to pay workers $1 million in owed overtime wages.

It was reported earlier this year that Nike still remains the most popular brand for young people today. But apparently that's not the case for students hip to the brand's labor practices. College students took a similar stand back in the late 1990s and now they're starting to again.

"A lot is going to depend on passion of students and their creativity and wisdom," justice and peace studies professor Eli McCarthy, who brought Keady to campus, told the Hoya. "As a school in the nation's capital and as a Jesuit school with a good reputation for intellectual thinking and social justice, there is definitely potential within the system to broaden this out."