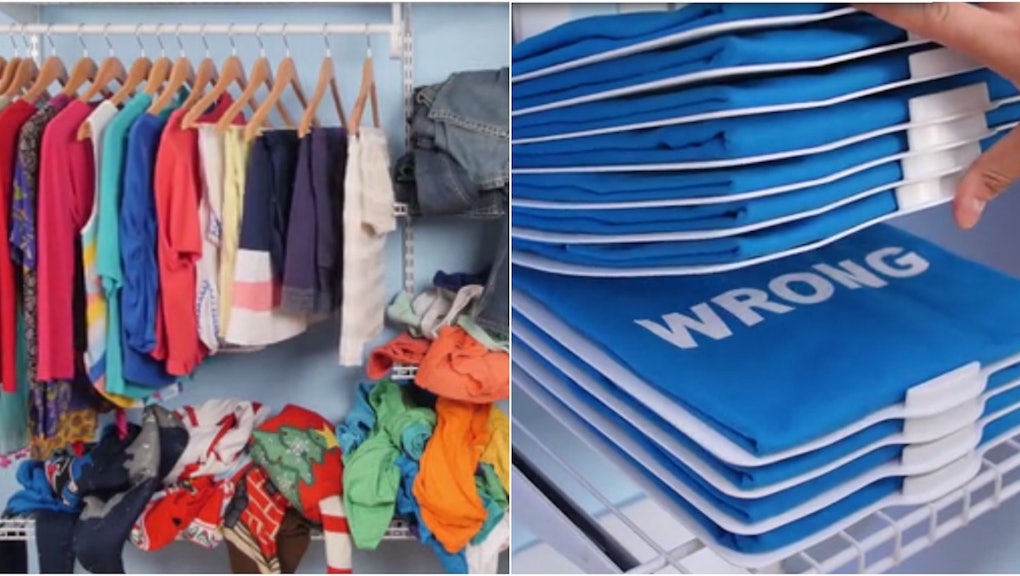 People Hate Folding Clothes So Much They've Pledged Over $70,000 for a Kickstarter

If you've ever complained about doing laundry, you're not alone. It's not the bouncy feel and fresh post-wash scent that we hate but the folding, especially because the results rarely last. (Just think of the mess after reaching for the shirt in the middle of a stack.)

That deep loathing — and let's face it, laziness — is probably why a recent Kickstarter campaign is skyrocketing past its $50,000 goal, with $73,751 and counting. ThreadStax is the latest laundry invention, and it includes a set of plastic slides and brackets, plus a "folder" that help quickly get clothes into that perfectly flat fold.

The apparent innovation here is the magnets on the brackets, which hold each of the plastic stackers in place. That detail makes it easy to pick out a single item and draw it out without messing up the entire pile.

The stacked pile can then sit in your dresser drawers or closet.

Is this a totally novel idea? Not exactly. Folding devices are nothing new, with plenty of other folding boards out there to make folding shirts a quick, seamless process. (For its part, ThreadStax's folding board comes with pliable hinges that are supposed to make the board less susceptible to breakage.)

Entrepreneurs have even created folding robots, including Japanese-made Laundroid and the very slow-moving FoldiMate. As for stacking, EZStax also relies on plastic dividers that are stackable, although without the magnetic strip.

In short, we'll labor for hours to come up with inventions that outsource menial tasks for us, even if they don't require a ton of time and effort.

So far, ThreadStax has raised far beyond its initial goal on Kickstarter, thanks to the help of some 450 pledges, and it still has 15 days to go.

Even if it gets funded, though, ThreadStax won't be available until 2017, meaning our closets might have to remain messy for a while longer.

Might as well do as as Bed Bath & Beyond apparently does and just fake it.