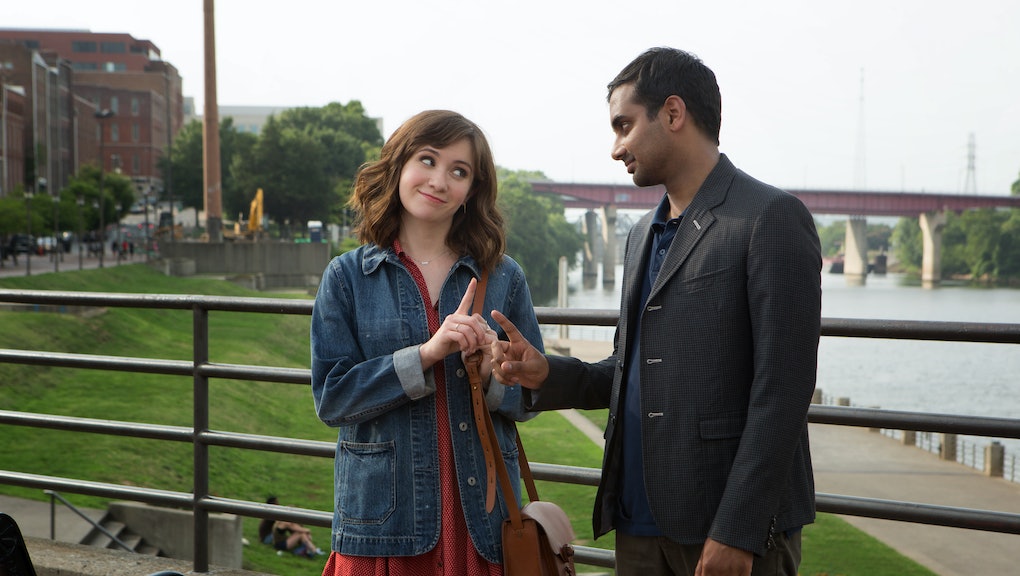 It starts with sex. Quite literally, in the case of Aziz Ansari's new Netflix series Master of None. The show opens with a shot of a darkened apartment, where the vague shapes and unmistakable sounds of two people having sex can be made out. Suddenly, the male set of moans turns to alarmed cries: the condom has broken.

The pair quickly assesses the situation, wondering: Can women even get pregnant from pre-cum? They're not sure, so Dev (Ansari) and Rachel (Noël Wells) do what any modern day sex partners would do. They pull out their phones and get to Googling. Even the Internet doesn't know the answer, though, so she decides that they should go the safe route and get Plan B.

At the pharmacy, Dev pays for the pill, excitedly finding and buying Martinelli's apple juice in the process. There is a lovely moment as the pair rides quietly in the Uber. Rachel holds up the Plan B package, gazing at it with resignation. Next to her, Dev holds up his Martinelli's, twisting off the cap with that familiar pop before taking a long sip. It captures perfectly the juxtaposition between the simple pleasures of childhood and the complicated responsibilities of adulthood. These two are somewhere in between. And the dating part of adulthood is particularly messy and awkward.

From this very first scene, before the credits have even rolled, Master of None has made its purpose clear. This is a show that portrays — with brutal honesty — all of those sticky parts of romance. What Ross and Rachel were to the '90s, Dev and Rachel are to the 2010s.

Between his frank stand-up comedy and his bestseller, Modern Romance, Aziz Ansari has become the unlikely poster child for dating in this decade. Master of None continues this legacy as Ansari (who also created, wrote, directed and produced the show) uses the series to take an unflinchingly candid look at how technology has revolutionized the ways we date, mate and communicate. Sometimes it's for the better; sometimes for the much worse.

The scenes we watch find Rachel and Dev next meet by happenstance, outside a club where Dev has just abandoned a disastrous date. She invites him to an afterparty, but he has plans with a friend first. So instead of abandoning everything for the possibility of sex, he actually goes to meet his friend, telling Rachel he will try to stop by afterward. It's tiny, subtle moments like this one that make us feel we are watching a real life happen instead of a formulaic sitcom.

When Dev does meet Rachel later, the chemistry between them is palpable. They dance and exchange witty banter, until the end of the night finds them standing on a street corner, saying goodbye. Dev leans in to kiss Rachel, which seems like a completely logical progression — we just saw a montage of them dancing to "Return of the Mack," after all. But she leans away, cringing uncomfortably. Her ex has just moved back into town, she explains, and she wants to see where things go with him.

If this was The Affair, Rachel and Dev probably would have made out passionately, ex-boyfriends be damned. Yet Master of None has proven to be something else entirely. Instead, the episode ends on a lonely shot of Dev standing by himself on the street corner. Here it is again: messy and awkward. It's real.

Rachel reaches out three episodes later to say that things are done with her ex-boyfriend, much to Dev's surprise and delight. He wants to ask her to dinner but his friend Denise shoots this idea down. Everyone does dinner; dinner is boring. She has just seen an email about $50 flights to Nashville, so why not do something bold?

This scenario could easily feel far-fetched, but Dev voices that concern and Denise counters with compelling arguments. Spending 24 hours together eliminates the convoluted texting dance that happens the morning after a date these days. It shows that Dev is adventurous and it will give them quality time to just be together. The fact that tickets are so cheap, that Rachel loves the idea and that this is not some random girl but one Dev has already been intimate with, makes this situation feel plausible rather than contrived. Off to Nashville they go.

The interactions between Rachel and Dev on their trip hover somewhere between platonic and romantic. They are considerate of each other and make each other laugh, perhaps two of the most important building blocks of modern romance. After a day of gallivanting around Nashville, Rachel poses the question: continue to explore, or go back to the hotel and nap? Both agree to a nap.

Once back at the hotel, Dev and Rachel lie in bed facing each other, talking and joking quietly. Their faces are inches apart. He puts his hand on her arm. This is when they hook up, right? If television has taught viewers anything, it's that two people who clearly like each other a lot, when placed in a hotel bed, are going to have sex.

But this isn't ordinary television. Because in the next moment, Rachel and Dev do the unthinkable: They actually take a nap. This is not Ross and Rachel outside Central Perk in the rain on Friends. It is not Mindy and Danny in the airplane bathroom on The Mindy Project. It is not Piper and Alex crashing around in the prison library on Orange Is the New Black. These are two people who, despite an undeniable sexual connection, have been walking around all day. They just want to nap next to each other.

Back in New York City after 24 hours straight together, Dev makes a wild suggestion to Rachel: Does she want to keep hanging out? And she does. This episode also ends with a shot of the street corner but this time, Dev is not standing in forlorn solitude. He is walking away with Rachel.

This is the same Rachel he nearly impregnated in the very first seconds of the series, whom he has fumbled through many modern dating conundrums with since then. It's not at all what we have come to expect from romantic arcs on television. But it rings so incredibly true to the experiences of this generation: hooking up, messing up and generally being, as the title suggests, not exceptional at any one thing.

Dev and Rachel embody the quintessential Millennial couple: They are not doing things perfectly, in the right order or by the book. They are not looking for a guarantee that they are soulmates or even looking past the next morning. But they keep trying, with near-foolish levels of determination and hope, and we are going to keep watching them try. If Dev and Rachel can make it work, maybe the rest of us can, too.