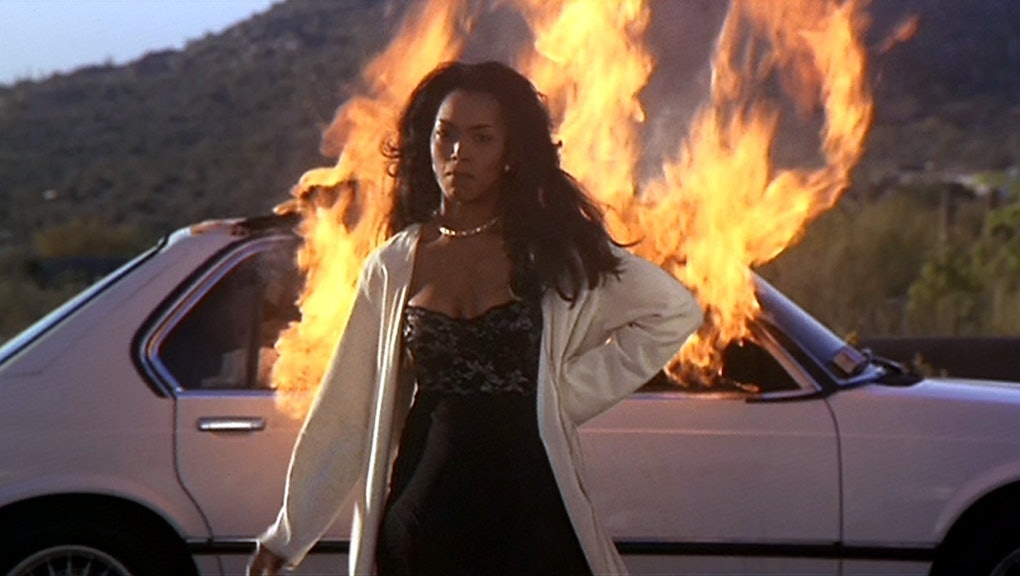 In Praise of the Woman Who Sets Shit On Fire

My favorite song to sing at karaoke bars is Alanis Morissette's 1995 anthem of post-breakup rage, "You Oughta Know." It also happens to be my favorite song to work out to, drive to, ride a train to, drink liquor to, cry to, scream to, go on a five-mile run to, aggressively dance around my living room to and generally just lean on whenever I need to feel an emotion for a few minutes.

Morissette's lyrics are detailed enough ("would she go down on you in a theater?" FTW) to feel genuine and raw and specific to her own experience. Yet they're also open-ended enough to evoke basically every bad breakup ever, which is what makes it such a satisfying vehicle for catharsis.

With her uncensored expression of pure anger and total disregard for caring whether or not she comes off as "crazy," the song is emblematic of something I've learned to be true over the years: We're all suckers for a good scorned lover's revenge fantasy.

My particular love for rage-fueled acts of emotional retaliation started way back in 1999, when I was 11 years old and packing up all my shit for a move. After going through a drama-fueled divorce, getting stuck with a mortgage she couldn't afford and subsequently filing for bankruptcy, my mom foreclosed on the house we lived in. Meanwhile, my dad had already remarried and moved into a beautiful home with his new wife.

Once my mom and I finally moved our shit to a rented condo across town, we went back to the old house for one final walk-through before the bank took it over. We were both numb as we moved from room to room, the house stained with memories of late-night screaming matches and angry tears. Eventually, we reached the upstairs bathroom, where two full cans of shaving cream had been left in the cabinet.

I don't remember exactly whose idea it was to use the shaving cream as a weapon. I just remember that five minutes later we collapsed on the floor in the hallway, exhausted from violently spraying the house's walls with the creamy white foam until our respective cans ran dry. Although our house was being taken from us, we had at least let some anger out and left the situation with a pointed "fuck you."

Later that year, I came across an episode of VH1's Behind the Music featuring R&B girl group TLC. Amidst the hit singles and record label drama was the narrative of Lisa "Left Eye" Lopes' combative relationship with her NFL player boyfriend Andre Rison. The episode climaxed with its description of what began the night of June 8, 1994 when, after a particularly heated argument in the couples' driveway, Left Eye came across 20 boxes of tennis shoes that Rison had bought.

"I had been drinking, and there's no size 4," she said in the segment, alluding to her own shoe size. "And I don't know, man. I threw a pair of sneakers in the tub and lit them. I lit them on fire."

And just like that, the entire house went up in flames. Left Eye, in her willingness to not only embrace her feelings of relationship rage but allow them to burn a house down, became my hero. What my mom and I could only do with shaving cream, she did with actual fire.

While I romanticized the Left Eye episode as a child, I realize how problematic it would be to do so as an adult. Left Eye and Rison's relationship was fraught with abuse issues, and she was struggling with her mental health at the time. As an adult, I realize there's nothing necessarily aspirational about any of that.

I'm also aware of how problematic the whole "hell hath no fury like a woman scorned" trope can be when women's actions are taken out of context, usually in an effort to reduce women to "crazy" or unhinged" creatures incapable of controlling their emotions. The best example of this in recent memory is the media's treatment of Taylor Swift. After writing enough of her own "You Oughta Know"-esque breakup songs over the years, Swift has been labeled a "crazy bitch" so often that she eventually felt compelled to combat the stereotype by adopting a satirical scorned woman persona in the video for "Blank Space."

Although Swift actively fought the media's perception of her, it's worth noting that some actually find the scorned woman trope to be empowering. "It's an annoying cliche, but not, paradoxically, wholly unflattering to the sex," Sadie Stein wrote for Jezebel back in 2008. "'The woman scorned' is something of a folk heroine." This is because, she argues, "women have always been expected to take what was dished out; infidelity, humiliation, degradation was her lot in life. So when they fight back, it's justice."

This argument suggests that an act of scorned lover's revenge may go deeper than just the relationship drama it's tied to. It can also be a middle finger to the idea that men are entitled to treat their partners like garbage, a pointed response to a patriarchal system of oppression and a "fuck you" to male privilege.

"'The woman scorned' is something of a folk heroine."

But women aren't the only ones who may feel compelled to lash out at the men who wrong them. As a gay man, I can also relate to being lied to, cheated on and unceremoniously dumped by certain types of men in relationships. And there's just something so satisfying about the fantasy of engaging in extreme behavior in retaliation.

This is probably why my workouts are all scored to motivational anthems of unapologetic female rage, like Carrie Underwood's "Before He Cheats," Beyoncé's "Ring the Alarm" and Rihanna's under-appreciated 2007 gem "Breakin' Dishes" (in which she furiously breaks dishes). It's also probably why, when I found out my first boyfriend slept with numerous dudes behind my back throughout the course of our live-in relationship in college, I developed an obsession with the '90s movie Waiting to Exhale.

In the film, the main character of Bernadine (played by Angela Bassett) is abruptly left by her husband for a younger white woman after 11 years of marriage. So in a raw, captivating act of fury, she ransacks his bedroom closet while randomly screaming nonsensical things to herself like, "Well, guess what John? YOU'RE THE MOTHERFUCKING IMPROPER INFLUENCE!"

She then throws his entire wardrobe into his car before backing it out of the garage, dousing it with gasoline and setting it on fire.

In her new book Furiously Happy, author and blogger Jenny Lawson wrote that while having the urge to unleash our pain via dramatic explosion scenes is probably natural, deferring to that urge is obviously not the best course of action in real life. "Sometimes we're made from the stuff that we want to do but don't actually follow through on," she writes. "Like when someone is an asshole and you want to burn down their garage, but then you don't because it's illegal and also because you can't find the matches. I'm made from a lot of unfulfilled arson."

Queen Alanis herself co-signs on this philosophy. In a radio interview with Howard Stern last month, she addressed the topic of scorned lover's revenge fantasies directly after she refused to tell Stern who "You Oughta Know" was actually about.

"I believe in artists writing and humans indulging the revenge fantasies. I think it's really important, because it can pull us out of depression, it can just pull us out of despondency and devastation," she said. "But I don't believe in the acting out of revenge. And if I were to have told who this song was about and given names and numbers and addresses, that would have been me acting out the revenge. I'm not into that."

"I'm made from a lot of unfulfilled arson."

It seems there is a very fine line between simply having the emotions that may inspire us to seek revenge on the men who've screwed us over, and actually carrying them through to execution. Sometimes we'll let ourselves give in to our pain just a little, like when my mom and I sprayed the shaving cream. Other times, we'll have to work through the pain on our own or find some other method of channeling the energy out of us in a way that doesn't involve breaking any laws.

Like Lawson, I'm sure we're all made from a certain amount of unfulfilled arson, and that's a good thing. But damn, it sure can be cathartic to watch someone else fulfill it for us.