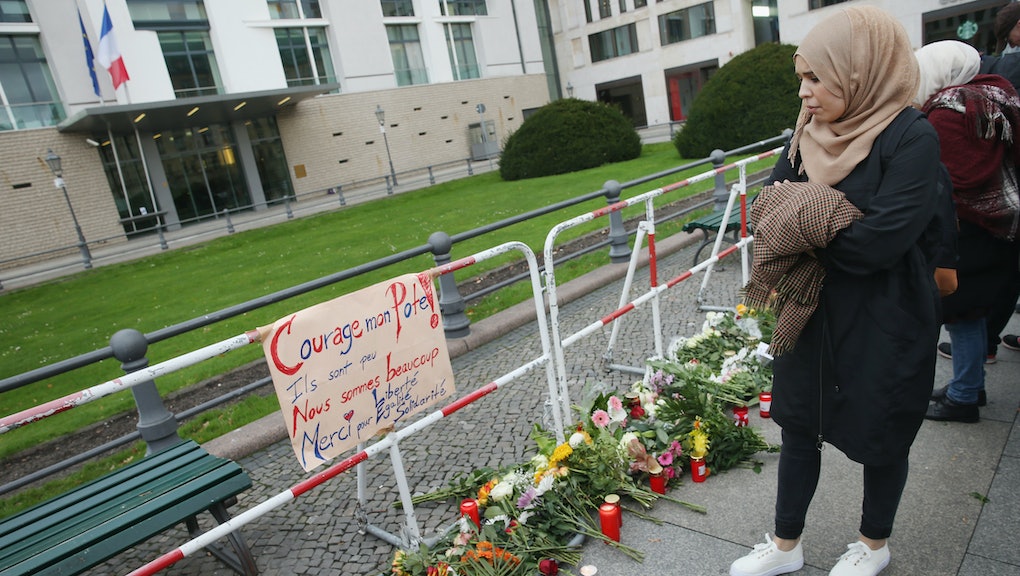 Muslims Around the World Defend Themselves Against Islamophobia and Offer Solidarity

"French Muslims are French. Today, at least, they should be more French than Muslim, as today the tragedy is for all of France," Daniel Hurlin, a Parisian designer speaking about the aftermath of Friday's coordinated Islamic State terrorist attacks in Paris, which left more than 120 dead, told Mic.

Hurlin spoke of some of his friends' frustration at the media's treating Muslims as a separate contingent. There is no such thing as "Muslim solidarity" in France, he noted, because Muslims there are first and foremost French. "It's true that media here, generally speaking, haven't given much space to moderate Muslims to condemn these attacks," he added.

Social media has also functioned as the ideal forum for those wanting to categorize Muslims as "the other." Islamophobes swiftly made themselves known, blaming the religion and all of its adherents for the acts of a handful of fanatics.

Even Marine Le Pen, leader of the far-right National Front Party, one of France's largest political parties, made sure to blame Islam for the horrendous attacks. Her tweet translates as "A cold anger squeezes our heart," followed by "#IslamistTerrorism."

After the attacks, the phrase "I am Muslim" went viral in the Muslim community, condemning the attacks and offering solidarity while simultaneously having to defend the religion. One handwritten letter which declares, "They [ISIS militants] are terrorists... not Muslims!" began circulating, getting retweeted by a number of Muslims.

A miscellany of tweets and messages from Muslims emerged, reiterating a similar message:

Farhan Khan Virk, a Muslim social and political activist based in Pakistan, has been particularly vocal about the attacks and uses social media to counter bigoted stereotypes of Islam.

One of his tweets on Islamophobia, posted in the aftermath of the Charlie Hebdo attack in January, gained traction after Friday's attacks. "We are extremely sad at the Paris attacks and we condemn them in the most strongest words, being Pakistanis we share the same pain they do," Virk wrote to Mic.

Hurlin warns the far-right will be able to capitalize on the swelling Islamophobia. "There's a general feeling this is going to profit the extreme right in France because it kind of confirms what they're saying [about Muslims]," he said.

"But the whole Islam debate is so fake: There's obviously one enemy, and it's not Islam," he added.