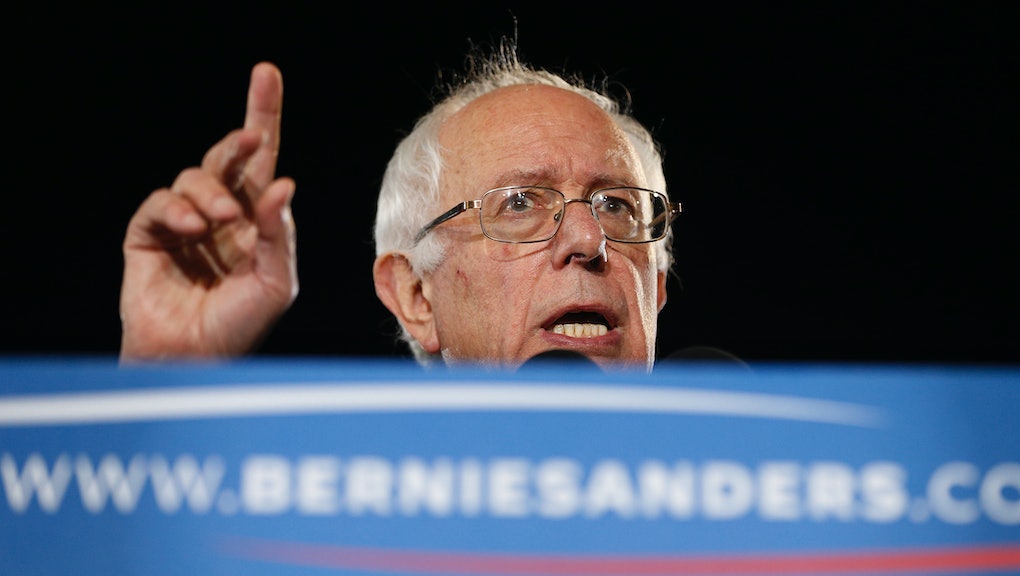 Twenty-four hours after a series of terrorist attacks in Paris left at least 129 people dead, top campaign officials for Democratic presidential candidate Bernie Sanders have made it clear the independent senator from Vermont isn't that interested in talking about it.

After being informed the agenda of Saturday night's debate on CBS had been shifted in light of the siege of Paris, a top Sanders aide "threw a fit" during a conference call with producers and other campaign staffers, a staffer for a rival campaign told Yahoo News. The aide's concern: Expecting a presidential candidate to shift focus due to an unanticipated international incident isn't fair.

"It was a little bit of a bizarre scene," the staffer told Yahoo News. "The Sanders representative, you know, really laid into CBS and basically ... kind of threw, like, a little bit of a fit and said, 'You are trying to turn this into a foreign policy debate. That's not what any of us agreed to. How can you change the terms of the debate, you know, on the day of the debate. That's not right.'"

Another source told CNN that the aide, identified as strategist Mark Longabaugh, was greeted with stunned silence after the outburst.

"Once CBS informed the campaigns the debate was going to kick off with a focus on the attacks in Paris last night, [Longabaugh] completely lost it," the source said. "He threw a fit for several minutes."

A last-minute change: The flare-up centered around CBS' decision to reorganize the Democratic debate in order to highlight the candidates' views on terrorism, foreign policy and national security. CBS wanted to cut the candidates' opening statements from 90 seconds to 30 seconds, before jumping into an in-depth, 20-minute discussion of the Parisian attacks, the use of military force in the war on terror and the future of tens of thousands of Syrian refugees seeking safe harbor in the United States.

"American leadership is put to the test," Steve Capus, executive editor of CBS News and the executive producer of CBS Evening News, told the New York Times after the decision to shift the debate's focus. "This is exactly what the president is going to have to face."

The Sanders camp's rancorous response to the decision by CBS is a healthy indication his campaign is worried that he may be outflanked on the issue of foreign policy by Hillary Clinton. Earlier in the day, a senior Sanders strategist went so far as to say that the debate's new direction was a coup for the Democratic front-runner.

"I think everybody realizes that Hillary Clinton's experience as secretary of state gives her a lot of standing," Tad Devine, a Sanders campaign senior strategist, told MSNBC, adding that Clinton has "a huge advantage" in this arena.

But that reportedly didn't stop Sanders' team from trying to halt the debate's new focus. Speaking to Politico's Annie Karni, Sanders campaign manager Jeff Weaver insisted that while Longabaugh's tantrum may have kept the candidate from facing questions he might have had a hard time answering:

"They wanted to make some last-minute changes to the debate," Weaver told CNN. "We obviously wanted to keep the format to what had been agreed to and I think people on our staff argued vigorously to that and were successful. We ended up prevailing."

Ready to lead? The dust-up highlights concerns that a President Sanders might not be so comfortable with the position of commander-in-chief as some of his Democratic rivals. Sanders has faced criticism before for a perceived lack expertise on matters of foreign policy and national security, and when pressed on issues relating to terrorism or diplomacy frequently defaults to pointing out his 2003 vote against authorization for the use of military force in Iraq. Clinton, meanwhile, possesses a most comprehensive background in foreign policy and national security, with a hawkish reputation on military intervention in both humanitarian and national security contexts.

For Sanders, news that his campaign pushed as strongly against debating national security in the wake of the attacks makes him look out of touch at best, and unready for the role of commander-in-chief at worst. After his first debate performance led to critiques of Sanders as a one-note candidate with a myopic focus on economic issues, his reported disinterest in discussing a most pressing geopolitical crisis may add fuel to the argument that Sanders is less interested in being a leader than an agitator.