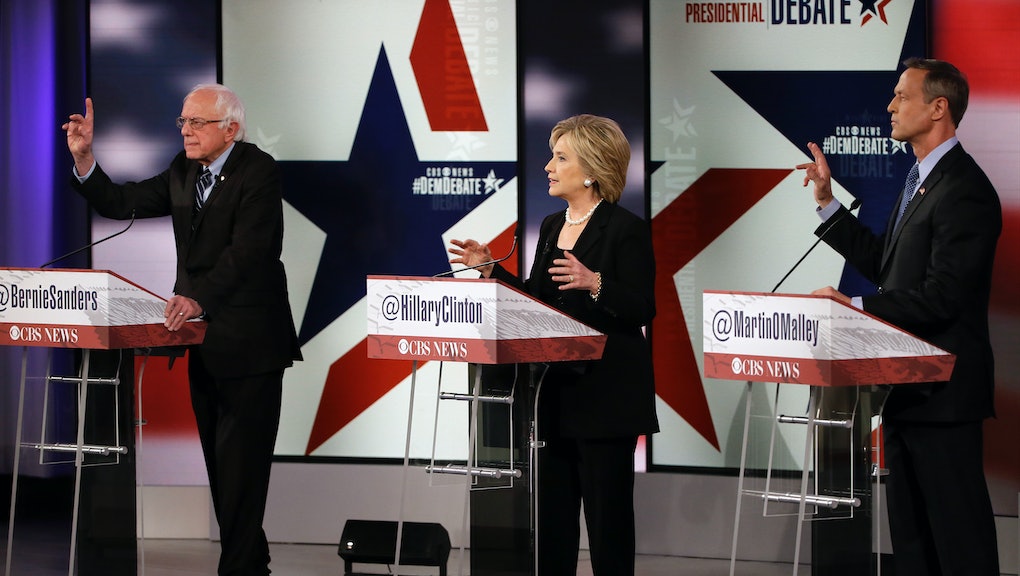 This Was the Most Revealing Exchange From the Second Democratic Debate

Des Moines, Iowa — Going into the Democratic debate, just one day after massive terrorist attacks rocked Paris on Friday, it seemed obvious the most aggressive jousting onstage would be over diverging opinions on national security priorities. Between Hillary Clinton's hawkish record and Sen. Bernie Sanders' perceived weakness on matters of foreign policy, the major divide of the night was expected to be over the role of the United States overseas.

But the debate about terrorism and ISIS was remarkably free of conflict, and there was a huge amount of consensus on how to eliminate their power in global affairs. The biggest moment of the night actually centered on a right between Clinton and Sanders that's incredibly well established: Wall Street.

As you might expect, Clinton spoke about reforming Wall Street, and Sanders said her plan was anemic in comparison to his. But the actual way they went about describing their differences should be considered revealing for voters, and a prism into the sharply differing views they hold about the relationship between capitalism and democracy.

The major exchange of the night came about when Sanders nonchalantly rebuffed Clinton's attempt at downplaying the idea that bankers' donations shaped her values as a politician.

Debate moderator John Dickerson asked Sanders, "You said the donations to Hillary Clinton are compromising — so what do you think of her answer?"

Sanders was amused as he explained the absurdity of a candidate claiming that they could be immune to the influence of their wealthiest and most influential donors. Insisting the idea that a candidate's priorities wouldn't be reshaped by the people they fund them was obviously "naive," he laid not just into Clinton but the entire campaign finance system.

Sanders brandished the fact that unlike his rival Clinton, he took no money from super PACs. While Clinton has supported the idea of campaign finance reform, her campaign is coordinating with multiple super PACS — organizations that can take limitless sums of money from corporations. And big banks play, as they have in the past, a major role in contributions to her campaign.

In other words, Sanders laid out how Clinton's campaign maintains the very kind of relationship between concentrated financial interests and governance that has led to the political crisis his campaign has formed to address.

But Clinton wasn't having it.

"He's basically used his answer to impugn my integrity," Clinton said to Dickerson to fight her way back into the conversation later.

After mentioning she does have plenty of small donors, Clinton took her argument in a strange direction.

Clinton's rebuttal was a complete dodge. She cloaked her relationship to Wall Street under the banner of patriotism, and equated the idea of supporting predatory banks with love of country. She was subsequently called out for invoking 9/11, and offered a weak apology to anyone who was offended.

Clinton and Sanders did dig into the weeds with a more nuanced policy discussion during the debate. Sanders argued, as he has in the past, that breaking up the big banks and reinstating the Glass-Steagall Act is a precondition for reining in Wall Street. But Clinton pushed back, saying Sanders focused on size at the expense of other kinds of financial institutions that threaten the economy.

While Clinton and Sanders seemed to differ on the means and agree on the ends sometimes, it was clear they differ on their core analysis of the moral integrity of Wall Street.

When Clinton said if big banks don't play by the rules, they should then be broken down and prosecuted, Sanders responded, "Who are we kidding? The business model of Wall Street is fraud."