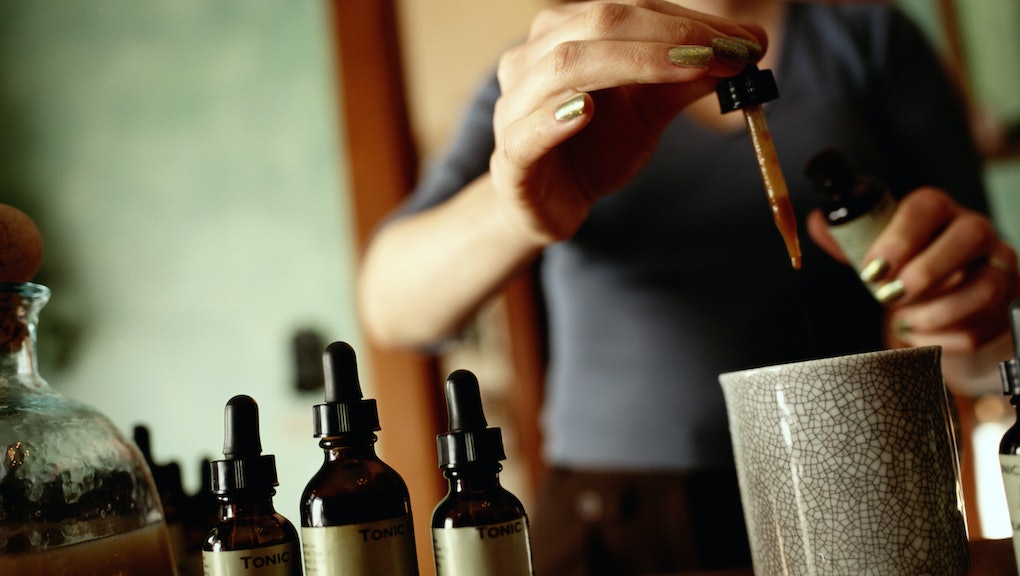 With every fresh effort to curtail reproductive rights comes an uncomfortable reminder: Limiting access to abortion doesn't limit the need for abortion, nor does it stop abortions from happening.

It does, however, make the prospect of terminating a pregnancy dangerous, as women take any measures necessary to regain control of their bodies and their lives. History should be an indicator, but we don't even have to look back that far: According to estimates in a Nov. 2015 report from the Texas Policy Evaluation Project, as many as 240,000 women in Texas, where abortion restrictions have shuttered the majority of the state's clinics, have attempted to self-induce an abortion.

These women might not be resorting to coat hangers quite as much as in earlier eras, but the ways in which they're trying to orchestrate their own abortions aren't necessarily an improvement. A number of women have begun to seek out home remedies like herbs and vitamins, finding information about self-induced abortion "from a trusted friend or a family member or from internet searches," according to TxPEP.

In a country where abortion is technically legal, it should probably tell us something that women are turning to herbs and the internet to perform the procedure themselves. And according to experts, that something isn't good.

The information that's out there: A quick Google search including any combination of the words "herbs" and "abortion" or "miscarriage" will turn up plenty of results, but much of the information isn't new.

Herbal medicine has been used since ancient times for various aspects of reproductive health. And while these guides are now disseminated (or should we say "dis-ovulated"?) online, the basic means of passing down the information is essentially the same, said Virginia Ahearn, a certified professional midwife and herbal medicine practitioner. Blogs are the "word-of-mouth" of the 21st century.

"Herbal medicine and this information has historically been passed on woman to woman, generation to generation, and now the internet has perhaps taken that place," Ahearn told Mic.

Today, many of the guides to herbal abortion come from blog posts or Reddit or websites that look like their copyrights are from the early days of the World Wide Web (and in some cases, they are). Search results are dominated by firsthand accounts of terminating a pregnancy with natural remedies like wild carrot seed, blue cohosh or dong quai.

While many include disclaimers indicating they're not guides to herbal abortion per se, they still provide step-by-step information for self-induction. One of the most well-known sources, Sister Zeus, contains a week-by-week guide to pregnancy with information on herbs, also offering a list of risks and expected outcomes in the name of simply giving women resources.

The site also offers a number of other resources regarding reproductive health within the medical field, such as referrals to Planned Parenthood, in addition to information about natural abortifacients. (Mic reached out to Sister Zeus for comment but did not hear back by press time.)

According to Dr. Leah Torres, an OB-GYN who works with the advocacy group Physicians for Reproductive Health, the online spread of alternative methods of terminating pregnancy isn't a sign of DIY culture taking hold. Instead, it reflects the erosion of reproductive rights.

"The fact that women are resorting to herbal methods is reminiscent of underground abortion methods before the procedure was legal," Torres told Mic. "Before we had modern medicine, people did things like this. Why are we going back to times pre-modern medicine? We should not be going to these solutions. This is not what modern medicine has available."

Herbalists actually tend to agree. Susun Weed, an author and authority on herbal medicine, told Mic she won't advise a woman on herbal abortifacients unless the patient makes an appointment for a medication abortion or a surgical D&C first, because herbs simply don't have the same level of efficacy.

Another clear way women can be harmed is with a lack of information about herbs, not necessarily by the herbs themselves. Weed explained that one of the dangers of any herbal information online (or anywhere that isn't directly from an herbalist's mouth, really) is that women may not get answers to four critical questions.

Without that, said Weed, "what you have is folklore and not herbal medicine."

"Our bodies follow what our minds believe. And if a woman is undecided, then she's the one who's most likely to be harmed by the herbs."

Herbal abortion isn't inherently bad — but it's not a sure thing. Among women who self-induced in Texas, according to a survey of 18 of them, the natural remedies they sought out were often ineffective. All of the women who reported using herbs "ultimately obtained a surgical abortion when it seemed that their self-induction methods were not working." In New York City's Washington Heights neighborhood, where a 2011 DNAInfo investigation uncovered widespread use of herbs to induce miscarriage, the possibility of failure was a well-known consideration.

In some cases, an failed herbal abortion attempt can lead to a perfectly healthy pregnancy, undesired though it might be. But other times, herbal abortifacients can be dangerous, leading to fetal deformities without causing miscarriage. In some extreme cases, their use can put a pregnant woman's life at risk, as happened with Kris Humphrey, a 24-year-old woman who died after trying to self-induce an abortion with the herb pennyroyal, unaware she had an ectopic pregnancy.

"Generally, the concern is that people will use an herbal remedy, it won't work, and then they'll need treatment — whether for infection, hemorrhaging or bleeding to death — that would've been done anyway for an abortion or miscarriage," said Dr. Torres.

Added Virginia Ahearn, "[Herbal abortion] is not something where you just look up herbs, go to the store, buy them and think it's all going to work perfectly ... Women may end up interfacing with [the] medical system anyway, so they should be ready for that."

The biggest problem is not knowing all the risks. Sometimes, the herbal process works out exactly as intended, and women terminate their pregnancies with just some minor cramping. ("The Abortion Diary," a podcast of women sharing their abortion stories, includes some success stories.) But as clinical herbalist Crystal Honeycutt told Mic, even when these self-induced abortions do work, it's not exactly pleasant.

"You absolutely can induce an abortion, but that is a major thing," Honeycutt said. "Not only are you in a lot of pain, you might also be in a lot of emotional or spiritual turmoil. Your body is going through the ringer; you can inadvertently start hemorrhaging. The same risks with a medical procedure are amplified through herbal abortion."

Unlike medical abortion, however, herbal abortifacients haven't been studied so thoroughly, and their consequences aren't so predictable. That doesn't mean they're always bound to fail or they're inherently dangerous; it does mean there's a different level of risk involved, much of which is based on not truly understanding how toxic and powerful these remedies that manipulate the uterus can be.

"The same risks with a medical procedure are amplified through herbal abortion."

"Herbal medicine is medicine; it's not without a need for caution," Honeycutt said. "When you're engaging with really powerful plants, it's really important to feel like people are getting the right guidance, and feel like they're respecting the context in which they're engaging with the plant."

She also added that in the instances where she's witnessed women pursuing herbal abortion, typically in exceedingly poor, rural areas, they quite literally couldn't afford to take the care they needed to take in order to be safe. "That, to me, is the real issue of safety here," she said, "of how alone and scared so many women feel when they're searching for this information."

The real problem with DIY: It's not as if natural methods of inducing miscarriage don't have a long and storied history, but there's a difference between practicing herbal medicine and posting about it on Blogspot. As Ahearn pointed out, the difference in earlier eras was that "people knew who they were learning from," which provided an important safeguard the internet can't really offer. Experts can help, as long they're actually consulted.

"Part of my struggle is providing information that is going to be helpful and doing it responsibly," Ahearn said. "I think if women are going to get information off the internet, if they are able to find a practitioner or a home-birth midwife who has some real hands-on experience in how to use herbs correctly and wisely, then all the more power to them."

The problem, as medical practitioners of different backgrounds agree, is that women feel the need to take matters into their own hands in the first place — which, as Weed knows herself, can have dangerous consequences. Six years before the Supreme Court's ruling in Roe v. Wade, she nearly bled to death after trying to self-induce an abortion with a sterilized knitting needle. The issue today, she says, isn't so much with herbs or alternative abortion methods or even bad information online. It's the fact that women feel the need to search for this information at all.

But, she added, "there is no information on the internet that is as dangerous as limiting women's access to abortion."